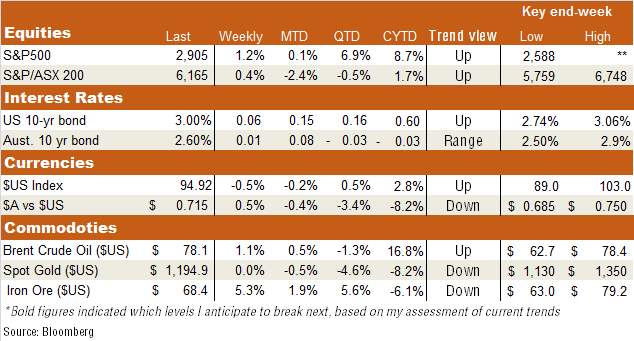 It was a generally positive week for global stocks helped by a “Goldilocks” pattern of US economic data and hopes of renewed trade talks between the US and China.  Stocks rose and US 10-year bond yields once again broke through the “psychological” 3% level.

On the data front, although headline August US retail sales missed expectations, upward revisions still have September quarterly growth looking rock solid. US job openings also hit a record high and the percentage of workers leaving their job voluntarily (the “quit rate”) hit a 17-year high of 2.7%.  Despite this apparent demand strength, however, last week’s US consumer price index report was a touch softer than expectations, with core annual CPI inflation slowing back to 2.2% from 2.4%.

Given the red hot US labour market, however, the previous week’s payrolls report showing a pick-up in annual average hourly earnings growth to 2.9% is where the real inflation risk lurks – indeed, accelerating wage growth remains the single biggest risk (but not yet reality) for the global equity bull run.  Note Fed rhetoric of late has also been fairly hawkish, with many voting members reiterating the likely need to keep raising rates for some time to come.

More mixed news came on the trade front, with reports that the US was seeking to engage China in another round of trade talking buoying markets mid-week, though reports that it was also readying to impose tariffs on another $US 200 billion of Chinese imports as early as this week dented market enthusiasm on Friday.  With Chinese economic data appearing somewhat soft of late, President Trump perhaps feels he can press a perceived advantage – threatening new tariffs while at the same time offering the olive branch of trade talks.  The question remains: who will blink first?

In Australia, economic data remained generally upbeat, with a solid rebound in employment in August and lift in the NAB measure of business conditions.  That said, consumer confidence dipped 3% in the month and the NAB measure of business confidence also eased further – with both likely affected by the renewed bout of political instability in Canberra.

With little major economic data of note, market interest will again likely focus on US-China trade tensions.  The hope of renewed trade talks remains a potential positive, though the possible announcement of news tariffs is a lingering negative.  Otherwise, key US PMI surveys covering the services and manufacturing sectors should affirm the US economy’s underlying strength.

The tightening global oil market may also look for any supply guidance that OPEC might offer in several mid-level talks due this week.

In Australia, the “official” measure of quarterly house prices will likely tell us what we already know from the monthly Core-Logic data, namely that house prices continue to ease, led by weakness in the once red-hot cities of Sydney and Melbourne.