Last week global markets got their first taste of the negative economic impact of the coronavirus – and it was not easily digested.  Although China continues to claim that the rate of new infections has peaked, Apple’s warning of disruptions to both Asian sales and production – and, perhaps more importantly, the surprisingly sharp drop in US service and manufacturing indices in February nonetheless took their toll.   Goldman Sachs also saw fit to warn that markets were not fully factoring in the likely negative hit to Q1 earnings.   All up, it was enough for the S&P 500 to gave back 1.3% last week, although it’s still up 3.2% so far in February.

Gold and the $US are the safe havens of choice in this environment, with the latter also helped by relative weakness in non-US economic growth.  Indeed, Japan’s economy contracted in Q4 following the October sales tax hike and there’s now some risk of a technical recession if virus concerns cause negative Q1 growth also.

With global equity PE valuations at historic highs (albeit arguably justified by low bond yields) and markets having shrugged off virus concerns so far, it’s probably reasonable for a pullback of sorts to kick in over the next few weeks (or even months) as the clear negative economic shocks – even if considered short-term – are absorbed. Also still troubling are reports of virus outbreaks outside of China – with South Korea, Italy and even Iran new areas  of concern.  With with regard to the virus itself, therefore, it’s still seems too early to conclude the worst is over.

As regards Australia, the RBA left rates on hold last week as widely expected, though also revealed a heightened level of concern that a further lowering in interest rates could lead to another bout of excess borrowing.  That said, last’s weeks data – continued soft wage growth and a lift in the unemployment rate to 5.3% – only affirmed the challenges ahead for the RBA.  Indeed, while still “OK”, employment growth has slowed over the past few months and is struggling to absorb lingering spare labour market capacity in the face of still solid immigration and rising workforce participation.  And all this is before the virus disruptions hit local tourism, retail spending and business sentiment.

There’s little in the way of major global data this week, though US durable goods orders on Thursday will attract interest – given its weakening trend of late and rising concerns over a potential slowdown in business investment.  The market will also be counting on Friday’s US consumer spending report for January remaining fairly firm.

In Australia. we get another set of “building blocks” for next week’s Q4 GDP report via the construction and capital spending reports. Both are likely to remain fairly subdued, with construction still being dragged down by weaker home building and mining investment still at best bottoming out.  Along with already known subdued 0.5% growth in Q4 retail spending volumes, Q4 GDP is hardly looking flash.  Note also we’ll get an update on business investment intentions with the capital spending survey on Thursday.  Especially in light of heightened coronavirus concerns, chances are the investment outlook will remain soft – and could even weaken a bit further. 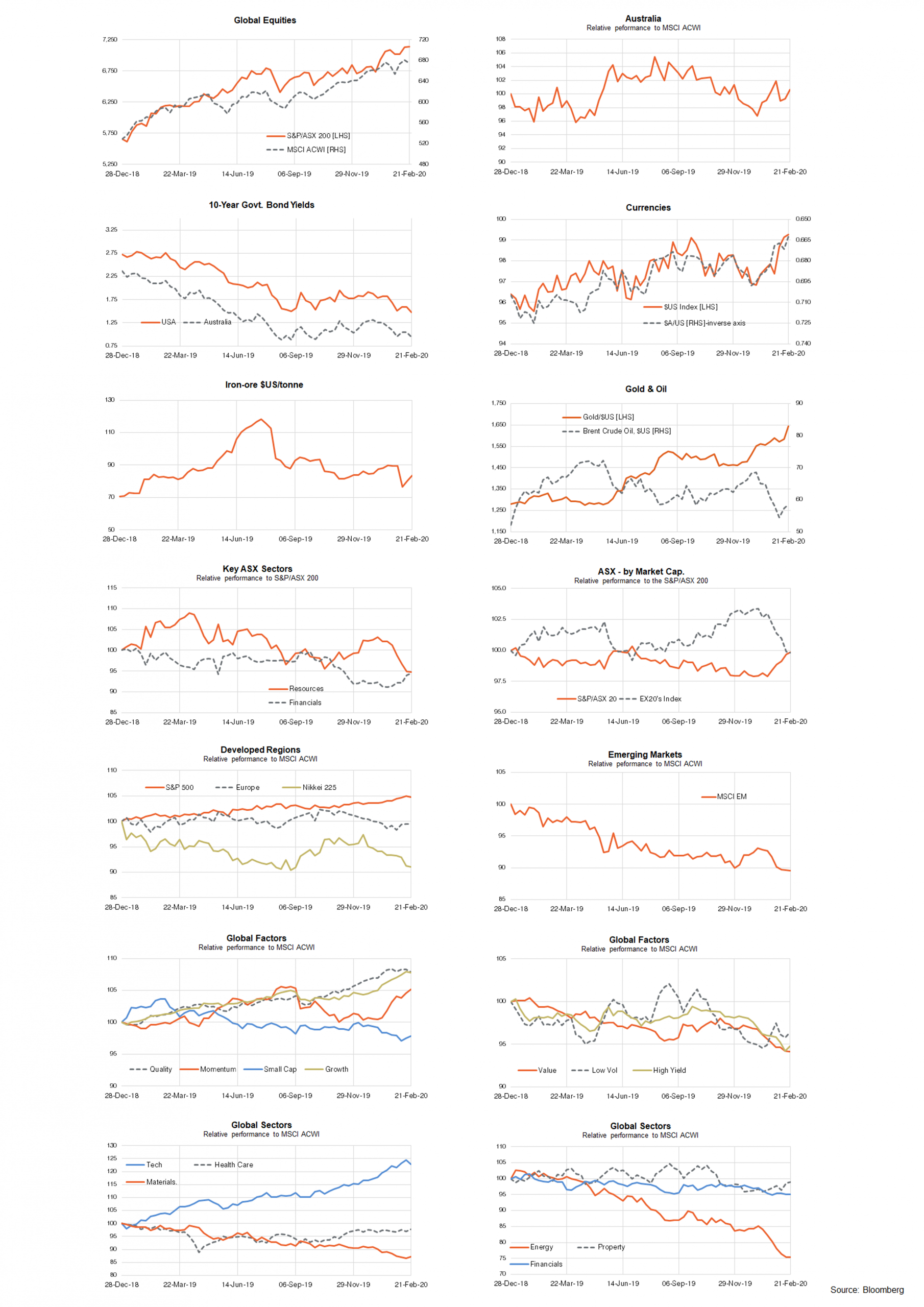