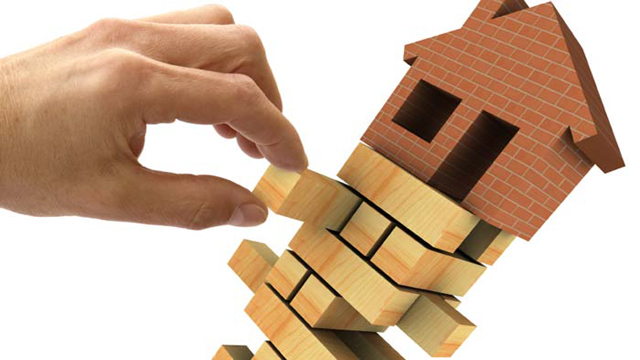 Much has been made this week of the claim by the Bank for International Settlements that local house prices may be seriously overvalued.  As seen in the chart below, this is based on the view that the current house price-to-income ratio and house price-to-rent ratios are around 40% and 50% respectively above their “long-run average”. These estimates also seem relatively high by global standards. Yet Federal Treasurer Joe Hockey is right to claim  this is “lazy analysis.” Specifically, these often cited international estimates of Australian house price valuations are seriously flawed, because they ignore the structural shift higher in house prices relative to both household incomes and rents since the mid-1990s, due to the structural lowering in local inflation and interest rates. They also ignore the impact of financial deregulation, which has allowed more Australians access to housing credit if they can afford it. 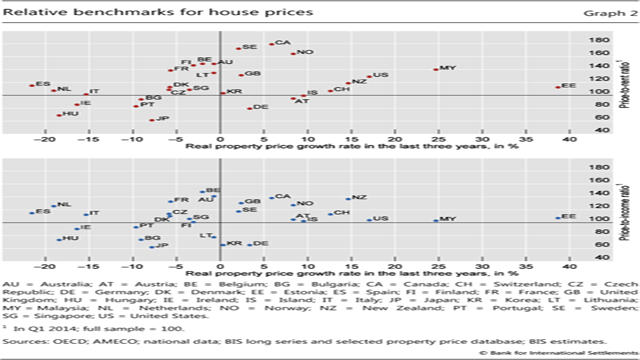 The BIS does not specify the time period over which these averages are taken but, at least in the case of Australia, the longer the time period used the more likely these flawed indicators will overstate house price valuations.  Indeed, as seen in the chart below, Australia’s house price-to-income ratio ratcheted up in the decade to 2003 as interest rates structurally declined. As a result, it is estimated that by the September quarter- assuming quarterly house price growth of 2.2% – the house price-to-income ratio was 30% above its average since 1986, but only 7.5% above its average since 2003.  The same results broadly hold for the house price-to-rent ratio – as declining interest rates have facilitated a structural decline in rental yields.

By my estimates, the house price-to-income ratio in the September quarter was still a little below the previous cyclical peak in March 2003, though a little above the more recent high in June 2010. 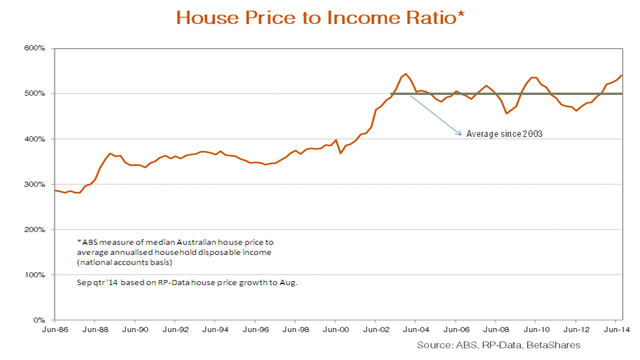 Indeed, despite all the hysteria regarding an Australian house price “bubble”, the most remarkable feature of prices over the past decade is how well behaved they have been. Overall, nation-wide house prices have broadly tracked growth in household disposable income – albeit with cyclical peaks and troughs.

A better measure of house price valuations – which at least allows for the structural change in interest rates over time, though not financial deregulation – is mortgage affordability.  As seen in the chart below, there has been no obvious structural worsening in mortgage affordability over recent decades. Assuming a 20% deposit, loan repayments to purchase the median-priced Australian house have averaged just over 30 per cent of average household disposable income since at least the mid-1980s. 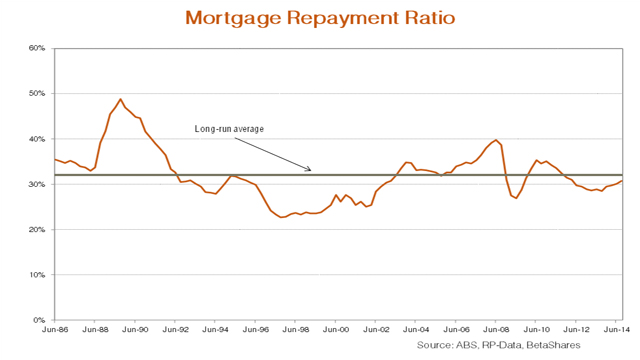 What’s more, despite the recent lift in house prices, the mortgage burden was still a little below average as at the September quarter – thanks to exceptionally low interest rates. That suggests further gains in house prices are entirely possible over the next few quarters – even pushing the house price-to-income ratio to even higher cyclical peaks.

Of course, the current lift in house prices is not without risk. The further house prices continue to rise relative to incomes in the current low interest rate environment, the more they will need to underperform income growth in the years ahead – assuming a “mean reversion” in the house-price-to income ratio as interest rates eventually rise to more normal levels.  One worry is that, based on more timely RP-Data estimates, house price growth appears to have picked up to around 2.2% in the September quarter after slowing to 1.5% in the June quarter.

Compared to cycles over the past decade, moreover, more of the reversion in the house price-to- income ratio will need to come through weak house price growth – rather than strongly rising household incomes – given the latter won’t benefit from rising commodity prices and incomes tax cuts.

This, however, is the danger posed by having to excessively rely on very low interest rates to support the economy at a time of stubbornly cautious non-housing related private spending, fiscal restraint, and a still uncomfortably high A$.