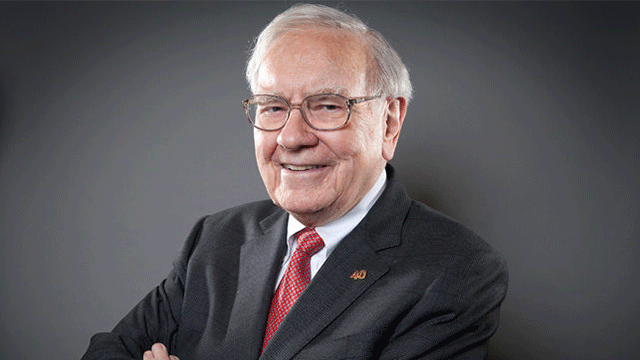 Famed American investor Warren Buffett is known to carefully assess his major stock purchases from a very long-run valuation perspective.  In this light, his recently revealed favourite stock is instructive for what it says about the US tech sector, and the NASDAQ-100 in particular.

Buffett – An Apple in his eye

In a regulatory filing revealed last week, Warren Buffett’s legendary investment vehicle, Berkshire Hathaway, announced that it has bought a further 31 million Apple shares in the December quarter 2017, taking its total holding to 165 million shares, valued at $US28 billion.

That meant Apple accounted for almost 15% of Berkshire’s total $US191 billion in assets, and in the process surpassed Wells Fargo Bank as its largest holding.  Berkshire first bought into Apple in March 2016 when it was trading at just over $US100 (down from a peak of $US132 the year before) and it has been a regular buyer of the stock ever since.  Apple is currently trading around $US172.

Why does Berkshire like Apple?  Any student of Warren Buffett’s approach knows he seeks to buy stocks with a reasonably reliable long-run earnings stream, especially when trading at an attractive price.  Reliability can arise from having a strongly defendable market position, such as through having a highly trusted brand name, special patents that can protect key products from copycats, or strong network effects that make it costly for consumers to switch suppliers.

Apple increasingly appears to enjoy many of these attributes.  Its brand name is well known and highly respected (even “loved” by many). It has developed a range of technically hard-to-beat- products for consuming media content, most notably the iPhone, and has also developed strong network effects and customer loyalty through the vertically integrated “eco-system” of  iCloud,  iTunes and Apple TV content platforms. Although Apple is working on several other new business ideas, such as driver-less cars, I suspect Berkshire is particularly attracted to what appears an increasingly reliable and growing stream of revenue from distributing media content.

What’s more, Apple is sitting on around $US250 billion in cash due to profits from global operations. Following the Trump tax cuts, Apple has vowed to repatriate some of this bounty to boost investment in the US, but a good chunk may also help fund share buy backs and/or a lift in dividends.

Apple also does not appear overly expensive. With a share price around $US172, it is trading at 14.8 times consensus earnings per share (EPS) for fiscal 2018 of $US11.60. That’s not bad considering earnings have grown at close to a 30% annual rate over the past decade. 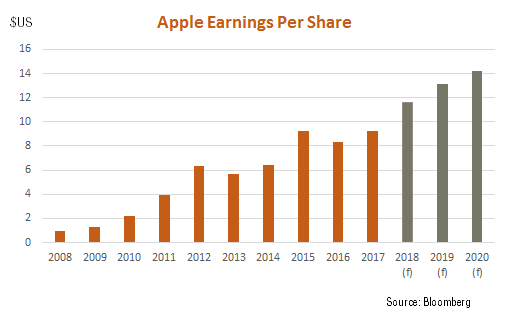 The NASDAQ 100 ETF (ASX Code: NDQ): Easy Diversification into the US Tech Sector

Of course, even though Buffett appears to love Apple, it still only accounts for 15% of Berkshire Hathaway assets – due to the need for diversification and manageable stock-specific risk.  Local Australian investors seeking to invest in tech darlings such as Apple also have an option to get diversified exposure to the whole US tech sector, through the BetaShares NASDAQ 100 ETF (ASX Code: NDQ).

NDQ has been one of my favoured investment ideas for several years, as evident here and here.

As evident in the tables below, the NASDAQ-100 Index includes many of America’s most innovative companies, and has around 60% exposure to US tech stocks.  Apple is presently the Index’s largest holding, with a 11.4% weight.  In a similar vein to Apple, it could be argued that many of the top NASDAQ-100 companies – such as Facebook, Amazon and Alphabet (Google) also enjoy strong market positions in their respective industries, due in particular to entrenched network effects.

As seen in the chart below, the NASDAQ-100 Index has performed strongly since the global financial crisis, with most of this performance attributable to solid earnings performance rather than escalating valuations. By end-January 2018, the Index was trading on a price-to-forward earnings ratio of 21.2 – which is close to its average of 20 since early 2003.  Forward earnings rose 20% over the past 12 months, and consensus forecasts suggest earnings growth of 12% over the coming year. 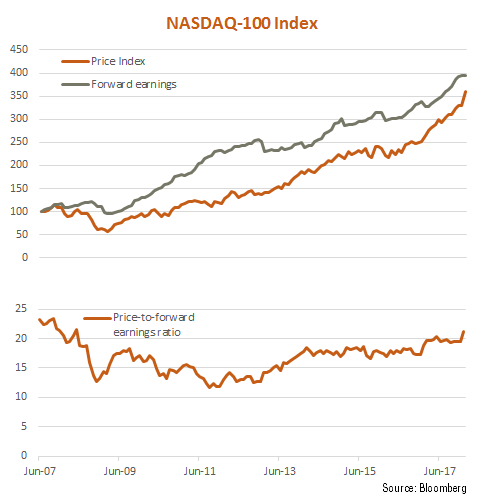 Further information on NDQ can be found here.