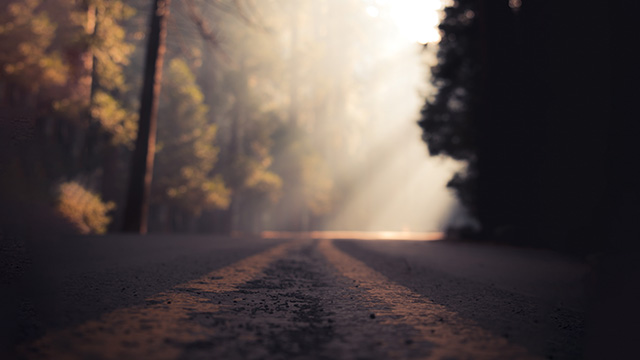 Amidst the current market turmoil, ASX-listed hybrids have been one of the more liquid and transparently-traded parts of the fixed income markets. Average daily trading volumes have approximately doubled from their long-term average, as shown in the chart below. In March, average daily turnover was more than $60 million. 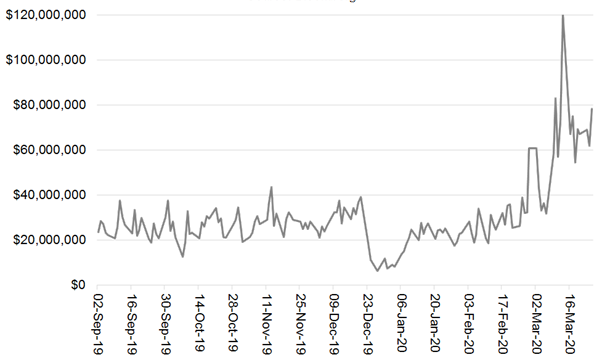 From 20 February through to 25 March, HBRD outperformed the Solactive Australian Hybrid Securities Index by 2.4%, net of all fund fees. HBRD has also outperformed its benchmark index net of fees since its inception in November 2017, remembering of course that past performance is not necessarily indicative of future performance.

Secondly, HBRD has consistently traded at or very close to its net asset value (NAV), primarily because the majority of its portfolio consists of assets that are traded on the ASX (i.e. hybrids), which can be quickly and easily priced.

The yield on hybrid securities typically is compared to the bank bill swap rate (BBSW), which is the primary benchmark used for the pricing of short-term Australian dollar derivatives and securities. The greater the spread, the higher the risk the market is attributing to the hybrid – and therefore the lower the price of the security and the higher the potential return.

The current crisis has seen an unprecedented increase in credit spreads on major bank hybrid securities, with five-year spreads above BBSW leaping from 260 basis points in September 2019 to 641 basis points as at 25 March 2020, as shown in the chart below. This exceeds even the spread at the height of the GFC.

Spreads have declined from this extreme in the last few days to be below 500bps, but remain well above historical averages. 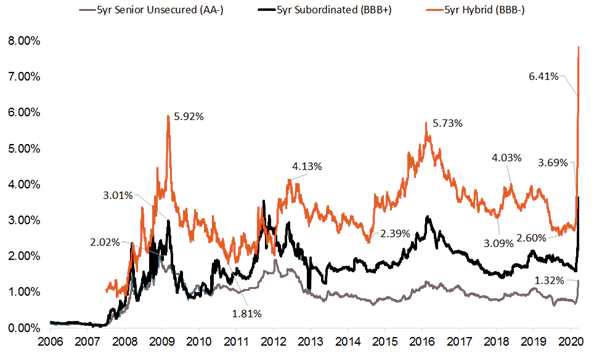 This has resulted in a large improvement in the expected yield to repayment (or the call date) on major bank hybrids, which are now around 7% p.a.1

Following every blow-out in hybrid credit spreads since the GFC, there has been strong mean-reversion, or normalisation, in spreads. If that trend is maintained, we believe the current pricing of hybrids potentially presents an attractive investment opportunity.

The table below summarises the peak-to-trough transitions in the 2008-09 shock, the 2011-12 Eurozone crisis, the 2015-16 Grexit crisis, and the 2018 correction and associated franking credit controversy.

Australian banks’ equity capital buffers are among the world’s best

In our view, the spreads we are currently seeing in the hybrids market price in a higher level of risk for bank hybrids than is justified.

One of the key protections underpinning hybrids is the large buffer of junior-ranking equity capital the major banks have built up over time. Australian banks rank among the best-capitalised banks in the world. The figure below (from CBA’s latest results presentations) shows where the big four banks are ranked by their equity capital buffers. On this basis, CBA is the best-capitalised large bank in the world. 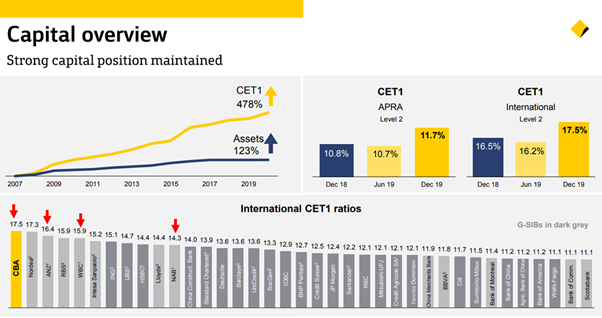 APRA regularly stress-tests the banks for a major recession, and models what would happen to equity capital buffers if Australian house prices were to fall by 35% and the unemployment rate to increase to around 11%, as was the case in the 1991 recession.

Hybrid securities are currently trading at spreads over BBSW that are very high by historical standards. On the basis that every credit spread blow-out since the GFC has been followed by a reversion to ‘normal’ levels, and given the financial standing of the major Australian banks, we believe that this presents investors with a potential buying opportunity.

1. Note: Yield to call is the measure conventionally used by the hybrid market. It assumes that the hybrids will be called on the first call date, an outcome that is not guaranteed.
2. APRA, https://www.apra.gov.au/testing-resilience-2017-banking-industry-stress-test

Investment risks include interest rate, credit, liquidity, hybrids complexity and sector concentration risk. For more information on risks and other features of HBRD, please see the Product Disclosure Statement. Past performance is not indicative of future performance.

Note: Hybrids are relatively complex securities that combine elements of debt and equity securities.  Further details on the features and risks associated with HBRD are available here.