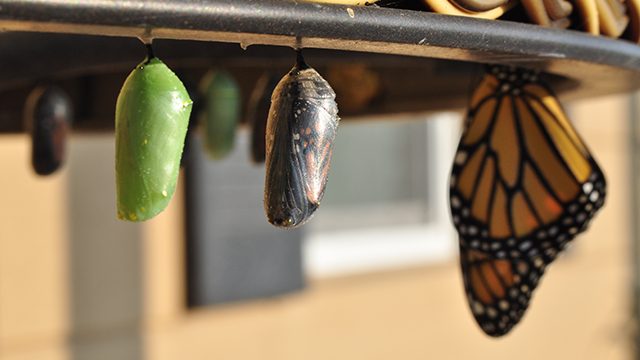 The strong relative performance of growth stocks in recent years has given rise to concerns about overvaluation and a potential re-run of the dotcom bubble twenty years ago. This note provides an update on the valuation picture with regard to growth stocks – as proxied by the NASDAQ-100.

As seen in the first panel of the chart set below, the NASDAQ-100 Index (tracked by the currency-hedged and unhedged HNDQ and NDQ ETFs respectively) has performed very strongly in recent years. Looked at from a return perspective alone, this strong relative performance is akin to that seen during the ‘dotcom bubble’ twenty years ago.

This time around, however, this solid performance has been well supported by underlying fundamentals, namely strong relative growth in earnings. At least up until recently the NASDAQ-100’s price to forward earnings (PE) ratio had moved broadly sideways and averaged just under 20 (panel 2). Since the COVID crisis, however, prices have increased relative to earnings such that the PE ratio has increased – reaching an end-month peak of 30 at end-August 2020. As at end-July 2021, it was trading at a forward PE ratio of 27.2.

Is this expensive? The PE ratio remains well below peaks reached during the dotcom bubble – so comparisons to that period at this stage remain way off the mark. Since the mid-1980s, the PE ratio has averaged around 25 – though excluding the bubble years from 1997 to 2004 the average has been only 21.

So in that regard the PE ratio today is 30% above its long-run average excluding the bubble years. 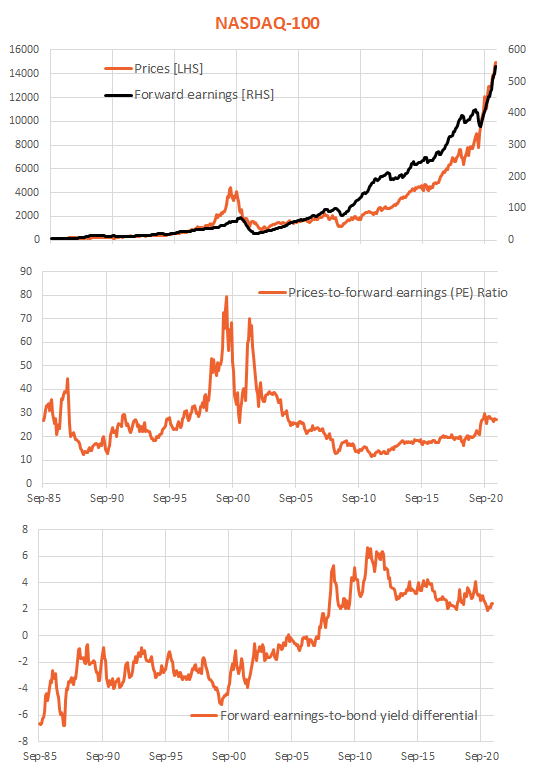 Source: Bloomberg, Refintiv, BetaShares. Past performance is not indicative of future performance of any index or ETF. Index performance does not take into account ETF fees and costs. You cannot invest directly in an index.

Of course, PE ratios in many markets are elevated these days – helped by very low interest rates, and to an extent, an expectation of a continued strong rebound in corporate earnings following their slump last year. As evident in the lower panel of the chart set above, the NASDAQ-100’s forward earnings yield-to-US 10-year bond yield differential is around 2.4% – which is admittedly at the low end of its range since the global financial crisis, but well up on its long-run average levels.

Another way to consider this is via the chart set below. The NASDAQ-100 has typically traded at a forward PE premium to the global market – averaging 44% since the mid-1980s (excluding the bubble years of 1997 to 2004). As at end-July 2021, it was trading at a premium of 49%. What’s more, even this modestly above average NASDAQ-100 premium to global markets could be partly justified by the trend lower in interest rates over recent years – which should tend to especially favour growth companies with strong long-run future earnings potential. 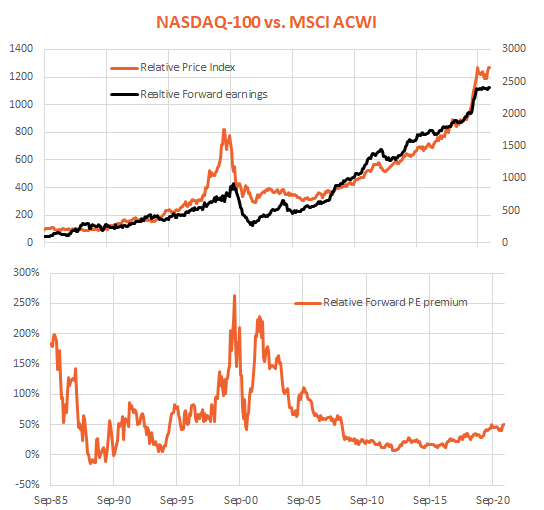 Source: Bloomberg, Refintiv, BetaShares. Past performance is not indicative of future performance of any index or ETF. Index performance does not take into account ETF fees and costs. You cannot invest directly in an index.

All up, so far at least it’s hard to argue growth stocks – as proxied by the NASDAQ-100 Index – are clearly over-valued, given the current still low level of interest rates and relative to similarly above-average global equity PE valuations more broadly. As it stands, moreover, current consensus estimates suggest forward earnings for the NASDAQ-100 Index will lift 14% between now and end-2022, which remains a bit more than the 11% growth expectation for global stocks overall.

For those interested in investing in the NASDAQ-100 Index of companies, easy access is available on the ASX through the currency-hedged and unhedged HNDQ and NDQ ETFs respectively.