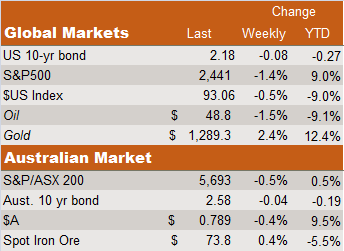 After a promising start to the week – reflecting easing tensions over North Korea – global equities ended the week down due to renewed concerns over US President Donald Trump.

The goods news last week was that North Korea appears to have blinked – at least momentarily – by delaying plans to fire a missile toward Guam. The bad news was that President Trump could not manage to unambiguously criticise Neo-Nazis in the wake of the Charlottesville tragedy. This pushed many high profile CEO’s to resign from his business councils, leaving the President little choice other than to disband them. Even more jarring for markets, however, was a rumour that Trump’s National Economic Council Director, ex Goldman Sachs banker Gary Cohn, would resign – later denied by the White House. Instead, it was divisive political adviser Steve Bannon who was shown the door on Friday!

In more equity supportive news, however, US retail sales in July were solid and minutes from the latest Fed meeting suggested more members were questioning the need to lift rates again this year, especially if inflation fails to rebound sometime soon. In this regard, we’ll learn more of the Fed’s intentions when Janet Yellen gives a key address at the Jackson Hole gathering of global central banker’s next Friday.

A key issue Yellen is grappling with is whether low inflation is sufficient reason to leave interest rates on hold, or should “financial stability” concerns – the risk of asset price bubbles if rates remain low despite good economic growth – require the Fed to keep with its rate hike time table. I’d prefer the latter view, but we’ll see. Adding to the pressure, President Trump has yet to indicate who’ll be the next Fed chairperson when Yellen’s current contract ends early next year – maybe, just maybe, Gary Cohn has extracted a price for not resigning!

Of course, the European Central Bank faces the same dilemma as the Fed given Euro-zone growth is OK yet inflation lower than desired. Indeed, the minutes from the ECB’s latest meeting released last week suggested it was increasingly worried over the Euro’s strength. It’s so concerned that media reports now suggest Mario Draghi will be a lot more dovish than he intended to be when he himself addresses Jackson Hole on Friday – and will delay providing any further signals over when a tapering of bond purchases might begin.

In Japan, last week’s Q2 GDP result was stronger than expected and showed the economy continues to enjoy robust growth. Despite this, the Bank of Japan remains committed to its massive quantitative easing program due to stubbornly low inflation. There’s a smattering of key economic data in the US next week, including the PMI manufacturing and non-manufacturing surveys, new home sales and durable goods. Other than that, the main focus will remain North Korea, Trump and Jackson Hole.

Economic news was mixed at home last week, with another solid employment report countered by persistent weakness in wage growth and patchy corporate earnings results. Most particularly, Telstra’s long-feared – and seemingly inevitable – decision to slash its dividend still managed to upset local investors when it was announced.

Even China’s key retail sales and industrial production data released last week were a little softer than market expectations – though still consistent with only a modest deceleration in growth over H2’17 after a strong first half of the year. Minutes from the RBA’s August meeting were as expected, consistent with rates on hold for the next three to six months at least.

In what will be a week bereft of key local data, attention is likely to remain focused on the ongoing reporting season and the multitude of issues facing global markets.