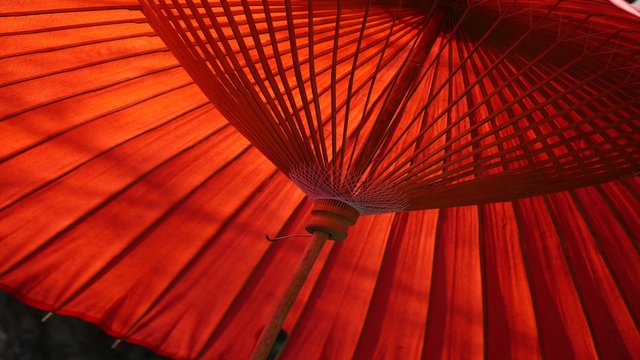 The weakness of the Japanese Yen in recent weeks following the Trump-led strength in the US dollar has once again thrown the spotlight on the performance potential of Japanese equities. Indeed, it may come as a surprise to some investors that, despite the relative weakness of the Japanese economy in the past decade or so, equity returns have held up reasonably well. What’s more, history shows that in those periods when Japanese equities tend to outperform it is usually when the Yen is weak. Should the Yen continue to weaken in 2017, therefore, it suggests Japanese equities may do relatively well – particularly on a currency-hedged basis.

Ironically, Trump could be a victory for Japanese exporters

As seen in the chart below, the Japanese Yen versus the US dollar has had pronounced cyclical swings in recent years. Most recently, the Yen began to appreciate earlier this year when global financial market instability caused the US Federal Reserve to back away from anticipated rate hikes. But the Yen has sunk against the greenback since the election of Donald Trump as US President, as this has bolstered hopes of stronger fiscal-led US economic growth next year and higher US interest rates – which in turn have strengthened the US dollar.  Indeed, the market now thinks a Fed rate hike next month is a virtual certainty.

Yen down Nikkei up

As seen in the chart below, despite Japan’s relatively weak economic growth in recent decades, the benchmark Nikkei-225 has held up relatively well compared to global peers.  Indeed from 31 January 2003 to 28 November 2016, the World Developed Country MSCI Equity index produced annualised total returns of 8.4% in local currency terms, only just ahead of the 7.6% annualised total returns for Japan’s Nikkei-225 Index. 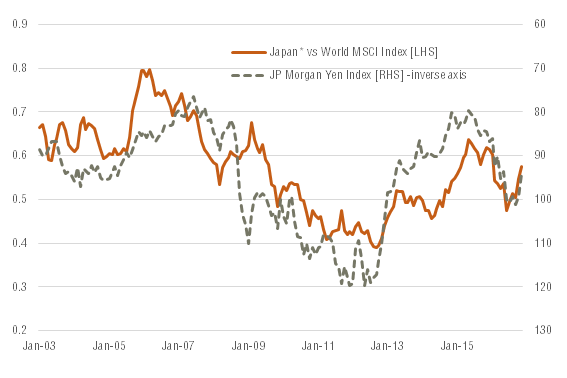 Source:Bloomberg. Past performance is not an indicator of future performance.

What’s more, Japanese equities have tended to enjoy their periods of out performance when the Yen has been weakening – such as between mid-2005 to early 2006, and on a more sustained basis from late-2012 to mid-2015.   The renewed weakness in the Yen over recent months has again been associated with Japanese equity out performance.  This inverse correlation between the Yen and relative equity performance appears to reflect the boost to international competitiveness that a weaker Yen provides to Japanese exporters.

To the extent the Yen continues to weaken over 2017, therefore, it suggests potential for continued (currency-hedged) Japanese equity out performance.

Looking at the Japanese equity market in more detail, it’s apparent that forward earnings growth in recent years has been fairly strong – so much so that the price-to-earnings ratio has in fact eased back in recent years and remains close to long-run average levels.  As we have previously discussed, improved corporate governance – by which Japanese companies are focused on improving returns on equity – appears to be behind Japan’s recent robust earnings performance relative to overall GDP growth.

By late-November, the Nikkei’s price to forward earnings ratio – using Bloomberg consensus earnings estimates – was 16, compared with an average of 16.7 since the start of 2003.  Other measures – such as price-to-book value – suggest even greater relative value. 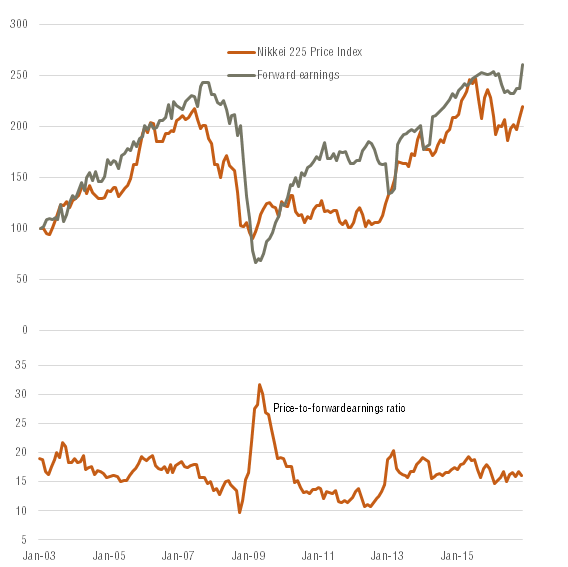 As should be apparent, it would seem advantageous for investors seeking to gain exposure to the potential for Japanese equity outperformance at a time of Yen weakness to do so on a currency-hedged basis.  In that regard, the BetaShares WisdomTree Japan ETF – Currency Hedged provides investors with diversified exposure to globally competitive Japanese companies listed on the Japanese equity market, hedged into Australian dollars by BetaShares.  It trades on the ASX using the ticker HJPN.

As an Australian domiciled fund, moreover, investors do not need to fill out W8 BEN forms, or risk any potential U.S. estate tax issues.