The combination of rising COVID-19 cases and restrictive government policy responses in the United States were the main global market focus last week, and which understandably pushed equity markets lower.  California and New York are now in effective lock down, meaning citizens are ordered to stay in their homes unless  seeking food or medical attention. Against this backdrop, US fiscal and monetary policies – which have been extensive – are hardly relevant.

In short, this drawn out horror movie – the opening scenes of which first began in Wuhan, China – with tension building as Europe got affected – is now at least perhaps reaching its climax in that the ultimate draconian policy – lock down – has finally arrived in the world’s most important economy.   If there’s any upside here, it’s that in terms of policy responses and countries affected, it can’t get much worse.

The key now is when such draconian policies succeed in “flattening the curve” outside of Asia, given that countries such as China, Korea and Singapore have already had good success in this regard.   Given it moved earlier than most, a leading indicator might be Italy.  Once there are signs that (albeit imperfect) lock down policies are working, markets may well be able to stabilise – and might even be able to look through the shockingly bad economic data we all know is coming.

Indeed, it will be interesting to see how the US market reacts to what should be horrible service and manufacturing PMI indices on Wednesday, and weekly jobless claims on Thursday.   Chances are that the data will  be a lot worse than the consensus economist expectation (as often happens during extreme events) – with Goldman Sachs no less suggesting jobless claims could surge from 280k last week to 2 million.  If the market fails to slump on this news, it could be a sign that a deep and dire recession could be closed to priced.

As is the case globally, more fiscal and monetary stimulus was announced last week, but it no longer really seems to matter.   What does matter is that, as in the US, we’re entering the climactic stage of this saga with sharply rising infection rates and draconian policy responses.  NSW and Victoria are edging closer to full lock down, and the Federal Government announced last night all pubs, clubs, restaurants and other venues that allow large groups to meet must close.

Sadly, we like other western economies, simply failed to contain this virus at our borders through stringent entry controls, extensive testing and case tracking.  There appears no light at the end of the tunnel until we appear able to get on top of the problem one way or another.  Thankfully at least, there’s little local economic data to focus on this week – not that it would be all that relevant anyway. 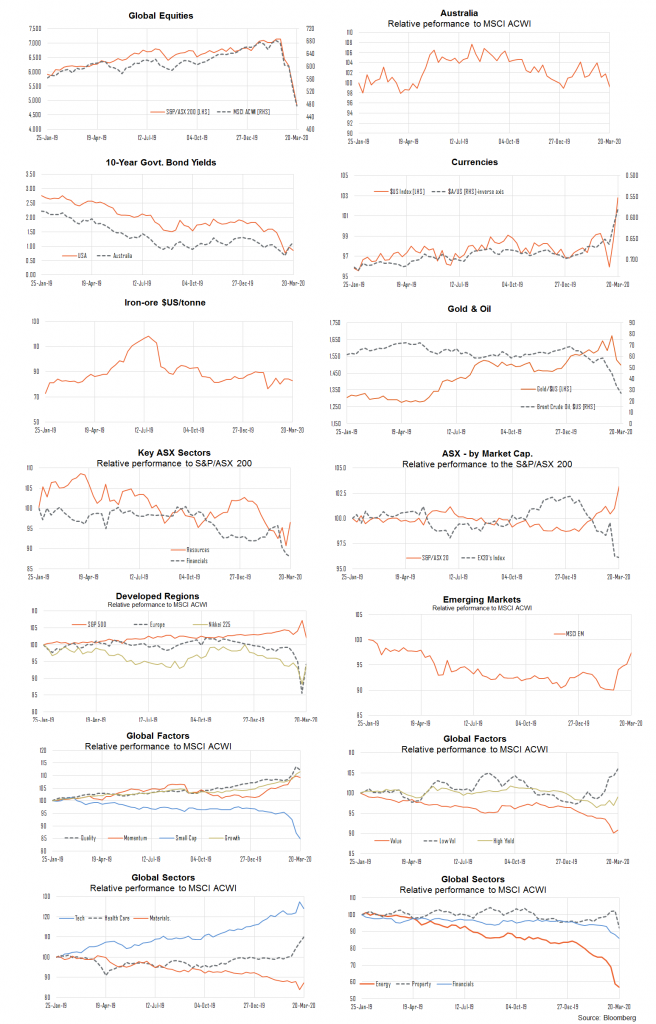