Today’s lower than expected wage price index result only highlights the challenges facing the Reserve Bank in attempting to get wage inflation up to the 3 to 4% p.a. levels considered consistent with it’s 2 to 3% inflation target.  As it stands, annual growth in the wage price index was only 1.7% in the June quarter, below market expectations for a 1.9% gain.

As evident in the chart below, annual wage growth remains well below 2% even though the unemployment rate has dropped to around 5%.   There has been a notable vertical decline in Australia’s Phillip’s Curve*” in recent years, such that given levels of unemployment tend to be associated with lower and lower levels of nominal wage growth.  This could reflect both reduced inflation expectations, with wage earners reducing the level of nominal wage growth desired to meet their real or after inflation wage growth objectives.  It could also reflect a more competitive and flexible labour market, due to greater use of global workers when local skills shortages emerge.

Either way, the good news is that the change in the Phillips Curve implies we may be able to support a much lower level of unemployment – potentially 3 to 3.5% – while remaining consistent with the RBA’s inflation target over the medium term.  In turn, this implies the RBA can allow the economy to “run hot”, if possible, for as long as necessary to achieve a decent decline in unemployment and a decent lift in wage growth. The challenge is know whether lower interest rates per se will be enough to achieve these unemployment and wage objectives and whether sustained low interest rates risk creating housing and equity prices bubbles in the meantime. 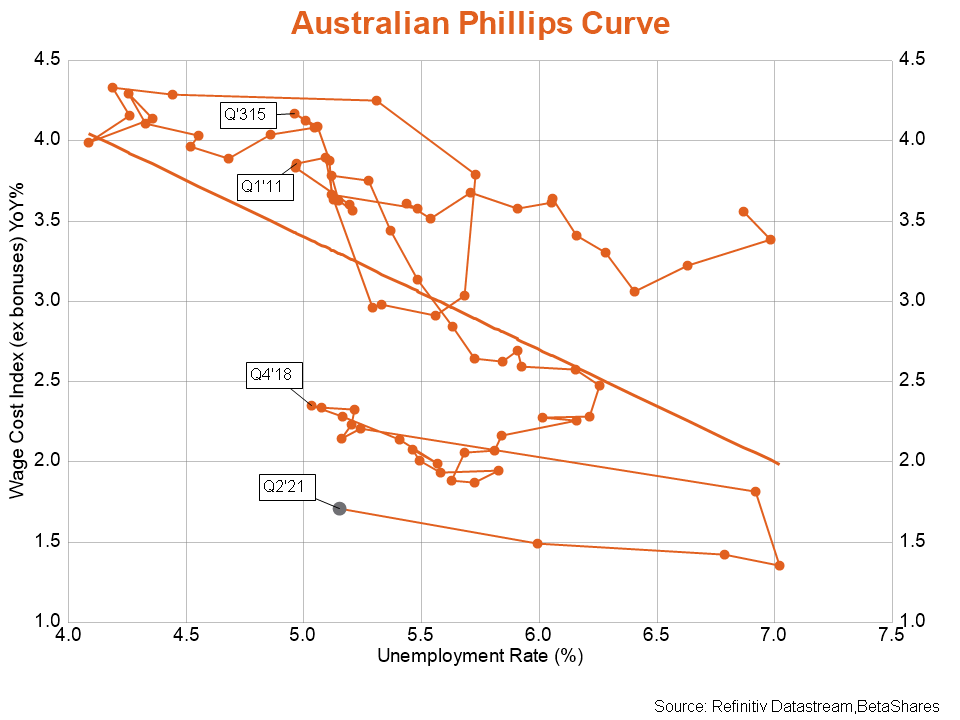 Either way, along with the now increasing likelihood of intermittent State lockdowns for several more months – at least until vaccination rates have lifted materially higher – today’s low wage number will make it very hard for the RBA to proceed with its planned reduction in bond purchases at the September policy meeting.  In the least, the RBA will likely maintain bond buying at its current rate and may well boost bond buying to a degree – if only to be “seen to be doing something” to support the economy during this new challenging period.

*The Phillips Curve is the relationship between unemployment and wage growth over time.  Generally speaking, lower unemployment tends to be associated with higher wage growth due to enhanced worker bargaining power and vice versa.