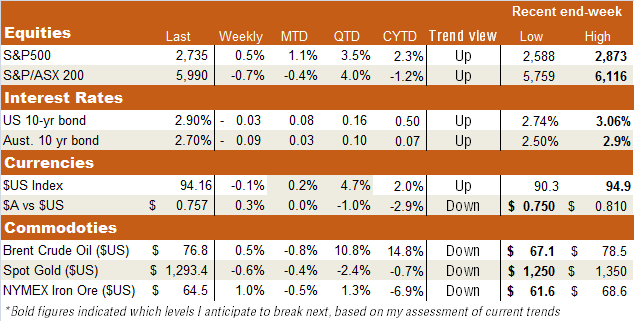 It was a mixed week for markets last week. Fears surrounding Italy and US President Trump’s trade policies weighed on sentiment, while continued “Goldilocks” US economic data and “on again” Korea talks helped support equities by week’s end. All up, the S&P 500 managed to finish the week up 0.5%, thanks to a solid 1% gain on Friday, which should be reflected in a solid open for the S&P/ASX 200 Index this morning. Benign US inflation reports helped contain the $US and bond yields last week, while oil rebounded due to some uncertainty as to when and how much OPEC/Russia would lift production in the months ahead.

Concerns over Italy came and went. An 11th hour political compromise avoided the need for Italy to go back to the polls, which markets feared (excessively in my view) might constitute a de-facto referendum on EU membership. Although Italy likely still faces a world of pain – and much squabbling with its European partners – global markets should soon shrug and ignore it again, provided an EU break-up remains only a distant low probability risk.

Adding to the angst last week was US President Trump’s decision to finally impose tariffs on steel and aluminium from Mexico, Canada and Europe – which quickly led to retaliatory measures.  How this plays out remains to be seen, but I still suspect these will be only temporary measures – without much further tit-for-tat escalation – as all sides search for a face-saving deal. Meanwhile, the best global news last week were continued solid growth and benign inflation reports from the United States. April consumer spending was strong, as were the gains in payrolls during May. But most critically, both US core consumer prices and average hourly earnings remained benign, with annual growth rates of 1.8% and 2.7% respectively.

Locally, the economic news was on the soft side. Home building approvals edged lower as did Sydney property prices, while the latest Private Capital Expenditure survey suggest non-mining business investment (at least at this early stage) does not seem likely to grow all that much in the upcoming financial year. Along with signs of slowing employment growth, the RBA’s upbeat economic outlook is starting to strain credibility.

It should be a relatively quieter week on the global data front, with the (likely strong) US non-manufacturing ISM Index a highlight on Tuesday. Otherwise, further fallout with regard to Italy – and particularly Trump’s trade wars – will most likely dominate market sentiment. All that said, fundamentally the macro back-drop remains positive for global equities – with good growth and earnings, and contained inflation and bond yields.

In Australia, the RBA will likely repeat familiar themes when it meets on Tuesday, with more focus potentially on Wednesday’s Q1 GDP report. Helped by a rebound in mining exports after recent supply disruptions, the national accounts are likely to show stronger growth in Q1 (around 0.7%) after a pedestrian gain of 0.4% gain in the December quarter. Public investment, housing and business investment will also contribute to growth, while consumer spending seems to have cooled again after some promise displayed last quarter. All up though, annual GDP growth should remain sub-3%.

P.S. Attentive readers will have noticed a change to my regular table above. To provide some structure to the weekly Bite, I now include key recent end-week highs and lows for the major markets I track on a weekly basis – along with my expectation of which of these levels is likely to break next based on my assessment of underlying trends. For example, as my working hypothesis is that equity markets remains in an uptrend, my expectation would be that recent market highs will be tested next rather than new lows made in the current correction phase. In summary, I’m bullish equities and the $US and bearish commodities, bonds and the $A.