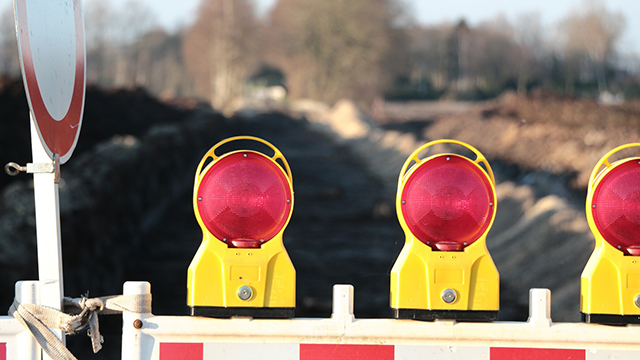 An element of optimism appears to have crept back into the Australian economic outlook over the past month or so, culminating in the Reserve Bank’s latest above-consensus forecast of above-trend economic growth in 2017.  But as this note points out, the economy still appears to face at least three critical downside risks in the coming year, suggesting the RBA may be overly optimistic.

Some signs of optimism

As has been evident across the globe since the election of Donald Trump to the US Presidency last November, there have been some signs of optimism with regard to the Australian economy of late. The National Australia Bank Business Survey, for example, revealed a strong lift in its business conditions index during January. Iron ore prices have remained high, and the national accounts suggest the economy rebounded in the December quarter, posting solid 1.1% growth, after a 0.5% decline in national output for the September quarter.  All up, the economy grew by 2.4% through 2016, which was enough to keep the unemployment rate broadly steady at just under 6%.

In its February Statement of Monetary Policy (SMP), moreover, the RBA expressed such optimism, forecasting economic growth of between 2.5% to 3.5% through 2017 – or a mid-point forecast of 3%.  Associated with this forecast, the RBA expected the unemployment rate to “edge lower over the forecast period.”  The RBA’s optimism is based on several factors including a slowing in the rate of decline in mining investment; a lift in resource exports (especially LNG Gas volumes); and continued reasonable growth in consumer spending.

That said, there are at least three potential downside risks that counter this optimism in my view:

According to the RBA’s latest SMP, “the large pipeline of work yet to be done, particularly in apartment building, is still expected to support further growth in dwelling investment over 2017.”  The RBA has noted that because much of the current building upturn is in high-rise apartments – which take longer to build than detached homes once approvals have been granted – there is a larger than usual stock of home building work still outstanding, as a share of GDP.

As seen in the chart below, however, despite the reliance on slower to build high-rise apartments, the relationship between the real value of building approvals and new dwelling investment (as a % of GDP) has not altered all that much so far this cycle. What’s more, the real value of approvals dropped by a relatively sharp 20% in the December quarter, suggesting that new dwelling activity should also decline somewhat in the March quarter. 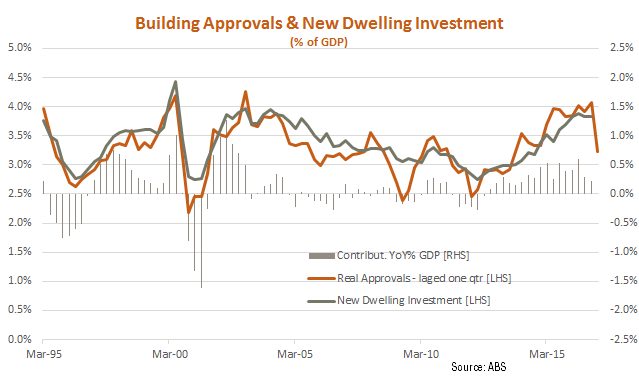 Indeed, although bad weather was partly blamed for the 1.6% decline in new dwelling construction in the September quarter, activity only bounced back by a modest 0.7% in the December quarter – to still be below the level of activity in the June quarter.  All up, the “pipeline of work” argument does not appear sufficient to stop the contribution to growth from new home building activity reversing this year.

Yet this view seems hard to reconcile with the first glimpse of 2017-18 mining investment intentions, contained in the December quarter Capital Expenditure Survey by the Australia Bureau of Statistics.  Applying historic realisation ratios between planned and actual investment, the survey continues to suggest mining investment will decline by 25-30% this financial year (in year-average terms), which is broadly consistent with a flattening out in quarterly mining investment over H1’17 at December quarter levels.  But the first glimpse of investment intentions for 2017-18 implies a further 20 to 30% fall in investment (in year-average terms), which would require further sizeable declines in investment over the coming quarters. 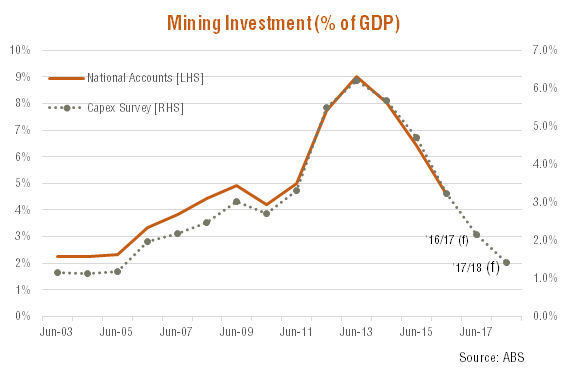 Risk #3 Consumers have already run down their savings a lot

One of the upside surprises in the December quarter national accounts was a punchy 0.9% lift in consumer spending, despite another quarterly decline in real disposable income. Indeed, consumer spending grew 2.6% over 2017, or a full one percentage point faster than real incomes – leading to the household saving rate declining from 6.2% to 5.2% of disposable income.  As seen in the chart below, the saving rate has now declined to the lowest level since the late 1990s – just before the debt-fuelled boom in house prices – and even the RBA concedes it is unlikely to fall much further from here. 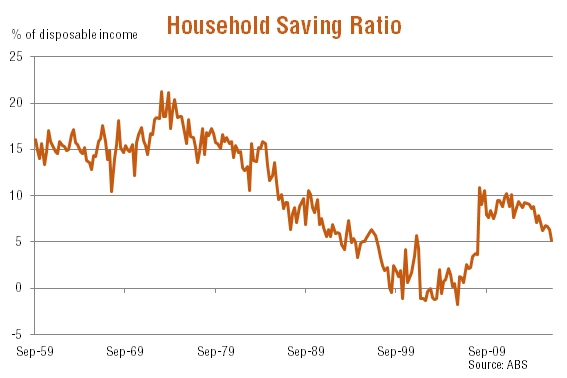 If the household savings rate stops falling, consumer spending growth will move more in line with income growth, which has been notably weaker of late due to weak real wage growth and only modest growth in total hours worked across the economy.  Given consumer spending accounts for around 55% of GDP, even a modest slowdown would have a notable effect on overall economic growth.

Although commodity prices have rebounded and some survey measures of business conditions are at above-average levels, the downside risks to growth presented here suggest the economy may struggle to reach the 3% growth rate expected by the RBA over 2017.

Assuming growth disappoints, it is very hard to envisage a rate hike by the RBA this year, and the bias on rates still appears to the downside.   It also suggests that the local equity market could under perform other markets such as the United States (and even Japan and Europe), and the $A could come under some downward pressure.

Those seeking international equity exposures to diversify away from the local market might consider QUS and NDQ for the US market, and HJPN and HEUR for the Japanese and European market respectively. Investors who are seeking to hedge against potential downturns in our Australian market (or profit from any potential declines) may wish to consider the BetaShares Australian Equities Bear Hedge Fund (ASX Code: BEAR) or the BetaShares Australian Equity Strong Bear Hedge Fund (ASX Code: BBOZ).