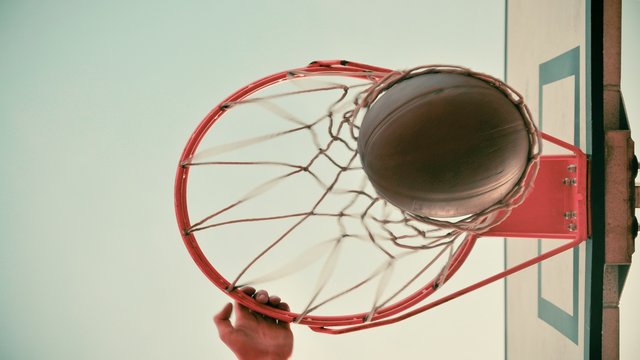 Donald Trump’s US Presidential election victory has led to widespread re-pricing of asset prices across the globe, as evident from a rising U.S. dollar, rising bond yields and higher equity prices. Within the US equity market specifically, moreover, there has also been notable sector rotation toward better valued financial and energy stocks, and away from health care and technology stocks – which in turn has again demonstrated the benefits of a patient “fundamental indexing” investment strategy, which has recorded a figurative ‘slam dunk’ vs. comparable market-cap benchmarks in recent months.

Fundamental Indexation over US shares

In the past I’ve written about the virtues of fundamental indexation over Australian shares – see here. While the Australian story has been something we’ve been focusing on for some time here at BetaShares, recent performance of the same strategy when applied to US shares serves to illustrate that such a strategy can be powerful independent of location.

BetaShares FTSE RAFI U.S. 1000 ETF (ASX: QUS) provides exposure to a diversified portfolio of US equities, weighted in a way that is reflective of the economic size (as reflected in sales, earnings, book value and dividends) rather than the market capitalisation of its constituents.  As we have previously explained here, here and here, fundamental indexing has historically been able to deliver strong performance relative to the more traditional and better known market-cap weighting strategies over time – because the former, relative to the latter, tends to underweight overvalued stocks and overweight undervalued stocks. More information on QUS is available here.

Heading into the US Presidential election, for example, as the below table indicates, the FTSE RAFI US 1000 Index that QUS aims to track was – relative to the market-cap weighted S&P 500 Index – overweight energy and financial stocks, and underweight technology and health care stocks.  With Trump’s victory, there has been a rotation toward these former sectors and thus solid outperformance by the Index that QUS aims to track relative to the market capitalisation weighted benchmark.

Why? Financials have benefited from a lift in bond yields (the reasons for which we explained here) and the prospect of reduced financial sector regulation under President Trump.  The energy sector has also benefited from Trump’s support for local energy development and firmer oil prices associated with OPEC’s eventual agreement to cut production.

As seen in the table below, these relative sector exposures were also reflective of relative stock exposures  – with the Index that QUS aims to track overweight energy and financial companies like Chevron, Exxon Mobil, Citigroup and Bank of America – while being underweight tech stocks like Apple and FaceBook.  Note, moreover, that the differences in individual stock weights were only quite modest at the margin relative to that of the S&P 500 Index – as is typically the case.

Despite these marginal differences, however, the Index that QUS aims to track has generated solid outperformance in recent months, as outlined in the table below. 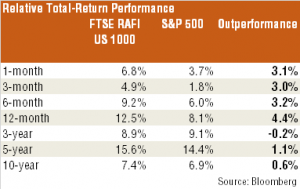 As seen in the charts below, this outperformance is also consistent with the Index’s relative out performance over time. As evident, the Index that QUS aims to track does not always outperform the S&P 500 Index (or market-cap indices more generally), as even overvalued stocks can continue to rally and cheap stocks sold down further for extended periods. But these periods of underperformance have historically been more than offset by periods of strong outperformance. 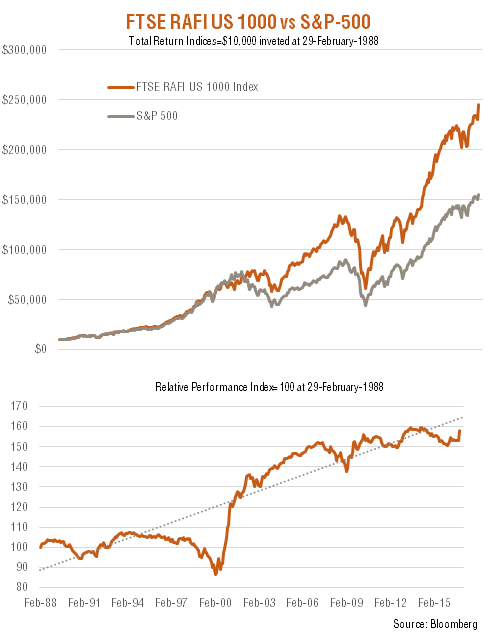 Above graphs and table show performance of FTSE RAFI U.S. 1000 index, not ETF performance and do not take into account ETF management costs. You cannot invest directly in an index. Past performance is not an indicator of future performance of index or ETF. The FTSE RAFI U.S. 1000 Index was launched on 29/12/2005. Index returns prior to launch are simulated based on Research Affiliates’ patented non-capitalisation weighted indexing system, method and computer program product. Actual investment results may differ from simulated results.