On the trade front, China’s decision to cancel a planned trip to US farms plus Trump’s declaration he wants a “complete deal not a partial deal” unnerved markets, which have been buoyed by encouraging signs of progress in recent weeks.  Data out of China remained soft, with a further slowing in retail sales and industrial production growth – which might seemingly make China more willing to strike a trade deal and/or contemplate yet another round of policy stimulus.

The Fed, meanwhile, did cut rates by 0.25% as widely expected but the “dot plot” suggested on balance it does not expect to cut rates again over the coming year – contrary to market expectations.   Of course, there’s more than usual disagreement among the Fed members, with two voting against last week’s rate cut and one favouring a bigger 0.5% cut!   Fed voting members are also split on the outlook, with seven expecting one more cut this year, five actually anticipating a rate hike, and five expecting rates to be left on hold.  In Australia parlance nonetheless, the Fed can be considered to have retained an “easing bias” given Fed chair Powell re-iterated it would continue to “act as appropriate”.  My base case is that the Fed will ultimately cut rates once more this year.

In other news, oil prices gave back around half their initial 15% surge following the attacks in Saudi Arabia, after the latter claimed it can get production back to normal within weeks. As suggested last week, I can’t see a renewed oil price surge, but new uncertainties in the Middle East could mean prices stay a bit higher for longer than would otherwise be the case.

Also curious last week was a brief surge in US overnight inter-bank lending rates.  This has ultimately been blamed on what now appears an inadequate level of cash reserves that banks can draw from the Fed on days of larger than usual cash drains from the private sector (such as arising from a bunching of corporate tax payments or government bond purchases).  In turn, this likely means the Fed may have already gone too far in running down its balance sheet in recent years – which effectively drains bank reserves held at the Fed.  For every-day investors, however, what’s important is that this is likely a technical/plumbing issue in the bowels of the financial system that can and should be easily corrected – rather than a “canary in the coal mine” suggesting wider systemic risks to both markets and the economy.

Globally, apart from any hints regarding the trade talks, markets will be focused on any further evidence of a deterioration (or perhaps stabilisation) in global growth when Markit’s range of manufacturing indices are released overnight.    In recent months there has been some stabilisation in European manufacturing according to Markit, but gathering weakness in US manufacturing – which has been affected by the trade wars with a lag.

Along with the weakening manufacturing sector, US durable goods on Friday could reveal worrying ongoing softness in underlying business investment – which should make the US more willing to strike a trade deal (one would think!).  That said, US consumer data also out on Friday may show household spending remains firm while annual core consumer price inflation, at 1.8%, is only just below the Fed’s 2% target level.

A hawkish Fed and seemingly soft local employment report caused the $A to weaken last week, as expectations that the RBA could cut rates again as early as next month strengthened.  Although employment growth remained firm, solid growth in labour supply (reflecting strong underlying population growth and rising participation) meant the unemployment rate edged up further to 5.3%.  All up, that still means the labour market has ample spare capacity and so the RBA has further work to do.

While my base case has long been that the RBA would wait until November before cutting rates again, a move next month is entirely possible. If so, we’ll likely get a good hint in this regard when RBA Governor Lowe speaks again tomorrow. 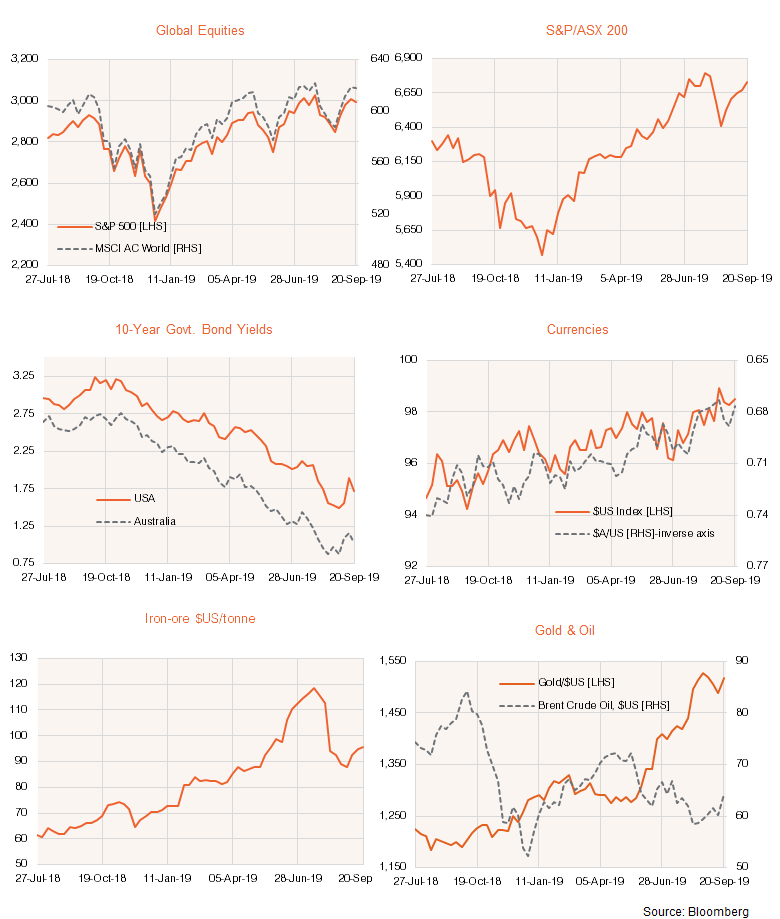