Not much has been able to roil the US stockmarket of late, but last week’s negative print on the front month WTI oil futures contract finally did the trick. The S&P 500 dropped almost 5% over two days but then staged a feisty comeback to end the week down only 1.3% – helped by an equally admirable fight back in oil prices. US bonds and gold benefited from the risk-off shift.

Why did oil prices go negative? Because the U.S., in particular, is awash in oil, and those left holding the nearest-term futures contract at expiration – and therefore required to take delivery of physical oil – would face very expensive US storage costs. Until the supply glut is removed, that means there’s a risk the current nearest-term June contract price could also go negative as it approaches expiry. [By the way, to reduce this risk, the BetaShares OOO ETF – which ordinarily would have exposure to the nearest-term WTI futures contract, has shifted its exposure to the longer-dated September contract for the time being.]

Funnily enough, one of the factors that eventually supported oil prices last week – and indirectly Wall Street – was talk that U.S. shale oil producers would likely need to slash production (due to their high cost base), which would clearly be disastrous for U.S. business investment and economic growth. But such is Wall Street’s bullishly blinkered view of late, such subtleties were lost on the market.

The bigger picture, however, remains that global economic data (apart from a rebound in some lead Chinese indicators) has slumped to depression levels, but a peaking in CV-19 infection rates continues to raise hopes of an easing in social distancing restrictions. While the market likely remains overly optimistic over the speed with which restrictions can be lifted, and is yet to focus on the very real risk of a second wave of infections, hope continues to trump fear for now – helped along by the idea that the U.S. Federal Reserve will provide yet more stimulus if stocks slump.

The current Q1 U.S. earnings reporting season remains another market test, and earnings expectations (at least from those analysts prepared to make forecasts) continue to collapse. But helped by the lack of clear company guidance as to the future, we’ll see if markets retain their current ‘look through the weakness’ approach. Potentially helping are reports this week from the market’s strongest performers – tech titans such as Alphabet (Google), Facebook, Amazon, Apple and Microsoft. They’re likely to show fairly resilient performance for Q1 at least, though the question will be the extent to which they warn of – and the market listens to – downgraded earnings expectations for the year ahead.

Another highlight this week will be a Fed meeting, with a market focus on any hint of a slowing in the rate of bond purchases now that some order has returned to markets.

All up, after an amazing few weeks of strength, U.S. stocks are again testing another set of key technical resistance levels – whether they manage to break through these will be of great interest this week. I’m concerned that the S&P 500 is trading at 19.1 forward earnings – close to the level at the February peak – and earnings are likely to slump further in the months ahead (pushing valuations, at current price levels, to dotcom bubble territory). That said, the market is ignoring near-term weak data – and actual evidence of a likely disappointing economic recovery remains some time away. Interesting times!

It was bemusing to learn that local retail sales surged by 8% in March as panicked households chose to stock up on toilet paper, flour and other weird items last month. In less hilarious news, we learnt that around 3% of the workforce seemingly lost their jobs in the first two weeks of April, which is consistent with both RBA and Treasury warnings of a rise in the unemployment rate to around 10% by June.

As is the case globally, we’re now also debating how quickly social distancing restrictions can be removed, balanced by the fact that while we’ve been great at ‘flattening the curve’ we’re also heading into the dangerous winter period with ‘herd immunity’ still likely very low. While our market will continue to be driven by Wall Street sentiment, fear of dividend cuts is also emerging as a local concern. I hasten to add that our earnings outlook is even bleaker than that of the U.S., given we don’t enjoy the benefit of its tech titans – stay tuned for my Wednesday blog post on this!

In terms of data, consumer prices will remain subdued in Wednesday’s CPI report with credit growth on Thursday also likely to remain soft. 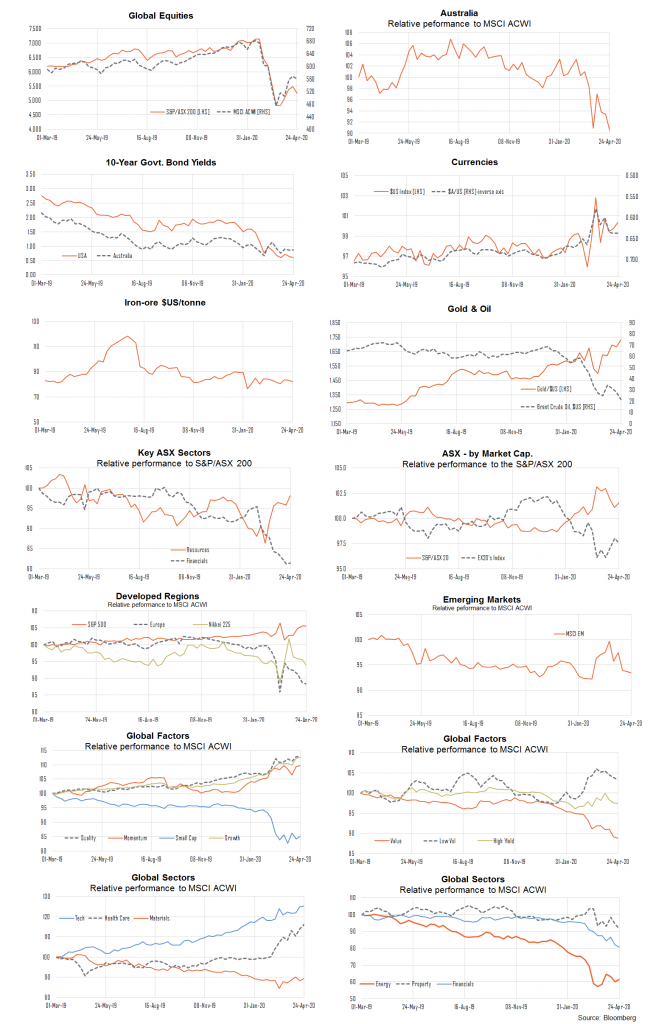