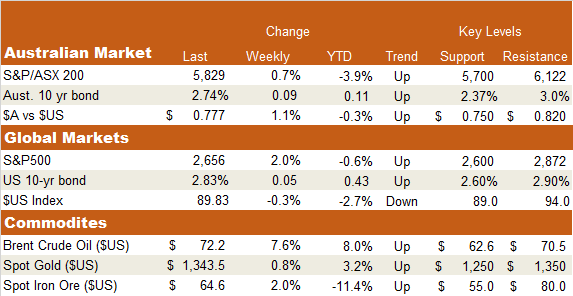 On balance it was a positive week for global markets with the highlight being a conciliatory speech on trade tensions from Chinese President Xi Jinping. Although Chinese media a day later played down talk that China was ready to bend to America’s trade concerns, it’s fair to say that overall trade tensions have eased somewhat over the past week – or at least they were overtaken with new market concerns regarding Syria and even the lingering Trump/Russia investigation.

Indeed, US markets retreated on Friday due to fears over a Syrian strike, which were duly realised over the weekend. But after much huffing and puffing, however, I doubt Iran and Russia will offer much in terms of retaliation, especially as the strikes appeared to carefully avoid any hit on Russian assets in the field. Meanwhile, the FBI’s raid on Trump’s personal lawyer suggests the “Russia investigation” will continue to simmer in the background.

In other news, oil prices continued their upward move, with Brent Crude piercing through the January high of $US70.5 – reflecting reports that Saudi Arabia is targeting an $US80 price to help its parlous budget position and maximise proceeds from the sale of State oil producer Aramco. Last week’s missile strike on Saudi Arabia (from Yemen) and the Syrian tensions only added to the upward price pressure. Fundamentally, however, it’s also increasingly clear OPEC’s production cut agreement – despite the expected US production response – has overall been successful in whittling down excess global supplies.

In regards to US inflation, US producers prices in March were a little higher than expected though the lift in the core-CPI annual rate from 1.8% to 2.1% – as low mobile phone prices last year dropped out of the calculations – was in line with expectations. Note the Fed actually targets the private consumption expenditure deflator (PCE) which has tended to average around 0.25% below the CPI rate over the past two decades. As at February the annual core-PCE was at 1.6%, though – based on the CPI – it seems likely to lift closer to 2% over coming months, thereby affirming the Fed’s intent to lift US interest rates. At this stage I still doubt the likely modest lift in US inflation will be enough to goad the Fed into raising rates more than twice further this year.

Locally, the key news was a fall back to earth in the National Australian Bank business conditions index in March from record high levels – likely reflecting global trade concerns.  That said, overall business sentiment is still at healthy above-average levels. Home lending edged up in February, however, perhaps reflecting softer property prices encouraging some buyers back into the  market.

Assuming global trade and Syrian tensions ease somewhat, an important focus for markets this week should be the US earnings reporting season. There seems little doubt that on average the earnings reports will be upbeat, the only question is to what extent this “good news” is already priced into the market or if geopolitical events will distract attention. Indeed, one possible new distraction are reports that US President Trump is considering sacking Deputy Attorney General Rod Rosenstein – which would cause the Russia probe concerns to flare up again.

More fundamentally, the Fed’s Beige Book is also released, which could provide further anecdotes on the extent of wage and prices pressures building (or not) through the economy. Also, US retail sales are expected to bounce back in March after unusual weakness so far in 2018 – if sales remain weak new doubts about US consumer spending could creep into market conversation.

In other markets, China’s industrial production, retail sales and Q1 GDP are released on Tuesday – and should show continued steady solid growth.