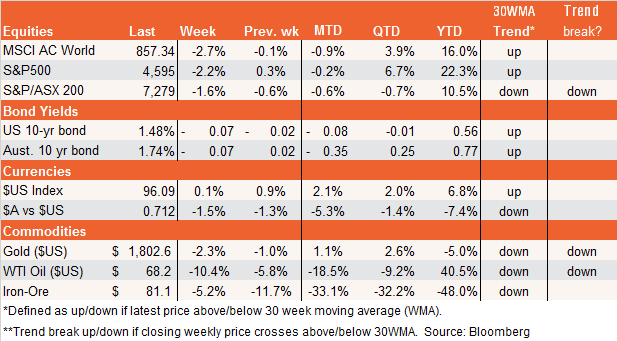 Global equities were coasting along for much of last week before being hit on Friday by concerns over a new Covid variant – Omicron. While new COVID variants emerge regularly in a Darwinian fight for survival, what jolted markets was the World Health Organisation’s (WHO) decision to label it yet another ‘variant of concern’ – due to its apparent speed of transmission so far and the unusually high number of mutations on its ‘spike protein’ – which raises the risk of it being more resilient to current vaccines. For the record, this is the fifth ‘variant of concern’ identified so far, following Delta, Alpha, Beta and Gamma.

Likely not helped by thin post-holiday (Thanksgiving) trading, U.S. stocks sank by just over 2% on Friday and U.S. 10-year bond yields dropped 15 basis points to 1.48%. The immediate upshot of Omicron is that the market’s previous fear – accelerated Fed monetary tightening – has been thrown out the window for the moment. Growth/technology stocks outperformed value.

Of course, what ultimately matters for markets is not new COVID variants per se, but whether a sufficient number of important countries (especially the U.S.) feel the need to re-impose growth-destroying mobility restrictions or lockdowns. And for this to happen, the new strain needs to be not only highly transmissible (which is likely the case), but also vaccine resistant (which is possible, though we can’t yet be sure) and – lastly and most critically – cause severe symptoms that could quickly overwhelm hospitals. We may learn more on the latter within days, but the history of viruses is that they usually get more transmissible but less severe over time – after all, keeping their host alive maximises their chances of surviving. Reuters over the weekend did quote one South African doctor who suggested he’d seen only mild symptoms so far.

Either way, given we know so much about Omicron, other experts have already suggested a new more effective vaccine could be created fairly quickly (although this still leaves the problem of testing and distribution).

So far, other variants of concern have not led to new lockdowns in the U.S. – though Germany did seem close to that in recent weeks due to the Delta variant (and Austria did go back into lockdown).

All up, while it’s still early days, my hunch is that Omicron won’t lead to new lockdowns – as while it may well be highly transmissible, it’s symptoms may prove to be not too severe. If my hunch is right, the current sell-off in equity markets represents a good buying opportunity. At the same time, the plummet in bond yields could represent a good opportunity to lighten exposure to bonds as we march towards inevitable Fed tightening as early as mid-2022.

Most other news this week will take a backseat to Omicron, though for what it’s worth we have U.S. payrolls on Friday and testimony by Fed chair Powell and Treasury Secretary Yellen through the week. Around another 500k new U.S. jobs were expected to have been created in November, with a key market focus being the extent of wage inflation and whether there’s been any further recovery in the stubbornly low participation rate. Much of what Powell and/or Yellen might have said on policy now matters a lot less until the severity of Omicron is clearer. 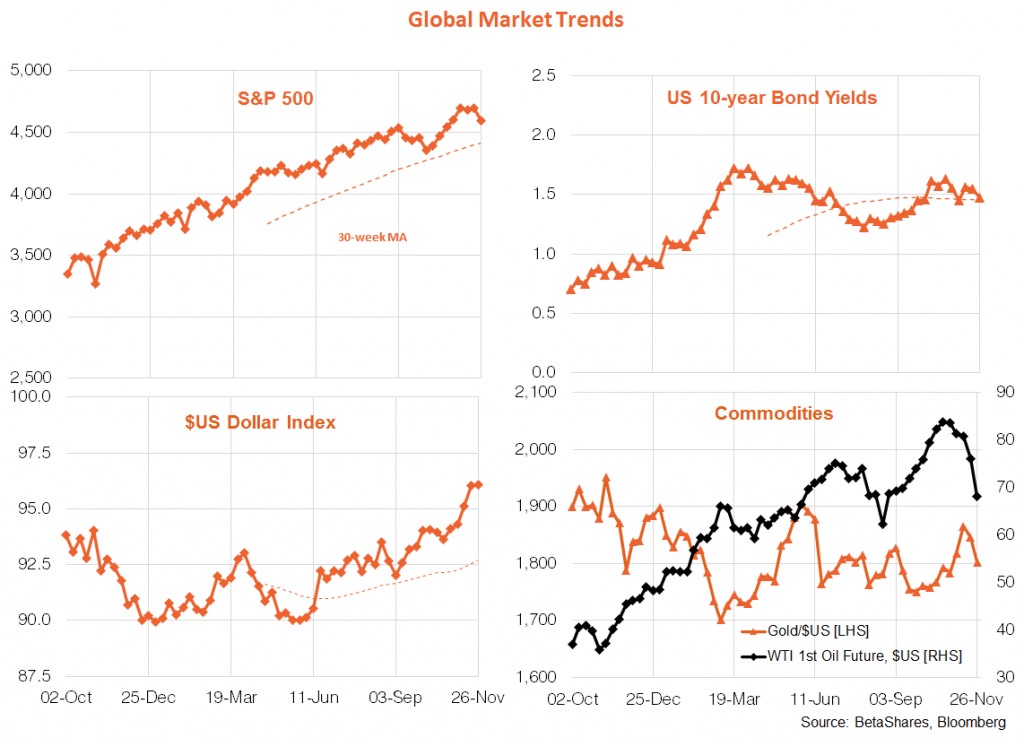 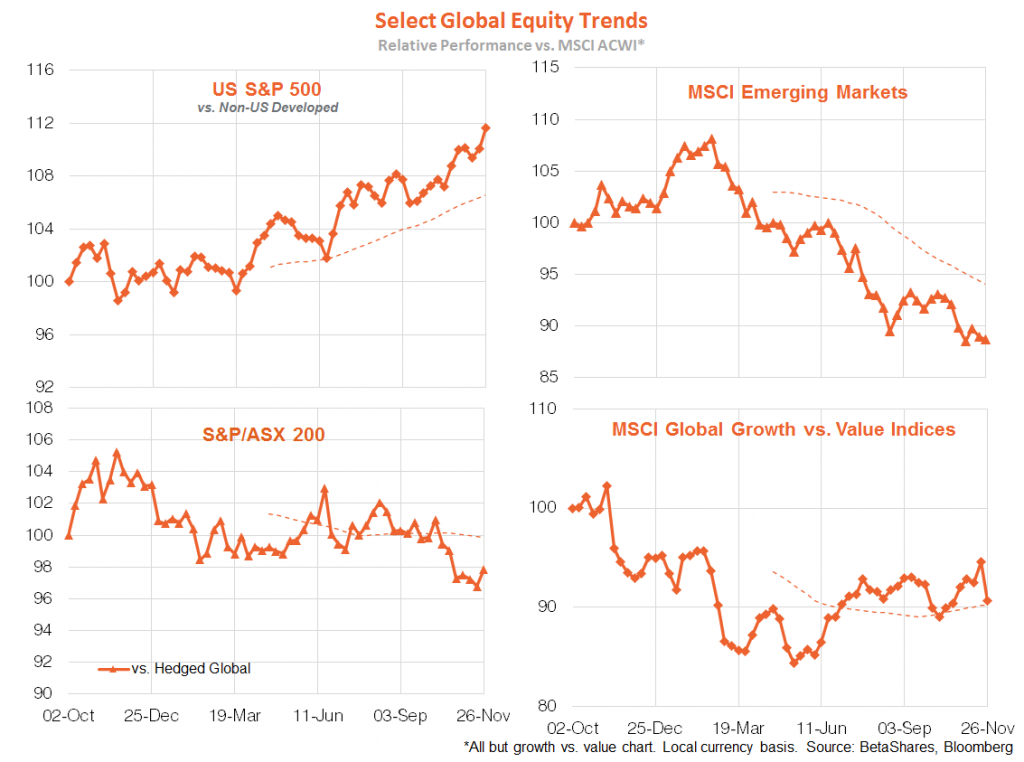 As might be expected, Australian stocks sank on Friday as Omicron news swept across Asian markets. Futures suggest the market will drop somewhat further today. The $A also sank closer to my latest target of US 70c.

In terms of local news this week, the highlight will be Wednesday’s GDP which is expected to show the economy contracted by around 2 to 3% in the September quarter due to the NSW/Victorian lockdowns. Although shocking at face value, this is now old news – with markets now more concerned about the speed of recovery, and whether Omicron might throw a spanner in the works.

Ultimately only one thing matters this week – Omicron. And this is a case where early information will be key – and we can expect the world’s leading and best-resourced hedge funds will be furiously trying to assess its severity as quickly as possible. In turn, that suggests markets will quickly sniff out how worried we need be. 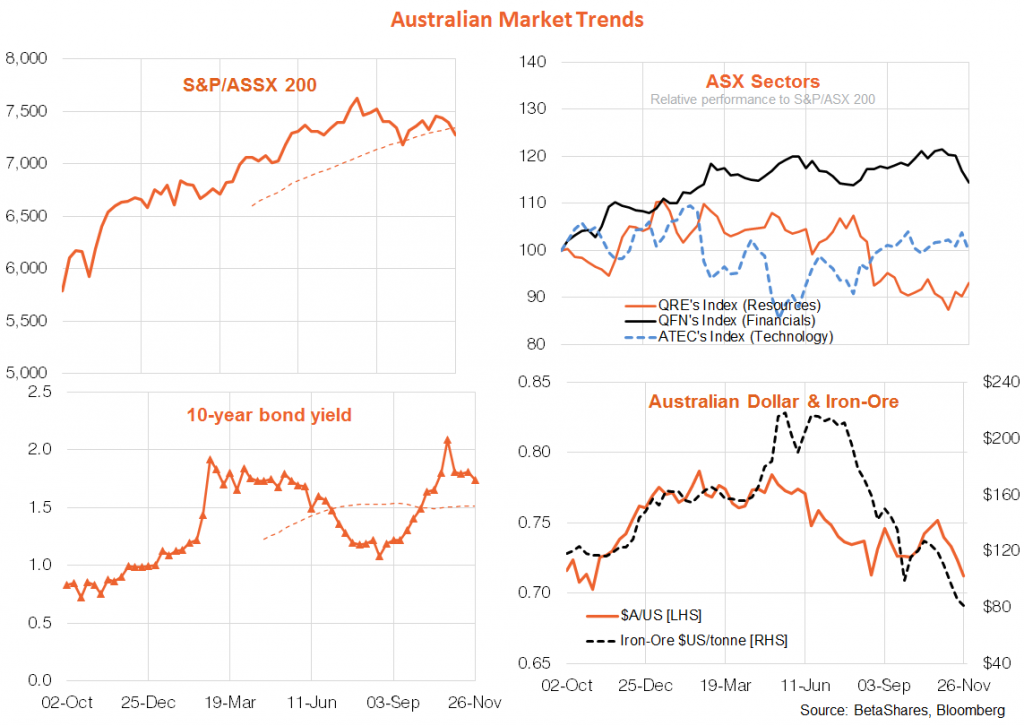