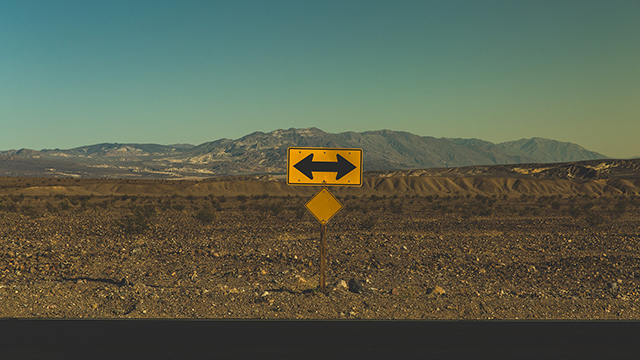 A claim currently receiving renewed attention in the long-contested active versus passive investment debate is that the apparent outperformance of passive investment strategies is largely cyclical, and usually only takes place in the late stages of a bull market.

This note, however, argues that while there may well be an element of cyclicality in passive versus active fund manager performance, this is minor in degree. What’s more, contrary to any claims made, these sporadic periods of active outperformance don’t appear to provide much downside risk protection in bear markets and, more importantly, indications are that any such outperformance does not offset the much longer periods of active manager underperformance during bull market phases.

Financial research across the world has long noted that active equity investment managers, on average, fail to beat passive broad market investment benchmarks over time. Yet a wrinkle on this general observation has emerged in recent times and is best represented in the (widely reproduced) graph below from a US-based active-investment manager, Baron Capital. Namely, this chart shows that active investment performance tends to be cyclical – and especially during the downmarket in the early 2000s and again during the 2008 financial crisis, active managers on average tended to outperform.

So far so good. At face value this result seems to make intuitive sense: during strong bull market periods, popular large-cap stocks with strong momentum may continue to perform well, even though an increasing number of active managers may feel they are overvalued and so may reduce exposure to them.  In such periods of strong momentum, therefore, passive indexing strategies which weight stocks according to their market capitalisation may tend to outperform more value-based active managers.  When the bear market strikes, however, and once popular stocks fall out of favour – active managers then come into their own. Right?

Against this background, a generous theory could be that the recent extended period of active manager underperformance can be explained by the fact we’ve enjoyed a particularly long and extended bull market since the financial crisis – i.e. the recent period of active manager underperformance is only cyclical, and will be corrected when the next bear market inevitably strikes. Sadly the numbers don’t quite bear this out…

Even in bear markets, active managers don’t tend to provide much downside risk protection – and they tend to underperform over whole market cycles

Even a cursory glance at the above chart should alert readers to one observation: the period of active manager outperformance (in green) tends to be milder and shorter than their periods of underperformance.

Indeed, also included in the research which produced the above chart was the analysis below – examining the degree of active manager outperformance in different stages of the past four US stock market cycles.  As evident, active managers tend to do best in bear market periods – with a majority of managers outperforming in each of the previous 4 bear periods.  Yet at least over the past three market cycles, this degree of outperformance was more than fully offset by substantial underperformance during the preceding longer bull market periods – such that active managers tended to underperform over the market cycle as a whole. 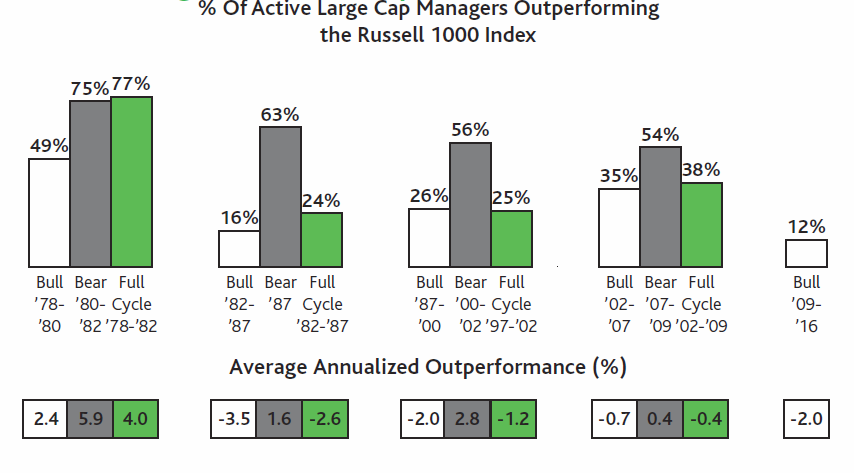 Not helping the active manager’s cause was the fact that the excess annualised return during the last three bear market periods appears, on average, to be quite modest – at not more than 3% p.a.  If an investor’s active manager is down 27% in a bear market, however, it’s not much solace to know their manager nonetheless outperformed the market’s 30% decline.

The above evidence suggests active managers, on average, don’t provide much downside risk protection in bear markets – even if they manage to marginally outperform the market’s usually steep decline.

Again, that should not be too surprising – given active equity managers tend to have mandates requiring them to be close to fully invested in the market, with only limited ability to increase cash exposure.  It’s also consistent with the difficulty most investors – professional or otherwise – have in timing market exposure.

There are better ways to “Index” and get downside protection!

One of the implied criticisms of passive investment in the above discussion is that it tends to performance chase – increasing the weight to strongly performing stocks which are rising in market capitalisation (irrespective of their underlying value) and reducing the weight to poorly performing stocks that might be better valued. That said, this is really a criticism of market-cap passive index weighting, rather than passive investing per se.

Indeed, as seen in the charts below, while active managers on average haven’t beaten the market-cap weighted S&P 500 Index over time,  an indexing strategy based on a company’s non-price measures of economic size has outperformed the S&P 500 Index over the past 10-years, and by consequence, the average performance of active managers.*  This “fundamentally-weighted” indexing strategy forms the basis of the BetaShares FTSE RAFI Australian 200 ETF (ASX Code: QOZ), and the BetaShares FTSE RAFI US 1000 ETF (ASX Code: QUS). 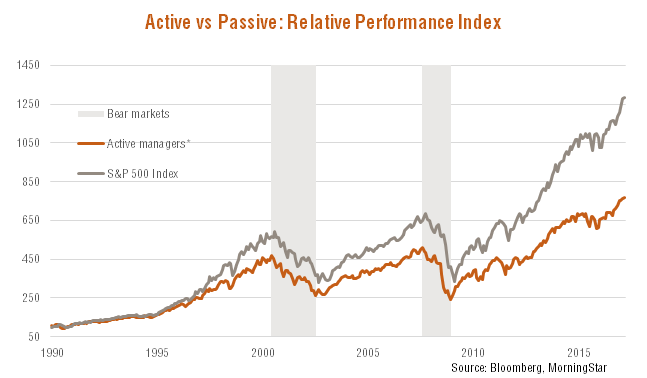 *Defined as the equally weighted monthly performance of the median growth, value and blended large-cap US active manager in the MorningStar database. 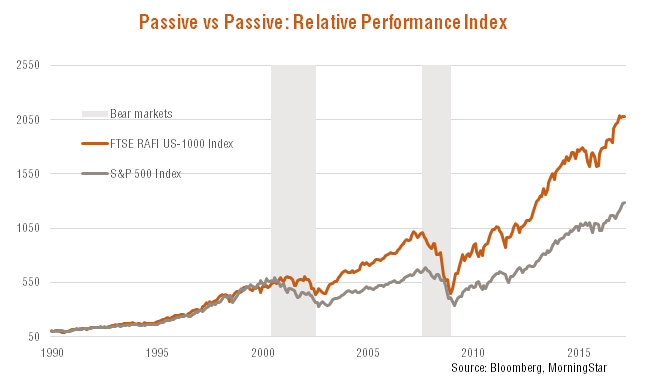 Given that active equity managers, on average, don’t appear to offer much downside risk protection during bear markets, investors should be aware that certain rules-based strategies exist which aim to provide such a feature, while still providing reasonably low cost, diversified exposure to equities.

In summary, it is always important to ‘look beyond the headline’ and focus on the substance of an argument. There may well be more to it than meets the eye!