Hopes and fears regarding a possible US-China trade deal pervaded global markets for much of last week and the tentative agreement struck on Friday was greeted with restrained relief.  The S&P 500 bounced 1% on Friday to be up 0.6% over the week.  Consistent with the risk-on sentiment, US 10-year bond yields rebounded and gold and the $US eased back.

Of course, the stock rebound was restrained because no piece of paper was actually signed.  Rather there was US acceptance of Chinese pledges to buy more agricultural products, not unduly weaken its currency, allow more foreign investment in the financial sector, and better uphold certain intellectual property rights.  In exchange, the US agreed to suspend a planned tariff increase due to take effect tomorrow.  Trump described this as “phase 1” of a potential multi-phase agreement process. The focus now is on whether an actual written agreement can be developed that could possibly be signed at the November 16 APEC summit in Chile.

Risks clearly remain.  As evident earlier this year, there could be a failure to agree on the finer details. And more tariff threats are still possible when attention turns to the next “phases” of discussion.  Past tariff increases remain in place.  That said, Trump has clearly backed down on earlier demands for a “complete deal” – which is consistent with my view that increasing signs that trade tensions are hurting the US economy has weakened his resolve.  Trump may still talk tough, but the prospect of further tariff hikes, at least, appear an increasingly hollow threat.

Whether this tentative peace accord is enough to assuage business and investor sentiment remains to be seen.  Barring a breakdown in trade talks, however, markets will take their lead from the activity indicators, such as whether global manufacturing starts to stabilise or deteriorates further.  I’m hopeful of some signs of stabilisation over coming months.

In terms of the week ahead, focus now turns to the (likely subdued) Q3 US earnings reporting season.  As usual, reporting will commence with major banks, whose results will not be helped by the margin squeeze produced by lower bonds yields. So far at least, however, US earnings are only going through a “soft patch” – last evident in 2016 – partly as payback from the tax cut-related boost last year.  Provided the economy avoids much further weakness, there’s a good chance earnings could start to improve again over the next few quarters.

In this regard, a further update on the health of the US economy will come via retail sales and industrial production reports this week.  The market appears prepared for a soft IP result, reflecting weakness in manufacturing – but soft retail spending (though unlikely) would be a bigger shock.

Last but not lest, Brexit looms large later this week – with a focus on whether the EU and UK Government can agree an 11th hour deal, which would still need to be ratified (possibly over the weekend) by the UK Parliament.

There were further signs last week that tax and interest rates cuts have so far has failed to do much other than re-ignite Sydney/Melbourne house prices.  While the NAB and Westpac measures of business and consumer sentiment remained subdued, home lending bounced higher – led by investors.

The upshot is that while the RBA may feel uncomfortable about possibly reflating a property bubble, it may still feel it has little choice other than provide further stimulus in the months ahead – especially given the Federal Government is still more focused on trying to deliver a budget surplus rather than help boost the economy. 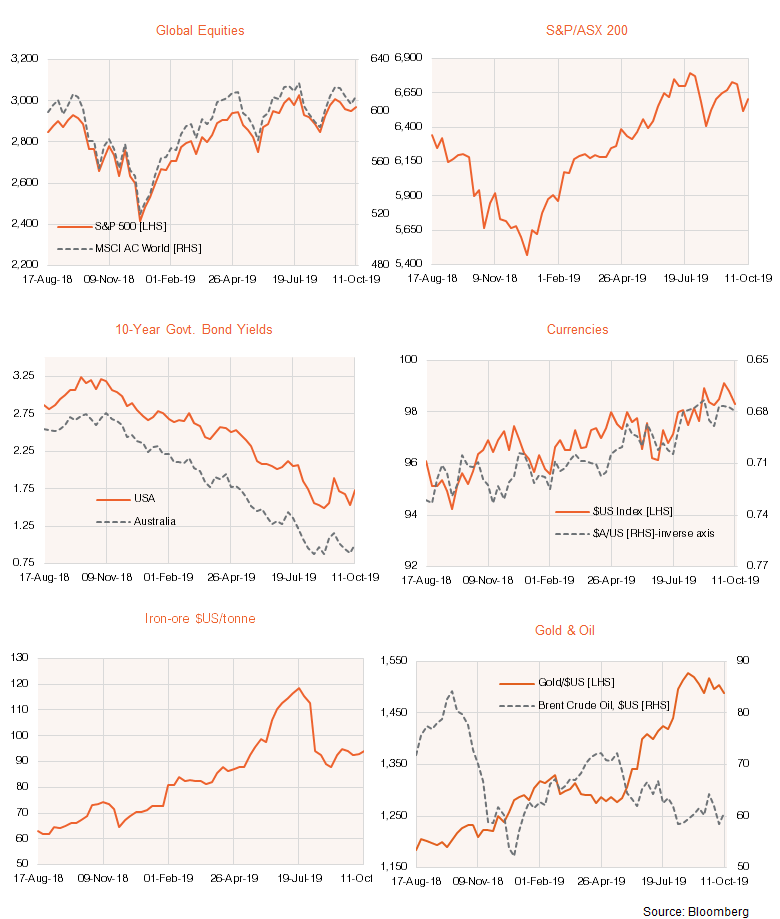