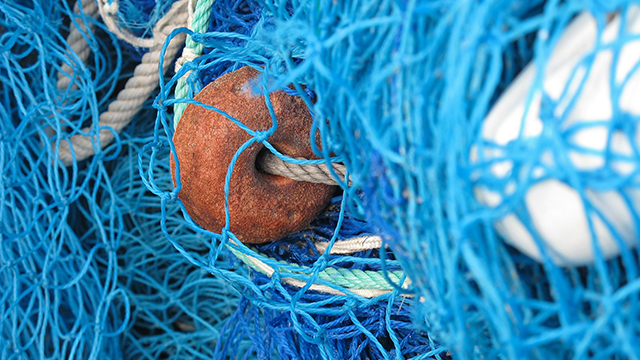 At a conceptual level, diversification is all about spreading risk and not putting all our eggs in one basket. Quantitatively, as I’ve previously explained, one of the main benefits of diversification is lowering the volatility for a given level of expected return. However, another way of looking at it is that diversification also allows us to improve our returns for a given level of risk, either through levering up to our desired risk tolerance or by capturing positive outliers in the return distribution of stocks in the market.

Both here and abroad, a concentration of stock returns has often driven overall market performance, in that a relatively small number of large-cap ‘winners’ can carry an entire index. One key implication is there is potentially a very large opportunity cost of not holding the index or a broad market portfolio (particularly in a bull market), either through attempts at stock picking or trying to diversify using only a few stocks. By constructing your core portfolio using a limited number of securities, you are potentially leaving significant returns on the table by not broadening your exposure.

Much has been written about the underperformance of most active managers against their respective benchmarks, and one possible reason is the degree of outperformance by a relatively small number of stocks. These positive outliers may not have been held or have been held underweight by underperforming active managers, dragging down overall fund returns relative to the index. To investigate the degree that a small number of stocks drive index performance, let’s decompose the returns in the S&P/ASX 200 Index over the past few years and find out which stocks were the key drivers of index performance during broad market rallies. 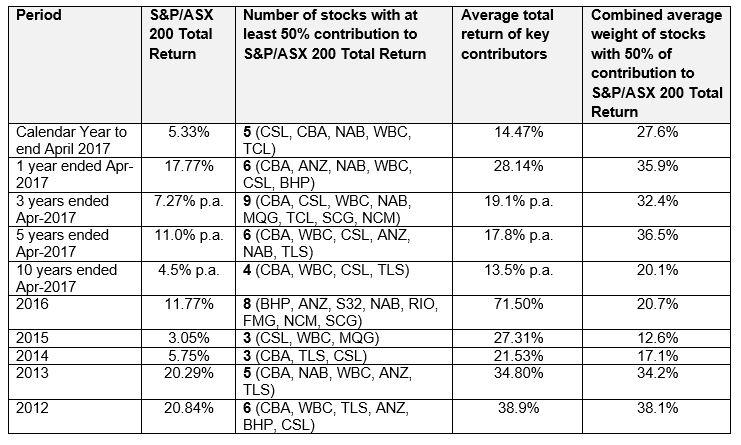 Source: Bloomberg. Total returns include reinvested dividends. Past performance is not an indication of future performance.

What the above table shows is that in most return periods in recent years, a few large cap stocks have accounted for the majority of the S&P/ASX 200’s returns. For example, just 4 stocks – CBA, WBC, CSL and TLS – accounted for 51 per cent of the index’s 55.29 total return (4.5 per cent annualised) over the past 10 years, with the average return of just those stocks 256 per cent over the period (9.9 per cent annualised). There are a number of ways of interpreting the results. One is that large index-beating return possibilities have existed for picking the right stocks in recent years. However, the risk of underperformance and likelihood of failing to include the right stocks are also large because the number of index drivers have been so few.

Now, I would be remiss not to point out that the reverse could well happen during a bear market, where a handful of large-caps could drive the overall index lower (for example, BHP was a particularly large driver of 2011’s market correction and weighed heavily on ASX 200 returns in 2014 and 2015), but assuming we’re taking a long-term view, we should keep in mind that the market tends to trend upwards over time. I would also caution that due to the nature of market cap weighting, past ‘winners’ will account for an increasingly larger index share over time, which we’ve seen for the major banks. This may increase the likelihood that yesterday’s heroes could become tomorrow’s broad market villains in a correction, due to the nature of their outsized weightings. Using an alternative weighting strategy to market cap (such as Research Affiliates’ fundamental weighting methodology) can potentially reduce this risk.

If you have a particularly strong view and have supreme confidence in your stock picking abilities, you should still back yourself. However, it’s worth keeping in mind that failure to pick the few stocks that drive an index’s returns could generate significant underperformance.