It was another modest risk-off week for global equities with the US S&P 500 again failing to push through the previous record high of 3,027 set in late July.  Weaker European manufacturing data, the threat of a Trump impeachment and lingering uncertainty over US-China trade talks took their toll.

In Europe, the slowdown in global trade, Brexit-related weakness in the UK and regulation-related disruption to the German car industry have all conspired to push the EU Markit manufacturing index to a 7-year low of 45.6 in September. Germany’s manufacturing index slumped to 41.4, confirming its manufacturing sector, at least, is in a recessionary quagmire.  The good news is that European-wide services is still holding above the 50 level (only just!) and that US manufacturing and service indices ticked up this month, suggesting lingering resilience.

It’s also the case that a large part of Germany’s current malaise reflects a deliberate postponement in some car production and new models as the industry adjusts to new emissions-testing requirements.  As a result, this element of the slowdown should be largely temporary, with a recovery likely in coming months. If a US-China trade deal can be done and the UK sorts out its EU relationship, Europe might well start to recover.

In the US meanwhile, the decision by the Democrat-controlled House of Representatives to launch a formal impeachment enquiry into the President briefly unnerved markets, before the realisation set in that – even if he is impeached – it would still be very unlikely he’ll be removed from office unless Senate Republicans vote against him.  If anything, the enquiry likely kills any chance of consensus behind a once-mooted large infrastructure spending package.   The US-China dispute also remained cloudy, with Trump at one point suggesting a deal could be “sooner than many think” though by Friday there were reports the US was considering barring Chinese firms from listing on its US stock market.  The argy-bargy between the two sides seems likely to buffet markets until a deal is finally reached.

The key highlight this week will be US payrolls on Friday, with another reasonably solid report expected.  Around 145k new jobs are expected to have been created with the unemployment rate and annual growth in wages holding steady at 3.7% and 3.2% respectively.

Contrary to initial market reactions I took RBA Governor Lowe’s speech last week as a strong hint that rates will be cut again tomorrow – or one month earlier than I had been anticipating.  Indeed, we start the week with markets now seeing a rate cut tomorrow as a 75% chance.  With the unemployment rate recently edging up to 5.3%, and more signs of labour market softness in official job vacancies data last week, the RBA seems to have the ammunition it needs to justify another move – and a cut tomorrow now seems more likely than not.

Data wise, key events this week will be building approvals tomorrow and retail sales on Friday. After a large slump last month, a moderate rebound in approvals is expected – anything else would suggest the housing construction cycle is turning down much faster than feared.  Similarly, after a dismal 0.1% decline in retail spending in July, the market is counting on recent tax and interest rates cuts to push up spending by 0.5% in August.  We’ll see – as the anecdotes from retailers so far have been less than encouraging.  At this stage the only real evidence of an impact of recent policy stimulus has been a rebound in Sydney and Melbourne house prices! 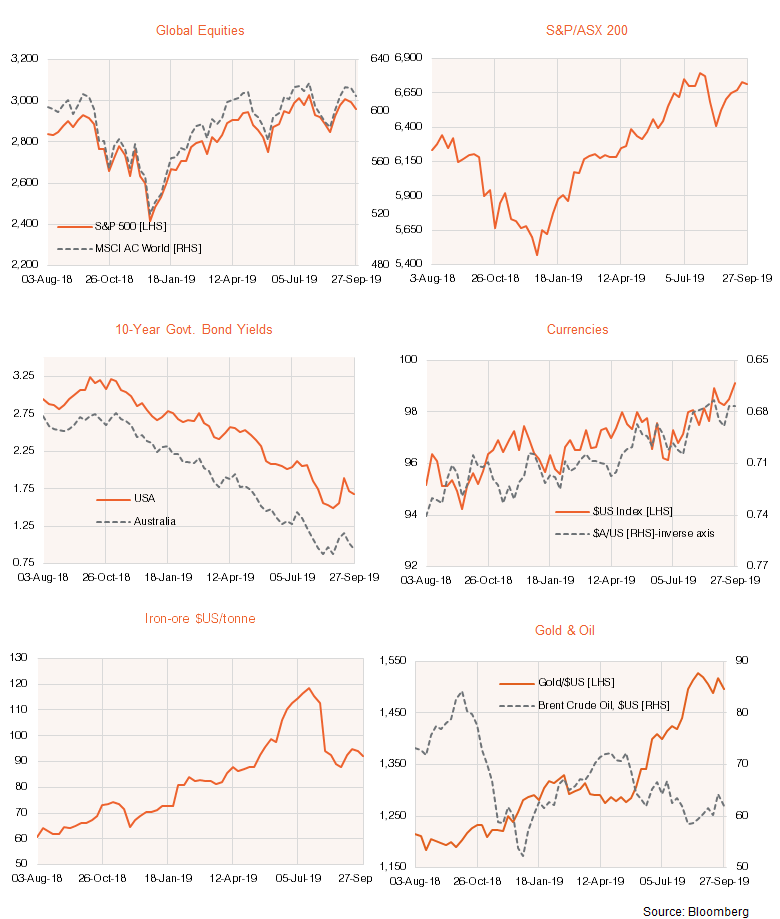