Following a market sell-off, Trump offered a temporary Huawei reprieve one day later, and he continues to post hopeful tweets. That said, with China’s retaliatory tariffs taking effect next weekend, it’s fair to say markets remain in a state of high uncertainty as to how this will play out.  Equities understandably dropped and bond yields continued to head lower.

Sheer self interest suggests neither side really wants a damaging escalation in trade tensions, but it’s also unclear how tensions will be de-escalated given neither side wants to be seen as “caving in” to the other.

In other news, there are more tentative signs that trade tensions are starting to soften the US outlook, with the Markit manufacturing index dropping to a 9-year low of 50.6 in April (from 52.6 in March) and core durable goods orders also falling in March.  That’s perhaps not surprising as new research from the IMF suggests that, so far at least, it is mainly US importers, and to a degree consumers, that are far paying the US tariffs – as Chinese exporters don’t appear to have cut their pre-tariff prices all that much.

There’s not much joy elsewhere in the world. Although Japan’s Q1 GDP result was much better than expected (2.1% annualised growth), private demand was flat, with most strength reflecting a lift in public spending (partly disaster related) and a build-up in inventories.  EU political concerns also continue to simmer, with weekend elections revealing further polarisation in sentiment toward the populist left and right at the expense of moderate centrist parties.  In the UK, May’s looming departure as PM, along with the popularity of the Brexit party in EU elections, seems to increase the odds of a hard UK exit.

In Australia, as expected RBA Governor Phillip Lowe gave a strong hint in last week’s speech that the Bank intended to cut rates next month – and virtually every economist has now fallen into line.  Contributing to the sentiment was a quite weak Q1 construction report – while housing was expected to be weak, there was also a disappointing continued decline in resource-heavy engineering construction.  Along with already known weak Q1 retail sales volumes, the construction reports adds downside risks to next week’s Q1 GDP report.

For the record, I now anticipate the RBA will cut three times this year – in June, August and November.  That said, the one risk to this view is if two rate cuts by August cause a sustained recovery in the Sydney property market, and the notable post-election bounce back in auction clearance rates last weekend (to 70%) bears watching.   Given Sydney house prices remain very expensive, and the labour market is softening, however, my base case view is that the market will settle back to a more subdued pace in coming weeks.

Key global data this week includes US real consumer spending and prices on Friday.  With annual core US consumer prices only at 1.6%, another soft result could heighten talk that the Fed might cut rates later this year (a rate cut is now fully priced in by the market). With the unemployment rate so low, a US rate cut still seems a stretch – but I would not rule it out (and nor, perhaps, is the RBA).

Also key on Friday will be several Chinese manufacturing indicators – with the issue being the extent to which recent fiscal stimulus if offsetting the drag from the trade war.

In Australia, Q1 business investment should bounce back – but only modestly – in Thursday’s capital expenditure survey, which will leave the market likely still contemplating a weak GDP report next week.  Also critical will be an update on corporate Australia’s investment intentions, which I suspect will be downgraded modestly in the wake of global trade tensions and recent weakening in local housing construction and consumer spending. After declining sharply in April, May building approvals might also bounce back a little – but not change the downward trend in this key lead indicator of housing construction. 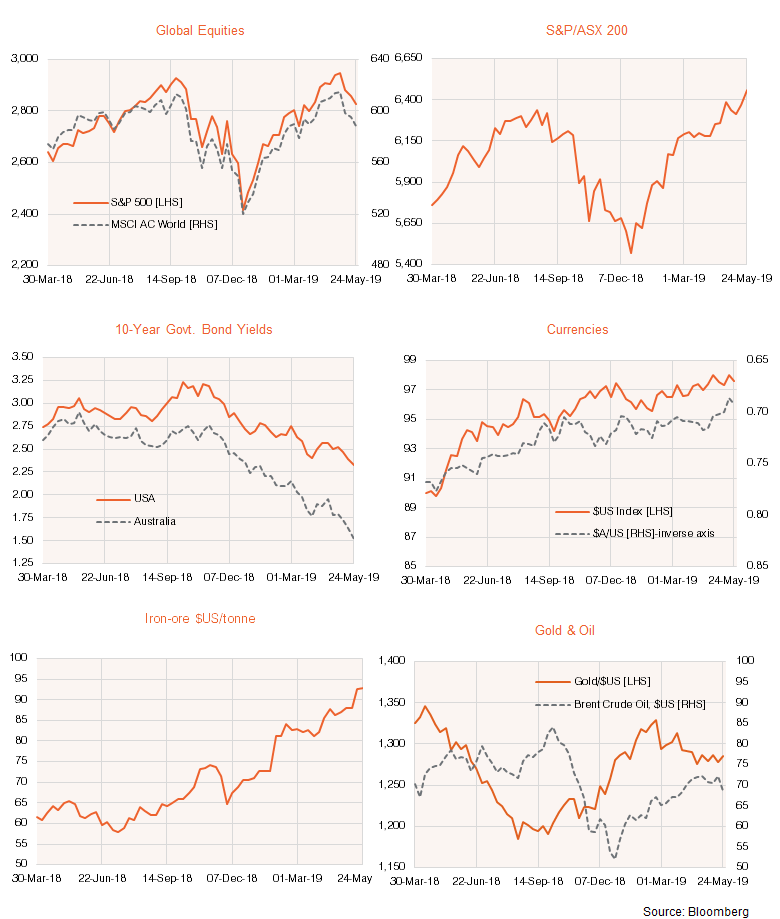