Global equities saw fit to focus on the positives last week, taking heart in the Fed’s renewed pledge to support growth and in the awe-inspiring ongoing strength in tech sector earnings.

Indeed, in another case of “bad news is good news” the Fed last week again provided a sobering outlook for the economy, while at the same time pledging to provide as much stimulus as needed. That was enough for the market, which pushed equities up and 10-year bond yields down to a new historic low of 0.53%.

Also helping last week, America’s tech giants stepped up to the plate and delivered all that could have been hoped – with Alphabet, Apple and FaceBook all handily beating Q2 market earnings expectations. Overall the Q2 earnings season remains impressive with an above average 80% of companies beating (beaten down) estimates.

Against this, of course, U.S. weekly jobless claims rose for the second week in a row – suggesting the U.S. economy is slowing again – while the country is still battling to contain the virus and Washington is dithering on providing a new round of fiscal stimulus. U.S. Q2 GDP was also a shocker, though no worse than expected, with the economy shrinking at an annualised rate of 33%.

Where does this leave us? The S&P 500 appears to be consolidating just above its recent break-out level, though strength remains heavily dependent on the tech/FAANG stocks. In terms of the week ahead, Friday’s U.S. payrolls loom large, with an expected 1.6 million jobs expected to have been returned in July (after a whopping 4.8 million were added back in June) – though a potentially even more important leading indicator will be whether weekly jobless claims (released one day earlier) rise for a third week in a row.

Otherwise, the market will be hoping that Washington will settle on a new stimulus package, particularly given that the temporary $US600 per week Federal boost to State unemployment benefits ended last Friday. Also critical will be whether America’s COVID battle gets better or worse – while new cases appear to be peaking in recently hard hit states such as Texas and Florida, fear remains that it will now spread to a swag of other states.

The Australian market had even less reason to cheer last week, with a string of downbeat economic reports and a worsening in Victoria’s COVID-19 outbreak. The ABS’s fortnightly labour market tracker (see chart below) suggests total employment has been easing back again since late June. And the ABS’s survey of business suggests a huge swathe of corporate Australia remains dependent on various government support measures. In what should be no surprise, home building approvals slumped a further 4.9% in June after a 16% crash in May.

This week begins on a pessimistic note, with confirmation yesterday that Victoria will move to even tougher ‘stay at home’ restrictions – which will destroy the last vestiges of hope for many thousands of struggling small businesses in the retail and hospitality sector.

The bi-annual earnings reporting season also starts this week, where companies will try hard to put a positive spin on what is a very challenging economic period. Earnings will clearly be depressed (especially outside of resources, consumer staples and health care), but whether they’ll be as depressed as analysts expect – and whether CEOs can instil much confidence as to the future – remains to seen.

As it currently stands, Bloomberg analyst consensus estimates suggest earnings fell by around 25% last financial year, and will bounce back 10% this financial year. I  expect both numbers to be somewhat lower in a few weeks’ time.

Last but not least, the RBA meets to set policy again on Tuesday and will provide another sombre economic outlook in its Statement on Monetary Policy on Friday. Although the RBA’s policy kitbag appears largely empty, it has promised it can do more if need be. Indeed, a possible surprise cut in the official cash rate to 0.1% this week can’t be ruled out, given it was a possibility raised by Governor Lowe in a recent speech. Melbourne’s lurch from bad to worse last week could be the catalyst!  Even if the RBA does not cut this week, I now see such a move as increasingly likely by November. 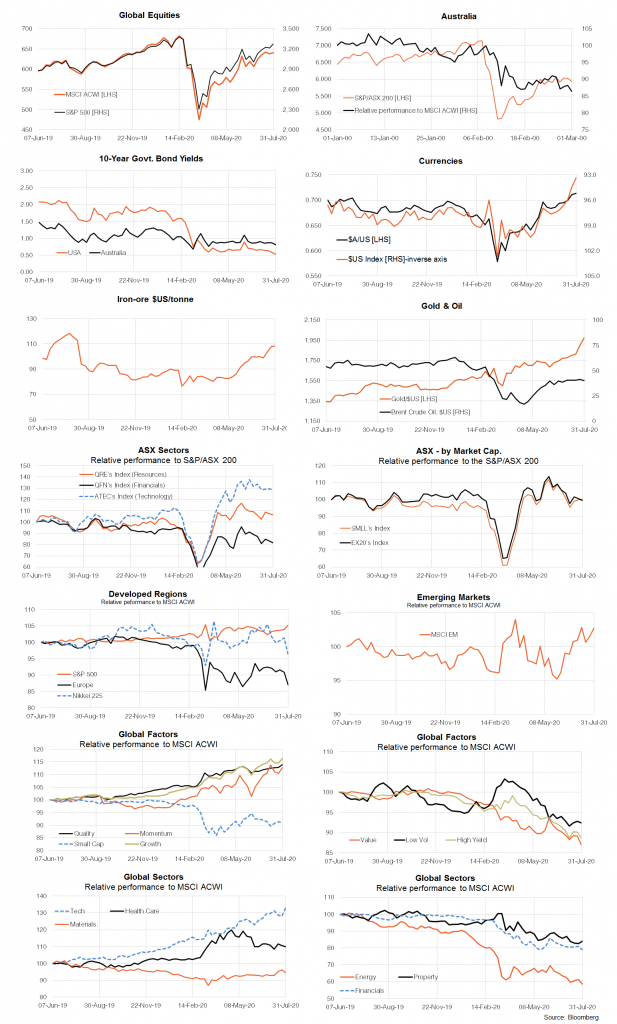