Wall Street hit new record highs last week with investors remaining ever hopeful of a trade deal.  On that score, the latest titbit of information was China’s pledge to tighten protections for intellectual property.  That said, we’re still in a waiting game – with even those itching to take profit likely reluctant to sell until “the deal” is finally announced and signed.

The US economy, meanwhile, hums along – with annualised growth in Q3 GDP revised up a touch to 2.1% (from 1.9%) and durable goods orders surprising on the upside.  The latter ads support to the view that the tariff and auto strike related mid-year slowdown in US business investment/manufacturing is starting to stabilise and could well recover as we head into 2020.

Apart from any trade news, key highlights globally this week include US manufacturing indices tonight and the all-important payrolls report on Friday. As noted above, US manufacturing is showing tentative signs of stabilisation and recovery, while jobs growth is also expected to remain firm.

Despite ongoing signs of weakness in the local economy, stocks continued to be pushed higher by the upbeat global mood.  Indeed, the S&P/ASX 200 touched a new record, even as local reports on Q3 construction and business investment were lacklustre. According to the latest “Capex” survey, planned growth in business investment spending over 2019-20 was been scaled back notably in the non-mining (services) sector, which was only partially offset by more signs of a modest recovery in long dormant mining investment.

In other news, RBA Governor Phil Lowe suggested he would only contemplate quantitative easing in Australia (i.e. buying up government bonds to lower long-term bond yields) if the official cash rate had reached a “lower bound” of 0.25%.  Myself, along with many other economists, had though the RBA’s lower bound was 0.5%.  This new revelation has caused me to promptly revise my cash rate call – and I now see two rates cuts in H1’20 taking the cash rate to 0.25%.  The RBA may then eventually be dragged – kicking and screaming – into a QE bond buying program in the H2’20 if local economic growth remains soggy.

That said, while I think a cash rate of 0.25% is quite likely, QE now seems a little less likely.  What’s more, there’s a chance the economy could start to improve my mid-2020 – if a trade deal causes business investment plans to lift, for example, and/or housing construction bottoms out. Most critically, consumers could also start spending again – perhaps due to a reflation in house prices.  There’s also a chance the Fed’s could provide more fiscal stimulus in the May budget via, for example, bringing forward planned future income tax cuts.  Against all this, however, is the risk of a belated weakening in employment and rising unemployment, which would keep household income growth very weak.

Of course, we’ll learn a lot more about the economy through a bunch of key economic reports this week.  For starters, we’ll get updates on business profits and inventories today, and public demand and exports tomorrow – which will firm up expectations for the Q3 GDP report on Wednesday.  At this stage, Q3 GDP is likely to be soft again (growth around 0.5%), reflecting broad based weakness in private demand, ranging from business investment, home building and consumer spending.

More forward looking indicators will be house prices and building approvals today, and retail sales on Thursday.  Another strong house price result is likely, though building approvals should resume their downtrend.  And we’ll learn whether tax cuts, lower rates and rising house prices have finally helped boost consumer spending when October retail sales are released on Thursday. Judging by soft retailing anecdotes and still downbeat consumer confidence, I doubt it! 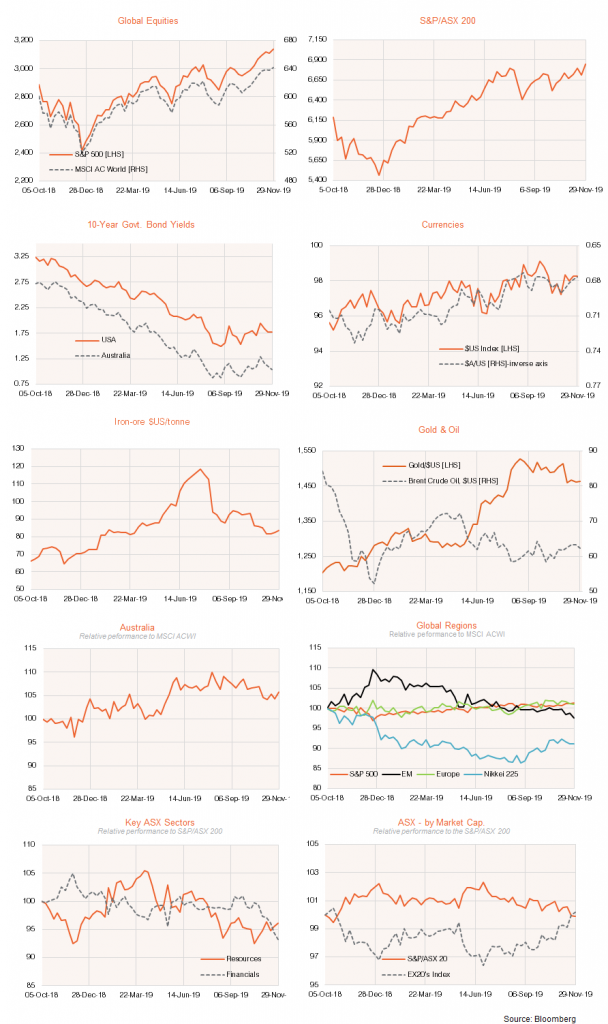