After basking in fever pitch risk-on sentiment in the previous week, global markets slumped last week as dour economic forecasts from the U.S. Federal Reserve and a rise in COVID-19 cases in some U.S. states unnerved investors. Equities, bond yields and the $A dropped back, while gold firmed. Lower bond yields also partly reversed the previous week’s early attempt at a rotation from growth to value sectors such as financials.

While the Fed had previously warned of America’s slow economic recovery (hence the extreme monetary measures), last week was the first occasion for actual economic forecasts to be released – which were naturally sobering. According to the Fed, GDP by the December quarter will be down 6.5% from Q4’19 and the unemployment rate will still be at an elevated 9.5% (from 13.3% currently). Not helping sentiment was evidence of growing COVID-19 cases in some U.S. states such as Texas, Florida and a range of southern States.

Further tests await global markets this week – in particular whether re-opening hopes can still push equities higher. Fed chair Powell, for example, testifies before Congress, and he may try to spin a more upbeat/hopeful outlook – but whether markets listen remains to be seen. Also of interest are U.S. May retail sales on Tuesday which are expected to bounce 8% after slumping 16% in April. If the market can’t rally on retail sales it will be a strong signal that the initial re-opening bounce has finally been priced. If so, that means economic data – which will provide guideposts on the actual shape of the recovery – will start to matter again.

Also taking the gloss off re-opening is the reality that COVID-19 cases may well be bouncing back. Along with the U.S., weekend reports of outbreaks in China and Korea may test markets when they re-open this week.

Last but not least, China releases its monthly ‘data dump’ today, covering data such as retail sales and industrial production – though any optimism with regard to its ongoing economic recovery will likely be checked by renewed virus concerns.

Local data last week was encouraging, though equities and the $A were obviously affected by the global sell-off. The National Australia Bank measure of business conditions bounced back in May after slumping in April, though conditions remained at a very weak recessionary level.

The Westpac/Melbourne Institute measure of consumer sentiment rebounded further in June and has now largely recovered the sharp CV-related losses in March and April – though it remains somewhat below average, reflecting our pre-CV challenges of weak household income growth.

Contrary to the risk-off sentiment last week, iron-ore prices last week continued to rise, which may have helped limit losses in the $A.

A local focus this week will naturally be Thursday’s May labour force report – even though its information content has been greatly compromised by distortions caused by the JobKeeper program. Although the official unemployment rate is 6.2%, for example, Treasury concedes the true current rate is probably closer to 15%. For the record, the market is anticipating a loss of a further 80k jobs after April’s huge 590k collapse, with the unemployment rate expected to rise to 7%. Much will depend, however, on how non-working households filling out the survey define their status. 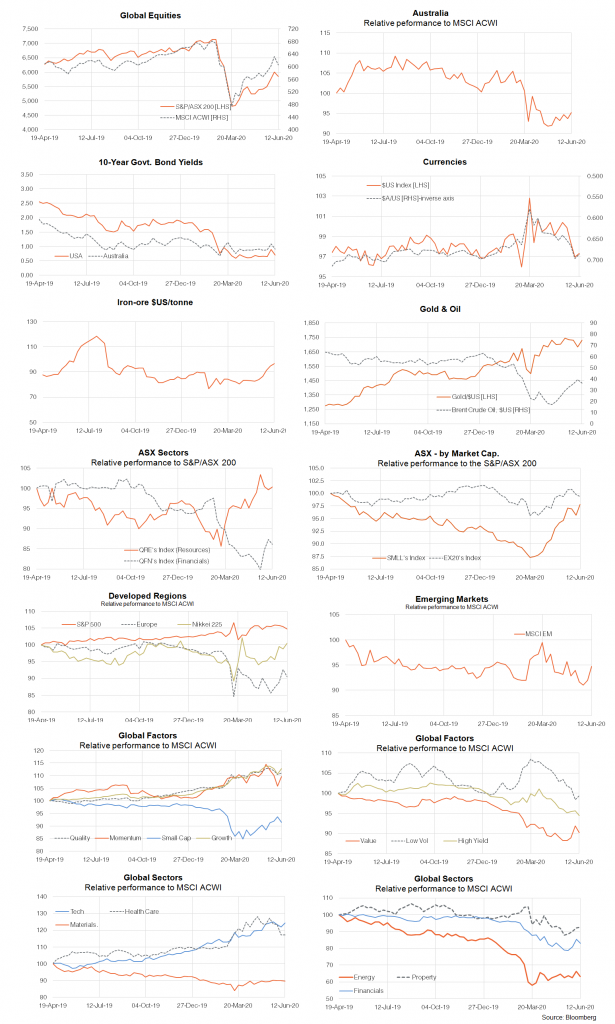