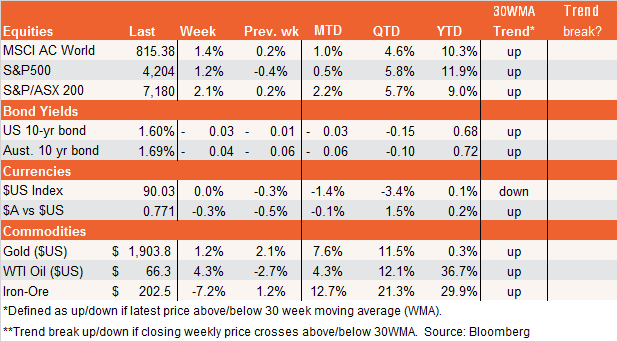 Global equities managed to post positive returns last week – after two weekly declines – even in the face of a modestly higher than expected U.S. consumer price inflation result. Indeed, annual growth in the U.S. core private consumption expenditure deflator (PCED) came in at 3.1% in April, compared to the market estimate of 2.9% – but interestingly the U.S. bond market barely budged. This suggests either the ‘whisper number’ on the street was even higher and/or the market is already trying to look through the inflation results, comforting itself in the possibility that this may well represent the peak in annual U.S. consumer inflation for the year. 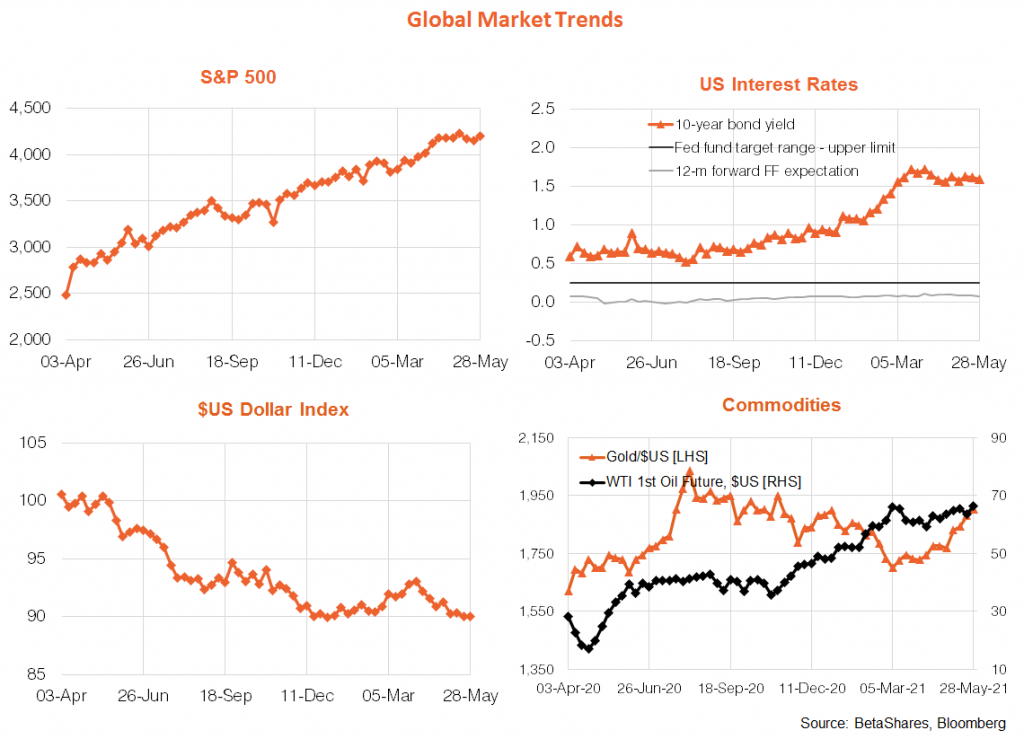 Meanwhile, while a parade of Fed speakers all maintained the mantra that the uptick in inflation is likely to be transitory, more appear to be warming to the view that talk of scaling back bond purchases will likely need to commence sometime later this year. Given the likely ongoing strength in the U.S. economy (with 50% of the population now fully vaccinated), it’s clearly a question of when not if the Fed moves to scale back bond purchases. For markets, however, the key will be whether reduced bond purchases (and even the talk in this direction) has much impact on bond yields whilst the Fed still maintains the pledge not to raise short-term interest rates for at least a year or so. My modelling suggests that the U.S. 10-year bond yield could well hold below 2% even in the face of reduced bond purchases – provided the market remains comfortable with no likely official rate increases within a twelve month time frame. In turn, that would still bode well for equity valuations – and equity prices – holding up reasonably well.

A further hint that global inflation concerns may be nearing a peak were heightened noises from Chinese officials last week pledging to clamp down on commodity price speculation. Of course, given supply bottlenecks and a V-shaped recovery in global demand, it’s unlikely much of the strong run-up in commodity prices so far this year – such as for iron-ore – has been merely ‘speculative’. Either way, China’s policy concern with inflation has clearly picked up, which suggests further commodity price upside could be limited. Iron-ore prices dropped 7.2% last week, though remained just above $US 200/tonne. Oil prices, however, did push higher, though global supply could receive a boost from Iran if it finally manages to reach a new nuclear deal with the United States.

The key highlight globally this week will be Friday’s U.S. payroll report for May. After a surprisingly low 266k gain in employment in April, the market is anticipating a solid 650k jobs gain which would suggest April’s result was just a ‘rogue’ number. That said, how the market reacts to a higher or lower result is unclear – it could rejoice at a strong employment number or equally applaud a low number if the latter reduces the chances of Fed ‘taper talk’ any time soon.

In view of inflation talk, also of interest this week will be the degree of anecdotal evidence of pricing pressure in the Fed’s Beige Book report on the economy, as well as pricing/supplier delivery pressures in the U.S. indices of manufacturing and service sector activity. 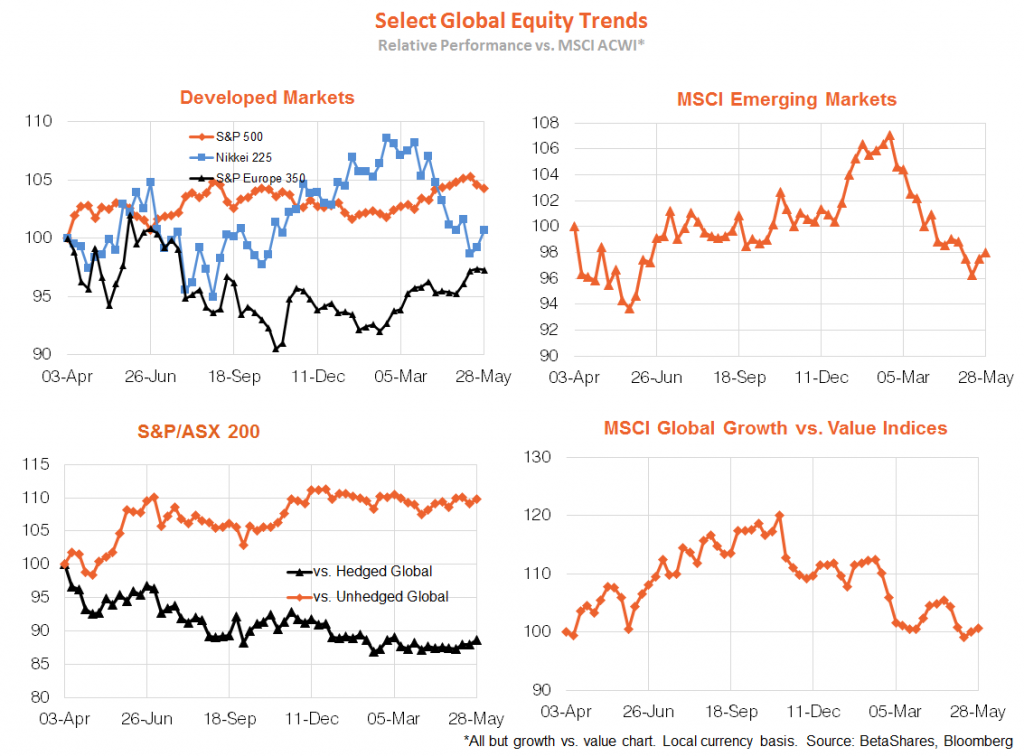 Australian equities enjoyed solid gains last week with further encouraging local economic data in the form of Q1 construction work and business investment. Helped by government support packages, housing construction and business investment in new equipment rose strongly, which in turn should feed through into another solid Q1 GDP result this Wednesday. Consumer and government spending also remain upbeat. All up, the market anticipates a decent 1.1% gain in Q1 GDP, after solid 3% gains in Q3 and Q4 last year – such that activity will likely recoup all of the COVID-related losses in H1’20.

Of course, the new challenge for the economy is Melbourne’s fourth lockdown and more broadly the surprisingly slow vaccine rollout – seemingly due to a combination of public hesitancy/complacency and botched government purchasing, marketing and distribution. As we’re seeing in Asia at present, our apparent complacency with regard to vaccines leaves us vulnerable to new outbreaks! Indeed, given our relatively better performance in dealing with COVID last year, it’s staggering America has already managed to vaccinate half its population – which is ten times larger than our own.

The RBA also meets this week, but it has already indicated its big decisions – on whether to extend its bond buying and bond yield target policies – will instead be made next month. The market appears confident that both policies will be extended. Indeed, it seems unlikely the RBA will signal policy tightening ahead of the Fed. 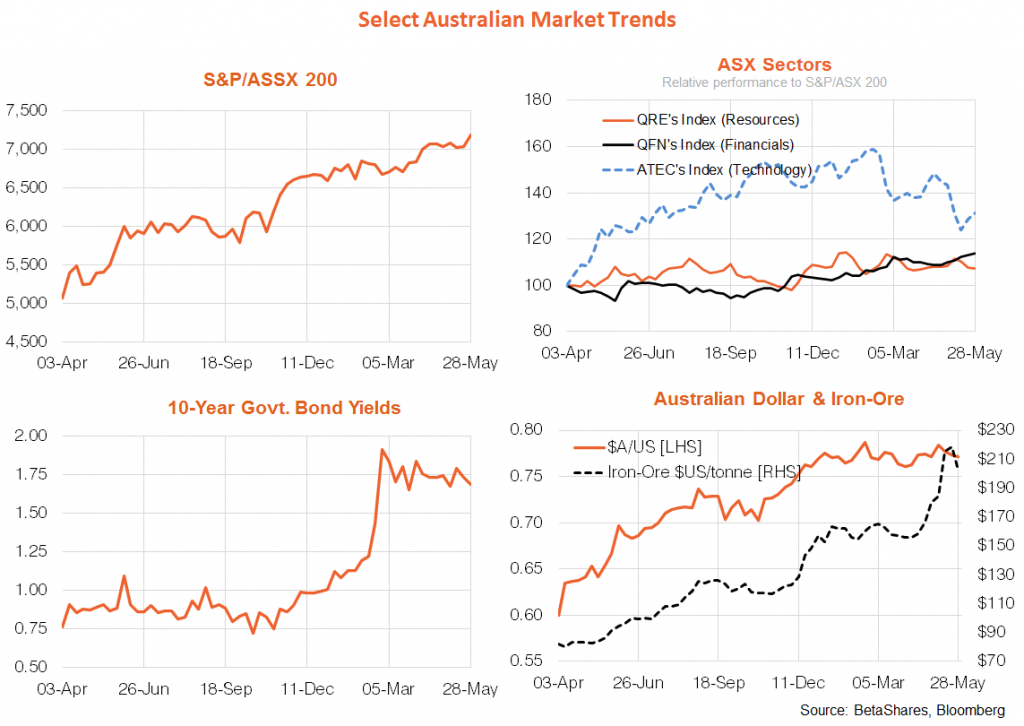