The escalation in US-China trade tensions continued to dominate global market sentiment last week, with bond yields dropping lower and equities prices generally pulling back. That said, the fallout from the escalation in trade measures has been contained by continual US assurances that talks are ongoing and a deal might yet be done.  Trump’s decision to at least delay planned tariff increases on cars (which would particularly hurt Europe and Japan) and resolve lingering trade disputes with Mexico and Canada also provided some market support. In what appears somewhat of a flight to safety, the $US continued to firm.

In Australia, housing finance and the NAB business survey both pointed to a weakening economic outlook, with the highlight being a lift in the unemployment rate to 5.2% despite continued solid employment growth.  That higher unemployment rate might be enough to all but cement an RBA rate cut in June. If it’s coming, I’d expect RBA Governor Phil Lowe to give a strong signal to this effect in an important speech on Tuesday.

Of course, what might now give the RBA some pause is the LNP’s surprise victory in Saturday’s Federal election.  With the risk of negative gearing and franking credit changes now removed, it might give the housing and share market at least a short-term boost. Planned upfront tax cuts – delivering around $1,000 to low/middle income earners once they file their tax returns – could also deliver at least a short-term boost to consumer spending in the second half of 2019.  All that said, however, the surprise election result seems unlikely to change the housing-led weakening outlook for the economy, and so should not remove the likelihood of at least two RBA rate cuts this year.

Reflecting last week’s trade concerns and the higher unemployment rate, the $A decisively broke support levels around US 70 cents – even though iron-ore prices continued to rise!  It’s happy days at least for Australia’s resources sector.

Trade tensions will again be a major focus, with markets keen to be reassured that China and the US are at least still talking.  Earnings reports from a few major US retailers will also round out the reporting season, with some risk that trade concerns lead to cautious earnings guidance – even though actual earnings results might hold up well. Minutes of the recent Fed meeting will be be closely scrutinised for any hint that it’s thinking about cutting rates later this year due to still persistent low inflation.  I suspect the market will continue to be disappointed on that front, due to the reality that the US economy remains generally solid and labour market tight.

In Australia, the Q1 construction activity report will provide a timely update on the degree to which housing construction is weakening and whether this is being offset by continued strength in infrastructure and commercial property development.  As noted above, Phil Lowe’s speech will also be a major focus. 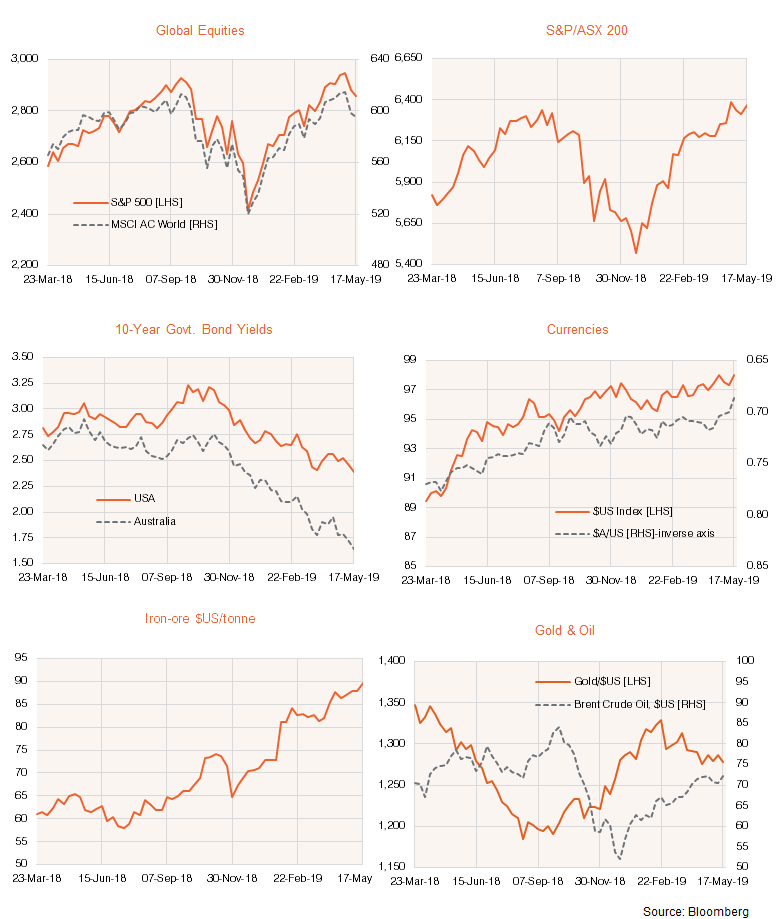