Two major market concerns appear to have been resolved over the past week, with US President Trump concluding his “phase 1” deal with China and the UK Conservatives romping to victory and making certain the UK’s “soft exit” from the EU.  That said, with this expected good news largely anticipated and priced into markets over recent weeks and months, global equities could barely flicker higher on Friday.  The question now is whether this is really a case of “buy the rumour, sell the fact”?

While a period of consolidation/profit taking may well face equity markets for a period, my view is that there is still good news that could allow markets to trade higher over 2020. For starters, provided that Trump does not feel compelled to jack up tariffs against China next year, business uncertainty should ease and trade and investment start to recover.  As regards trade, my sense is that while the US will continue to negotiate with China next year, Trump won’t dare raise tariffs – the only issue is whether the tariffs that still remain (which are America’s bargaining chips) will eventually fall back or remain in place.  As regards Brexit, while the UK still needs to negotiate a free trade agreement with the EU, the heat in this issue for global markets and UK business in particular should soon dissipate.

The Fed also left rates on hold last week and signalled – in line with my expectation – that it now sees rates as on hold over 2020. That should remain the case provided Trump does not antagonise China again (which would see lower rates) or US wage/price inflation accelerate (which would see higher rates).  I don’t expect, but would view the latter as the more serious market impediment.

In terms of the week ahead, China’s monthly “data dump” covering industrial production and retail sales are due out today.  Of interest will be the extent to which the economy has slowed much further, but to an extent this is now “old news” in light of the apparent trade truce.  Oh, and the US President is likely to be impeached on Thursday! But given that the Senate is very unlikely to vote Trump out of power, it will be duly ignored by markets (even the Democrats have largely lost interest in this issue, though still feel compelled to follow through on their threat given clear indications that Trump did try to get political favours from the Ukrainians).

Two key pieces of local data last week were again uninspiring, with the NAB index of business conditions holding steady at below-average levels, and the Westpac measure of consumer confidence dropping another 2%, to also remain at below-average levels.  So despite the “trade truce”, a rate cut from the RBA next February still seems quite likely. Note also that after showing some promise earlier this year, the local share market has also tended to globally under perform in recent months – a feature that may well persist over 2020.

Key local highlights this week are the mid-year budget review today and the labour market report on Thursday. While growth and inflation forecasts are likely to be shaved back in the budget update, still broadly firm iron-ore prices should allow the Government to retain its 2019-20 budget surplus expectation. As a result, the Government will remain loath to provide any extra stimulus at this stage.  My view is that stimulus is likely in the May Budget, however, especially if the persistent weak economy forces the Government by then to concede the budget will dip back into deficit over the forward estimates.  If it’s a deficit, it might as well be a big one!

Also of interest, the November labour market report is expected to show continued modest employment growth (of around 15k) with the unemployment rate steady at 5.3%.  The resilience of the labour market in the face of an otherwise weak economy remains impressive, but I suspect we’re on borrowed time and conditions will more clearly weaken by early/mid-2020. 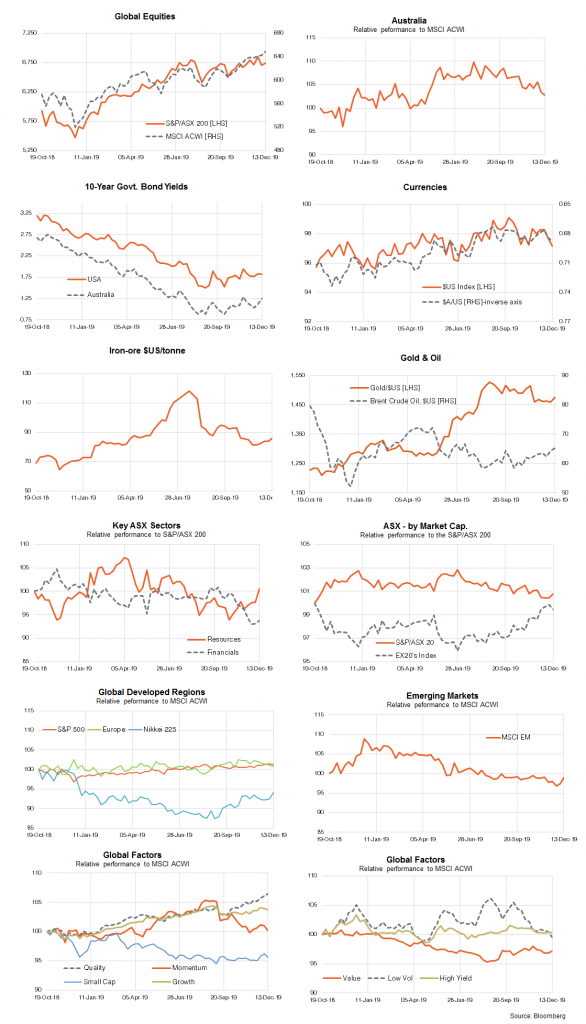