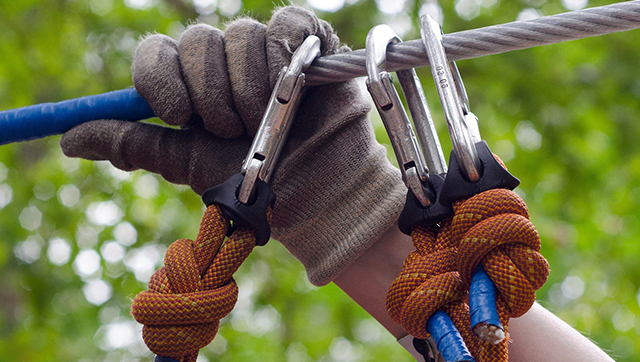 Since bottoming in February last year, and especially since the election of Donald Trump as US President, the Australian equity market has posted good gains, with the S&P/ASX 200 now within striking distance of the psychological 6000 level.  This post assesses both the technical and fundamental challenges facing the market. All up, the analysis suggests that it’s quite possible for the market to reach and hold the 6000 level this year, but further gains beyond that might be constrained by the still-muted outlook for earnings growth in the non-mining sectors of the economy.

A Great 12 Months for the Market

Last year was a classic case in which equity markets are said to have climbed the “wall of worry”. Despite fears of higher US official interest rates, the “Brexit” decision, and the election of Donald Trump as US President, the S&P/ASX 200 Index wound its way ever upward since touching a low of 4,826 points on February 9, 2016.  Although the market has swung in a wide range, the trend has clearly been upward, with the market making “higher highs” and “higher lows” throughout this period, and prices now trading above key 50 and 200 day moving averages.

At current levels of around 5,800 points, the market is up 20% from its early-2o16 low – which technically means we’re entering “bull market territory” again.  The market just needs to rise a further 3.5% price gain to reach 6,000! 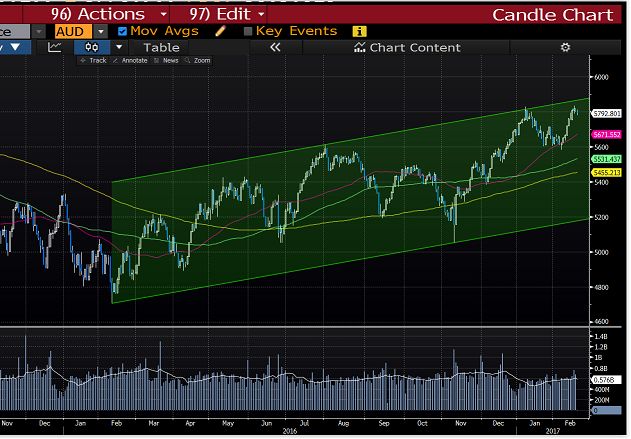 Whether the market can move higher clearly depends on the two key components that drive prices: valuations and earnings. The outlook for each is moderately encouraging.

At best, valuations should not be a major negative this year

An apparent challenge for the market is the fact that price-to-earnings valuations are already above long-run average levels. Based on current consensus earnings expectations (as compiled by Bloomberg) the market is trading on a price-to-forward earnings ratio of 15.8, compared with a 10-year average of 13.8.  That said, as seen in the chart below, an above average PE ratio is largely justified by below-average bond yields. Indeed, with 10-year Australian government bonds at around 2.8%, the “fair-value” PE ratio – based on the long-run relationship below – is around 16, or  1% above the current level.  Of course, last year the market was able to trade at even higher valuations, reaching 17 times forward earnings in mid-2016 – though this was a time when bond yields were also much lower at around 1.8%. 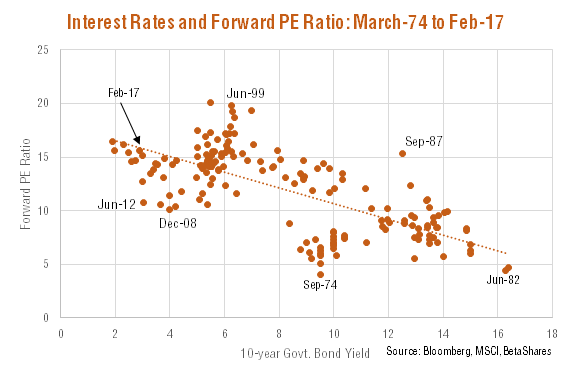 With bond yields under upward pressure from improvements in the global growth and inflation outlook – not to mention higher official US interest rates –  it’s hard to see PE valuations being a major positive market driver in coming months.   On the view that local bond yields rise modestly further to say, 3% by year-end, the fair-value PE ratio would only drop from 16 to 15.8, or in line with current valuations.  A bigger rise in bond yields – to, say, 3.5% – would lower the fair-value PE ratio to 15.4, or the level as at the end of last month.

The second challenge for the market is earnings. Largely due to rising commodity prices, earnings expectations have been upgraded in recent months. Actual forward earnings have been on the rise since August last year, which is a nice change from declines over the previous two and half years.

Can forward earnings continue to rise?  As at end-2016, the market’s earnings expectations then implied a 6.5% rise in forward earnings over the following 12 months.  As seen in the chart below, however, analysts tend to be overly optimistic, with the average being a 7.3% downgrade to expected year-end forward earnings as the year unfolds. 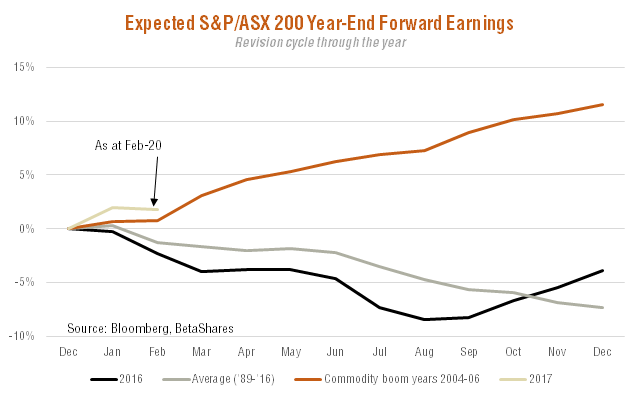 As it turned out, the downgrade to expected earnings last year was a little less than the historic average, thanks to the resource-driven rebound in earnings expectations in the second half of the year.  Indeed, over 2016 as a whole, forward earnings actually rose by 4%, which was only a 4% downgrade from the expected 8% growth expected at the start of the year.

Another year of double-digit equity returns?

All up, the above analysis suggest the market’s current “above-average” PE valuation could be sustained provided bond yields this year don’t rise much further.  Given the Reserve Bank is likely to remain on hold and, if anything, retains a bias to cut rates further, that seems quite achievable.  At the same time, thanks to the lift in commodity prices at least, there are grounds to think the forward earnings could rise modestly further – say by around 4-5% – this year. All up, that suggests scope for the S&P/ASX 200 to reach and hold the 6000 level, or 6% up on end-2016 levels. At the same time, dividends should be expected to contribute a further 4 to 5% return, implying the market could perhaps enjoy another year of modest double-digit returns.