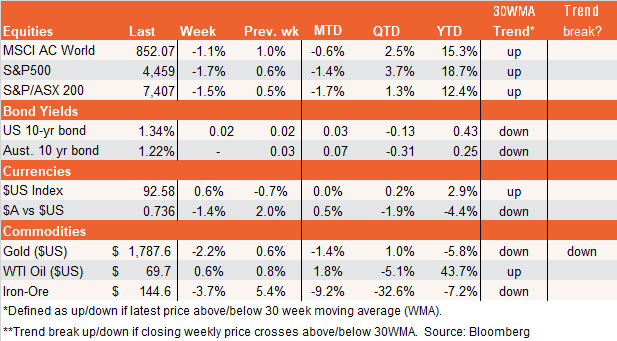 U.S. stocks sagged last week – absent any clear trigger – reflecting general concerns with a combination of weakening growth due to delta, but also persistent pricing pressures due to lingering supply bottlenecks, or what some are already over-excitedly suggesting is a return to ‘stagflation’.

To be sure, the Fed’s Beige Book review on the economy did note a modest downshift in activity during August with fewer people travelling and eating out as delta cases mount. At the same time, business also reported cost pressures and difficulty in attracting staff. Add to the mix Friday’s report of another solid gain in producer prices during August, and general commentary from Fed speakers suggesting most are still keen to announce a tapering in bond purchases by year-end despite short-run delta uncertainties. At this stage it now seems quite likely the Fed will announce (and likely begin) tapering at the November policy meeting, though it could announce a November start to reduced bond buying as early as next week’s policy meeting (thereby giving the market plenty of advance notice).

Indeed, it was notable that bond yields edged up last week despite the weakness in stocks. The $US also firmed, while gold sank. That said, also notable last week was strength in Asian equities, perhaps on the view that the delta impact on regional growth is starting to wane, but also on Friday reports of a potential thawing in U.S.-China trade tensions.

The global highlight this week will be Tuesday’s U.S. consumer price index report, which is expected to show a gain in core prices of 0.3%, with annual growth slowing to 4.2% from 4.3%. Any upward surprise could hurt sentiment given market nervousness of just how ‘transitory’ high US inflation will prove to be. Also of note will be the extent of any bounce back in Friday’s consumer sentiment report, given it took a tumble in August on delta concerns. China on Tuesday also releases its monthly reports on retail spending and industrial production, which I expect to confirm slower growth due to delta-related concerns.

A firmer $US and resumed weakness in iron-ore prices saw the $A fall back a little last week, while local stocks also followed Wall Street lower. The RBA’s policy meeting gave mixed signals with regard to stimulus: while the Bank did not postpone its planned tapering in weekly bond purchases from $5b to $4b (as I expected), it did extend the period before it considers a potential further reduction in bond buying from two months (November) to five months (February). Either way, the RBA still seems confident growth will bounce back smartly once NSW/VIC lockdowns are phased down (I know at least one fully vaccinated economist keen to spend a bit more in a few Sydney pubs and restaurants, not to mention seeing a barber!)

Among equity sectors, the weakness in iron-ore prices has hurt resource stocks in recent weeks, with financials and technology fairing better.

The local data highlight this week will be Thursday’s employment report, which is expected to show a 70k lockdown-related slump in employment during August. Although shocking, this should come as little surprise to the market. 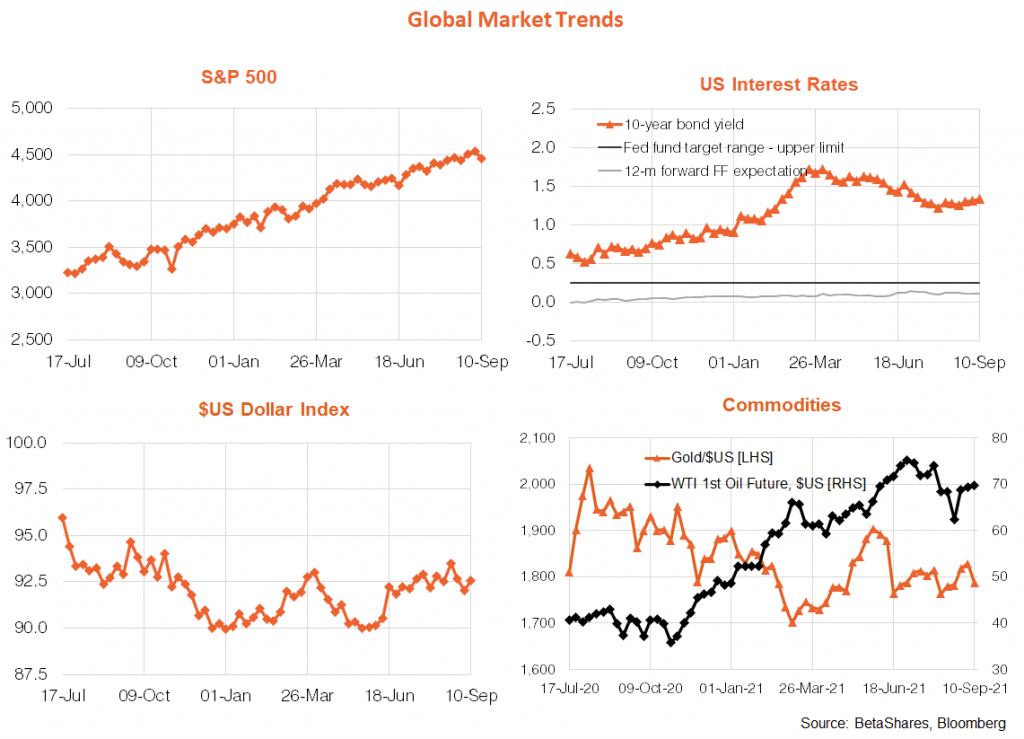 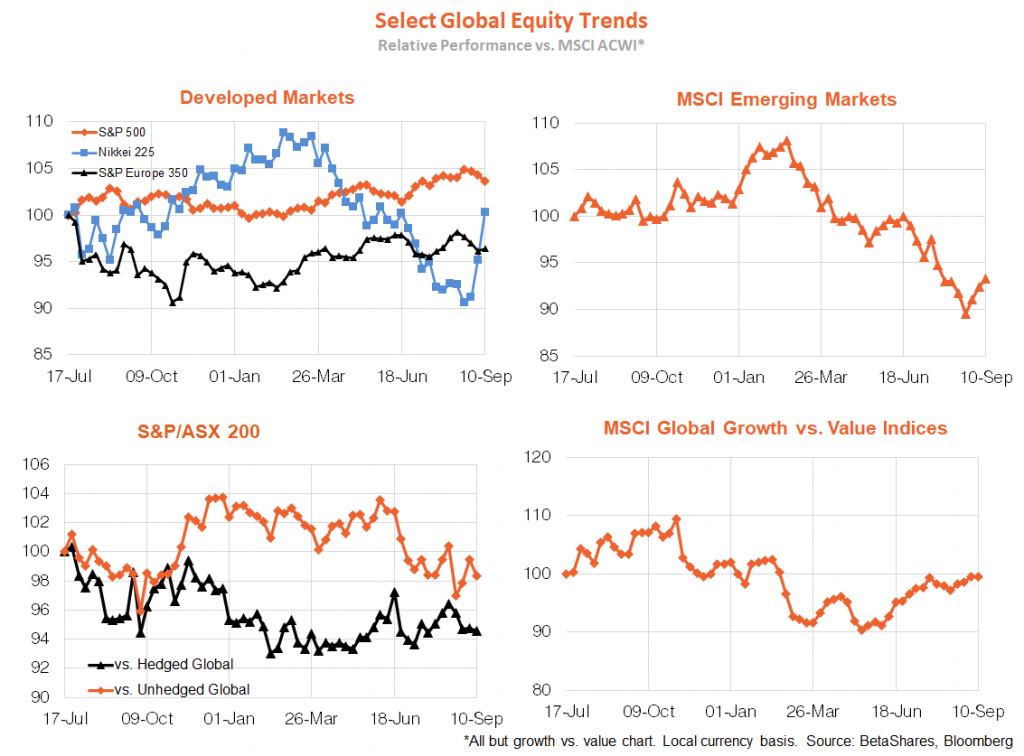 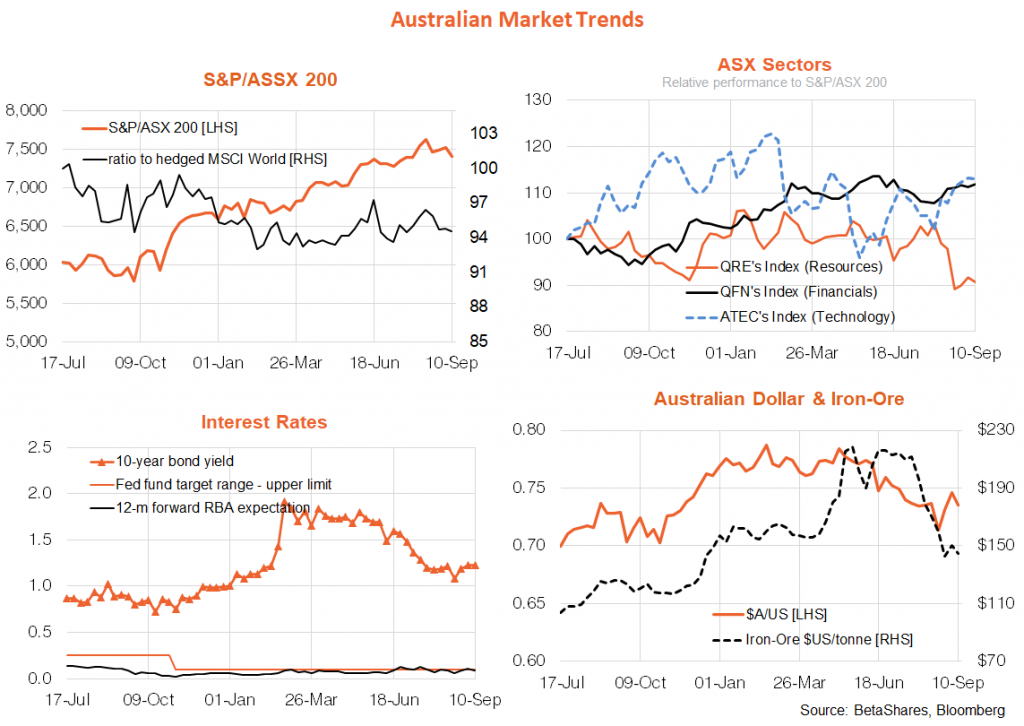