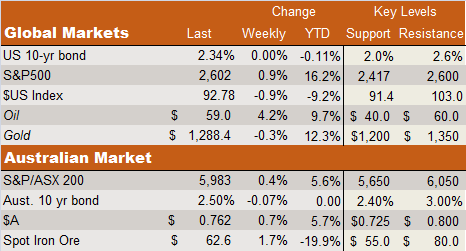 lt was a relatively calm week across global markets with few major events of note.  The quiet nature of the market reflected America’s focus on Thursday’s thanksgiving holiday, little major economic data, and postponement of further debate on US tax cuts until this week.

One major market move of note was a further lift in oil prices, reflecting US supply disruptions due to a shutdown of a Canada’s Keystone pipeline, following a spill – its second in two years.  Despite the pipeline’s stained record (excuse the pun!), regulators only recently approved plans for a second controversial pipeline, that had once been rejected by US President Obama but eagerly accepted by President Trump.   As it turns out, however, analysts are now questioning whether the second pipeline will ever be built – as the projects looks increasingly uneconomic at a sub-$US80 oil price.  Meanwhile, hopes are high among oil bulls that OPEC will agree to a production cut extension at its November 30 meeting, though this now seems largely priced into the market – while US production and exports are quietly ramping up to fill any gaps in the global market.

Locally, the key event of note was a speech by RBA Governor Lowe which, while suggesting the next move in rates would be up rather than down, also tried to hose down expectations it would be delivered anytime soon.  My view remains that RBA is on hold next year, with both growth and inflation likely to remain a little lower than the Bank is hoping to see.

A key global focus this week will be the US tax cut debate, with Senate Republicans likely to vote on their own tax cut plan as early as Thursday or Friday.  As noted last week, it’s still not a “done deal” as only two Republican Senators need to vote against the plan to kill it.  That said, whatever the plan’s merits, it seems likely they’ll all swallow hard and toe the line – or risk the intense wrath of a President that is sill popular in the Republican heartland.  One hurdle would remain: both the House and Senate then need to reconcile their different tax cut plans and vote on the resulting compromise bill, which would then likely get Trump support.  In the meantime, the slow creep to a tax cut plan is helping underpin equity market sentiment.

Locally, we’ll get a key update on the business investment outlook, with the Q3 Capital Expenditure Survey on Thursday.  Of most attention will be whether they’ll be another upgrade to the (still soft but improving) non-mining investment outlook, especially given the RBA’s growing confidence that business investment more broadly is strengthening.  The S&P/ASX 200, meanwhile, is still trying to hold its grip on the 6,000 level – good news regarding US tax cuts would help!