Better than expected U.S. economic data and stimulus hopes continued to buoy global equities last week, with the S&P 500 now only 1% from its previous peak level. The FAANG stocks have a lot to do with this performance, but even the S&P 500 equally-weighted index is now 7.5% from its previous peak level. Bond yields and the $US remained steady over the week, though gold pushed ever higher.

Both the U.S. manufacturing and non-manufacturing July sector surveys reported last week were better than expected, which likely reflects a continued flow through of the ‘re-opening bounce’. U.S. payrolls also beat market expectations, with 1.8 million further jobs restored in July. Also not to be denied, a larger than normal share of U.S. companies have managed to beat earnings expectations in Q2, after analysts slashed estimates in earlier months.

All that said, there are still around 13 million fewer Americans employed than in February, and the rate of decline in weekly jobless claims has clearly slowed. With America still battling COVID-19 (albeit with increased social distancing restrictions rather than Melbourne-style lockdown) a moderation in growth from the initial re-opening bounce is expected.

The other driver of markets last week was Washington’s stalled negotiations over extending stimulus. As it turned out, Trump ended up signing executive orders to keep some of the cash flowing on Saturday, though this now appears subject to legal challenge. Either way, given the obvious desire of both sides of politics to extend the extra unemployment benefit payments (which have now run out) a deal of some sort still seems more likely than not this week – which could be the catalyst to see the S&P 500 break out to new record highs. U.S. July retail sales on Friday will also continue to show a re-opening bounce. China’s monthly ‘data dump’ also takes place on Friday, which will likely confirm the economy’s ongoing rebound, albeit heavily driven by industrial production relative to retail sales.

In other news, Trump found time to follow through on threats to ban Chinese social media apps TikTok and WeChat. How this plays out remains highly uncertain. If this is just a one-off move, global markets will probably shrug and move on (though it does leave risks to the Chinese tech sector, especially if other countries follow). A bigger concern is if it leads to a renewed round of tit-for-tat retaliatory moves between the U.S. and China. Trump will likely remain happy to use this as a domestic political diversion – but for only as long as it does not upset Wall Street too much.

Given Melbourne’s lockdown disaster, most recent economic reports have now been consigned to the ‘old news’ basket – including last week’s June bounce in retail sales. Official estimates suggest the lockdown will slash 2.5% from Q3 economic growth, and Sydney is not yet out of the woods when it comes to new draconian restrictions. As a result, how the virus plays out in our two major states over the coming week will continue to overshadow any dated economic reports, including this Thursday’s July employment result.

Against this background, the RBA merely pledged to keep current low interest rates in place at its policy meeting last week – a promise which will start to look inadequate if a stalling in the economic rebound becomes ever more evident in the months ahead. Of course, the RBA can’t do much more – though it has hinted at the possibility of cutting rates to 0.1% (as other countries have done) if conditions worsen. It’s for this reason I still think such a move can’t be ruled out before year-end.

In the meantime, the recent weakening in the $US and ever firmer iron-ore prices have pushed up the $A. Australia’s own earnings season also rolls on this week, with a keen focus on the health of the Commonwealth Bank’s loan book and what kind of dividend it will offer when its result is released on Wednesday. 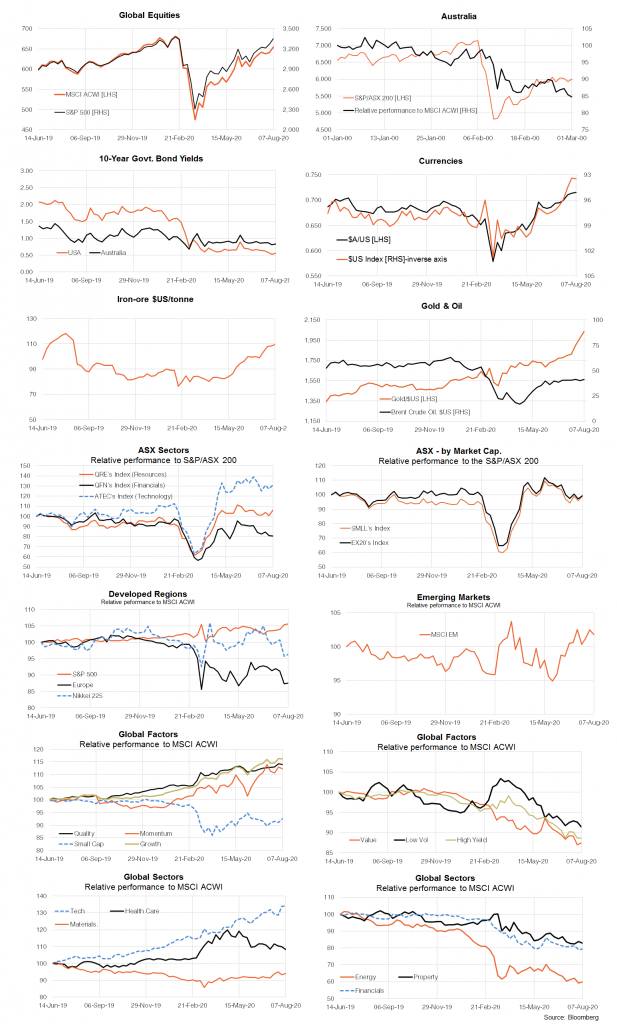