Global equities recovered somewhat last week, perhaps encouraged by the fact that while most global growth indicators have softened in recent months, they’re overall still consistent with at least moderate growth (i.e. no recession) and low inflation. Central banks are also not deaf, with the Reserve Bank of New Zealand becoming the latest to turn dovish – indicating the next move in rates would now likely be down. Bond yields continued to edge lower, with the US market now fully pricing a Fed rate cut by year-end!

Against this backdrop, one positive report last week was a better than expected improvement in Germany’s key IFO business sentiment indicator in March.  The final estimate of US Q4 annualised GDP growth was also reasonable, revealing a close-to-trend pace of 2.2%.

In Australia, the ABS official measure of job vacancies edged up 1.4% in the three-months to February – which is more encouraging than that seen recently from the monthly ANZ job ads series – suggesting there may still be some life in the labour market yet.

Global markets are likely to remain on “recession watch” this week, with key readings due on US retail sales and manufacturing activity on Monday, and the all-important March payrolls report on Friday.  But those waiting for the recession “shoe to drop” are likely to remain disappointed this week, with reasonable level of retail spending, manufacturing activity and employment growth expected.  Indeed, as I’ve long noted, one risk given the very low level of US unemployment (3.8%) will be annual growth in average hourly earnings in Friday’s payrolls report, which is expected to hold steady at 3.4%. A much higher than expected wage result could see bond yields spike higher and the benign Fed outlook thrown into question.

In Australia, focus is on “super Tuesday” when both the Federal Budget and the RBA meeting take place. While the RBA is expected to merely reiterate its “balanced risks” outlook, more interest will be on the Budget – and specifically the size and timing of any income boost to households, via tax cuts or otherwise.  With high iron ore prices producing a healthier pre-election bottom line, the Government has the economic and political justification to “go big and go households”.  While unlikely, a big enough spending splurge could throw into question the need for the RBA to cut rates later this year.  Likely soft retail sales and house prices this week will also underline the need for some form of either monetary or fiscal stimulus. 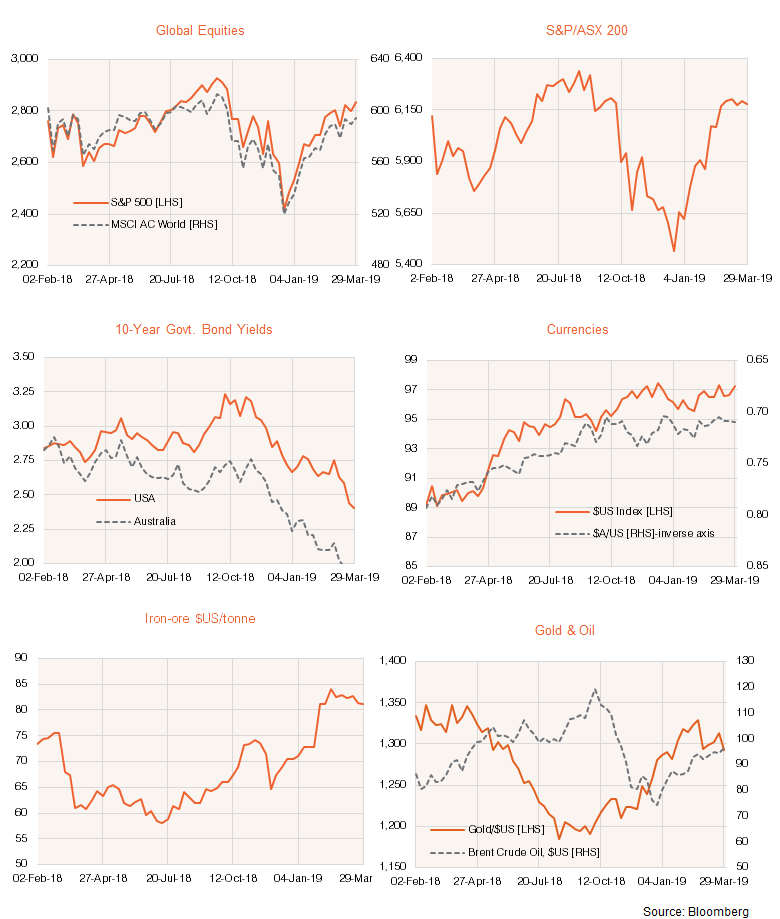