Global equities remained on the back foot last week as the previous week’s US decision to levy additional tariffs on China was quickly met with Chinese retaliation.  China’s decision to let it’s currency weaken through the “psychological” level of  7 Yuan per $1US dollar unnerved markets – as did its ban on the remaining $US10b in agricultural products it imports from the US.  The US Treasury, in turn, formally labelled China a “currency manipulator”.

Understandably, the S&P 500 slumped 3% on Monday and bond yields (and $A) sank further.  Notably amidst the mayhem, however, is the fact that gold is holding up and acting as a “safe haven.”  The $US gold price is up by 17.2% over the past twelve weeks.

That said, markets partly recovered over the week as the Yuan stabilised and China reported better than expected trade results for July.  By Friday Trump was again indicating he’s in no hurry to make a deal and markets were left uncertain whether planned trade talks next month would go ahead. Stale mate!

Importantly, however, overall global growth is still holding up at this stage, with a batch of service sector indices covering the US, UK and Europe released last week all holding above the critical “50” expansion/contraction level.  US weekly jobless claims – my favourite US recession indicator – are also still holding at very low levels.

Manufacturing indices, however, have turned negative in Europe and Asia – and we learnt last week that German industrial production slumped by 1.5% in June, thanks to slowing exports into Asia.  It now seems likely that trade-exposed Germany will report negative Q2 growth when its GDP report is released next Wednesday, though overall EU growth could still eke out a small gain.

The UK also appeared to edge closer to “technical” recession last week, with GDP dropping 0.2% in the June quarter, reflecting both an unwind of pre-cautionary pre-Brexit stock building in Q1, but also weakness in business investment.  Given we may again see precautionary stock building ahead of the new October 31 Brexit deadline – and given that the UK labour market and consumer spending are still holding up – there’s a chance Q3 UK GDP could return to positive territory, thereby avoiding “recession”.  But bleak business sentiment surveys and high lingering Brexit uncertainty suggest it could be touch and go.

Global highlights this week will be China’s monthly “data dump” on Wednesday covering areas such as retail spending, industrial production and infrastructure investment.  As is usual with these official data “estimates”, significant downside shocks seem unlikely – though they should still show a soft(ish) economy.  US economic data should also be somewhat reassuring, with benign consumer price inflation results and still firm underlying retail spending likely.

Although leaving rates steady (as widely expected) last week, the RBA reiterated its easing bias in its post-meeting policy statement and further modestly downgraded its growth outlook in Friday’s quarterly Statement on Monetary Policy. At least two further rate cuts still seem highly likely over coming months given the RBA’s forecasts imply the unemployment rate will remain uncomfortably high at around 5.25% for some time.

Local data last week was mixed, with solid exports in June thanks to high iron-ore prices (which have since fallen back) and a second successive monthly lift in ANZ Job ads. On the worrying side, however, was a nasty slump in the admittedly volatile AIG service sector survey, along with ongoing weakness in AIG’s construction sector survey.   The retailing and housing related construction sectors are clearly in a world of pain.

Note the market anticipates a lift in the unemployment rate to 5.3% – from 5.2% – this week, which will only add to pressure on the RBA to cut rates again soon.  Should unemployment rise and, say, the NAB survey also reveal a slump in business sentiment, a rate cut as early as next month would be entirely possible. 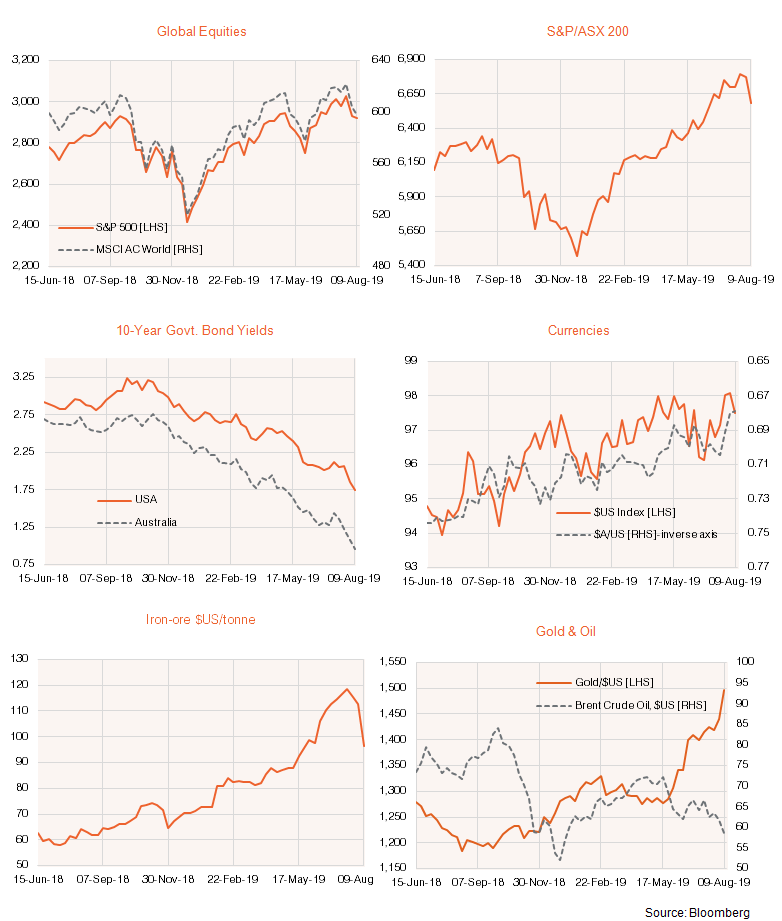