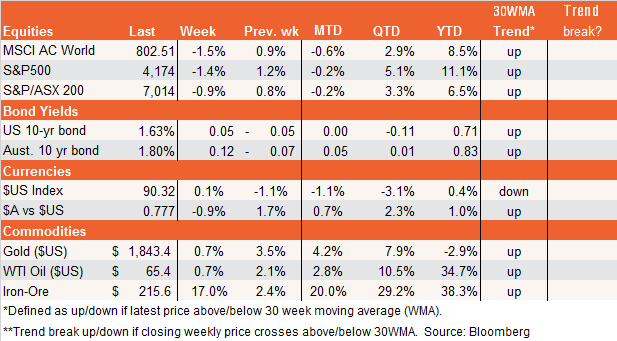 Inflation and interest rates fears caused global equities to buckle last week as commodity prices marched higher and U.S. consumer price inflation surprised on the upside. By week’s end, however, conditions had settled down somewhat – with investors prepared to back the view that the current post-COVID lift in price pressure will be transitory and should not therefore change the U.S. Federal Reserve’s dovish bias anytime soon. Of course, whether this is true remains to be seen (I think it is) but the markets are giving the U.S. economy the benefit of the doubt for now.

Of course, the major news was the U.S. CPI ‘shocker’, with core consumer prices (excluding volatile food and energy prices) rising 0.9% – well above market expectations for a 0.3% gain. Helped by base effects (i.e. price declines this time last year) the year-on-year growth in core prices jumped to 3.0%. That saw equities slump, with the tech-heavy NASDAQ-100 down 2.6% – the carnage might have been worse were it not for the fact the NASDAQ-100 had also dropped 2.6% two days earlier (did someone know something?). The market rallied back 3% over Thursday and Friday, helped by a weaker than expected U.S. retail sales result for April after the Biden-stimulus led surge in March.  China’s growing efforts to curtail strong steel prices – and steel input prices such that of iron-ore – also helped ease market inflation concerns on Friday.

Looking at the U.S. CPI detail, I suspect part of what’s happening is the fact that COVID was a common shock across all businesses – leading to higher than usual correlation in price behaviour. So just as prices across many businesses slumped during the downturn, prices are now rebounding during the upturn across a wide front. Add to that the Biden stimulus and lingering production bottlenecks, and it is the perfect recipe for a price jump. Sustained inflation, however, is a process– whereby tight labour/commodity markets lead to consumer price gains which in turn lead to even higher wages and commodity prices. In today’s competitive globalised market, I still don’t see that cycle developing.

That said, the sharp jump in core prices in April means it will now be hard for annual inflation to be sub-2% by year-end (as was my call) unless we see price declines in coming months. For example, assuming another moderately large 0.3% gain in core CPI prices in May, annual core CPI inflation would still end the year at 2.7% even if monthly gains for the rest of the year then averaged just 0.15% (1.75% annualised). At that rate, core annual inflation won’t drop below 2% until April 2022. So what matters for inflation and the Fed now is not so much the annual rate, but rather the trend in monthly price gains beyond (a likely still high) May outcome.

In terms of major global trends, it was notable that U.S. bond yields and the $US remained relatively well contained last week despite the inflation shock. Gold, however, has been rising since early March and technically has broken above its downtrend line in place since early August. 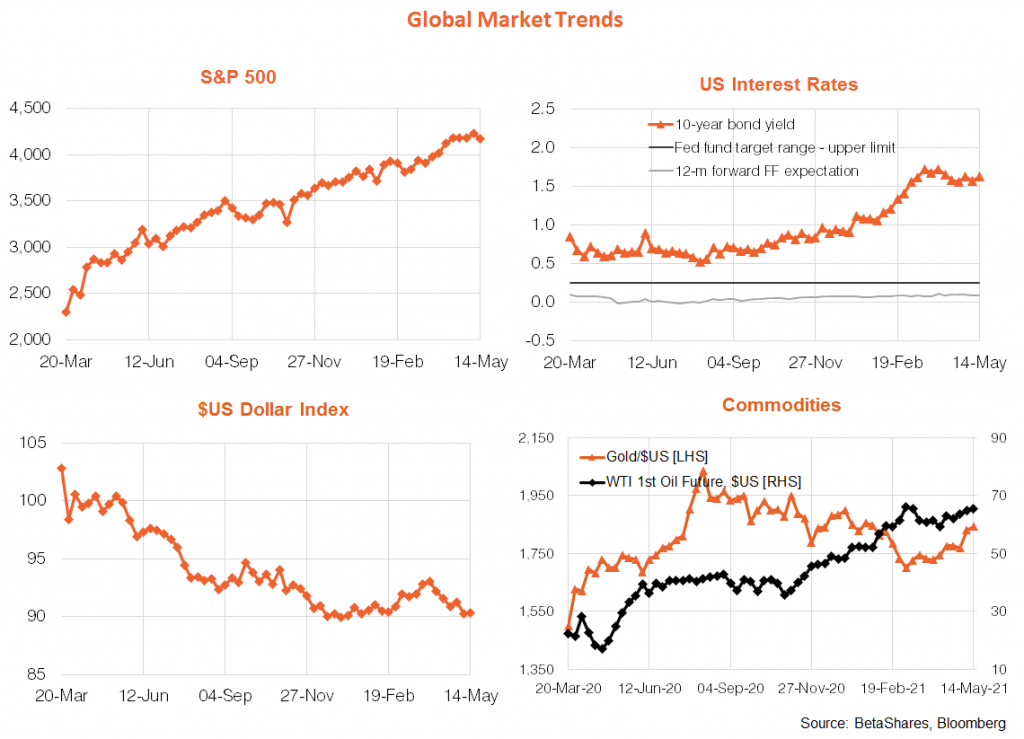 While there is a range of U.S. activity indicators this week (namely May manufacturing and services indices) these are likely to remain robust. Perhaps of more interest will be the Fed minutes, and comments from a range of Fed speakers – with markets very attentive to any hint of potential bond tapering.

Growth continued to underperform value last week, and emerging markets also remained on the nose. After good performance from late last year, Japan’s relative performance has continued to unwind as COVID has once again reappeared. The U.S. and Europe have been outperforming since mid-February. 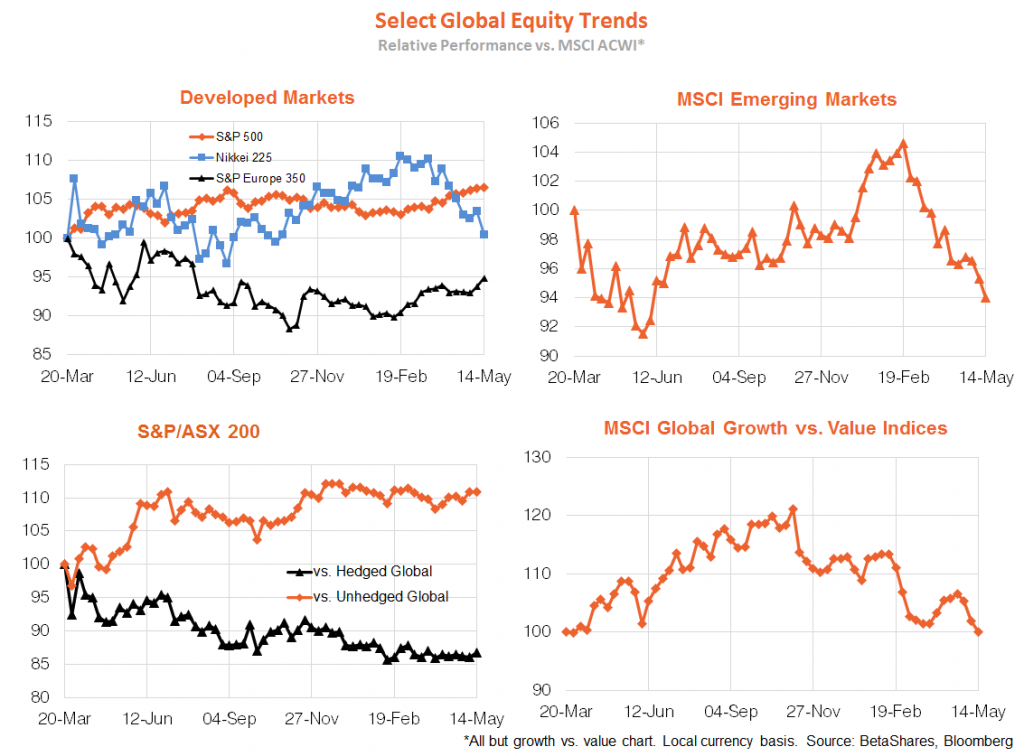 The Federal Budget was the highlight last week, and confirmation that the Morrison Government is ‘going for growth’ rather than focusing on budget repair added to the bullish growth sentiment, which in turn likely contributed to the larger upward move in local bond yields (compared to the U.S.).

As outlined in my budget comment, since the Mid-Year Budget Review the better than expected economic rebound (and high iron-ore prices) has improved the budget bottom line by around $100b over the next five years. Of that, around 92% has been spent on extending current tax and business investment benefits as well as a range of new spending in (admittedly beneficial) areas such as child, aged and disability care.

The highlight this week will be the April labour force report, with a more moderate 15k in new jobs expected which should keep the unemployment rate steady at 5.6%. If so, that won’t be a bad result considering it will be the first month since the JobKeeper program was curtailed.

In terms of trends, the $A remains remarkably steady in the face of surging iron-ore prices, while the once high-flying technology sector is coming back to earth along with the broader global rotation to value. Financials and resources, by contrast, are doing relatively well. 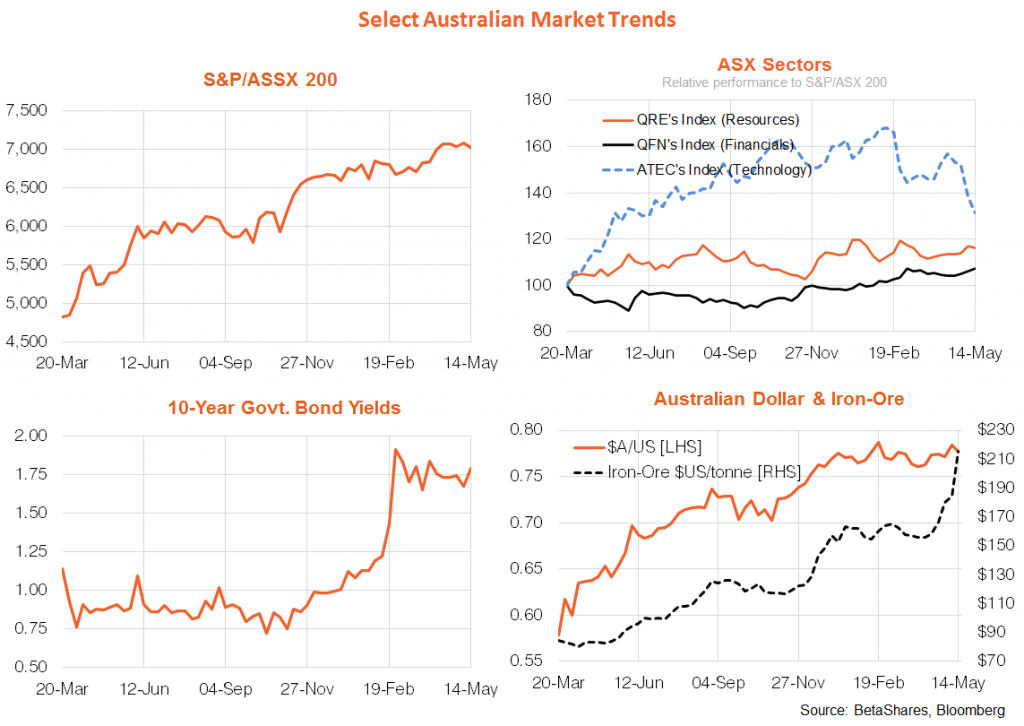