Global equities tried hard to remain positive last week even as new CV-19 cases continued to emerge in Beijing and some U.S. states. After the previous Thursday’s collapse in prices, equities bounced higher early last week following the Fed’s (rehashed) announcement that it would buy corporate bonds. Stocks also got a boost from a surprisingly strong rebound in U.S. May retail sales. That said, the inescapable evidence of rising CV-19 infection rates continued to gnaw away at stubbornly bullish sentiment, not helped by Apple’s decision on Friday to again temporarily close some retail stores in a few CV-vulnerable states.

So far at least, tough new social distancing restrictions (such as lockdowns) have not been imposed in these vulnerable U.S. States, which may give markets some hope this week – if this remains the case and/or the rate of new daily infections begins to stabilise. Of course, if the case count skyrockets and restrictions are finally imposed, one would think equities should weaken – subject to whatever reactive new stimulus announcements are then forthcoming from either the Fed or the White House.

Meanwhile, in what is now the third decent corrective move since the late-March rebound, the U.S. S&P 500 ended the week delicately poised mid-way between its recent 3,233 high on June 8 and its 2,965 low on June 15. To the bear’s dismay, the previous two corrections were resolved to the upside – it could now be a case of third time lucky. If not, new market highs potentially await – even with, thanks to the ‘Fed put’, the market trading at 22 times forward earnings!

In terms of economic data, of particular interest this week will again be Thursday’s U.S. weekly jobless claims – especially given rising concerns of a potential stalling in the rate of labour market improvement. Jobless claims only dropped to 1.51m last week (from 1.57m and compared to a market expectation of 1.3m), while internet searches for unemployment benefits have also ticked up modestly. The market is now anticipating claims will drop to 1.3 million this week instead.

US Google searches for ‘Unemployment Benefits’

Also on Thursday, the extent to which May U.S. durable goods bounce back after steep losses in April will shed some light on the likely resilience of U.S. business investment through this crisis. Given the lingering uncertainty with regard to COVID-19, a potential collapse in global business investment could undermine V-shape recovery hopes even if major second waves or lockdowns don’t materialise. Also of interest will be the Markit June surveys of manufacturing and non-manufacturing in both the U.S. and Europe – a re-opening rebound is expected albeit from very low levels – and of interest will be whether the market can bounce much on this now anticipated relatively good news.

The data highlight locally last week was the May employment report, which revealed another chunky (228k) loss in jobs. Due to the JobKeeper scheme and the strong rise in non-working Australians not actively seeking employment, however, the rise in the unemployment rate so far has been contained to 7.1% – which is probably half the true rate. RBA minutes from the last policy meeting, nonetheless, alluded to a potential shallower downturn than the Bank had previously feared, though it still fears the recovery could be gradual and fraught with risk.

Undermining local recovery hopes over the past week has been a rise in CV-19 cases in Melbourne, which will now delay a long anticipated easing in restrictions. As is the case in the U.S. and China, Australian investors will also be closely watching our own local hotspot this week – especially given little economic data of note. 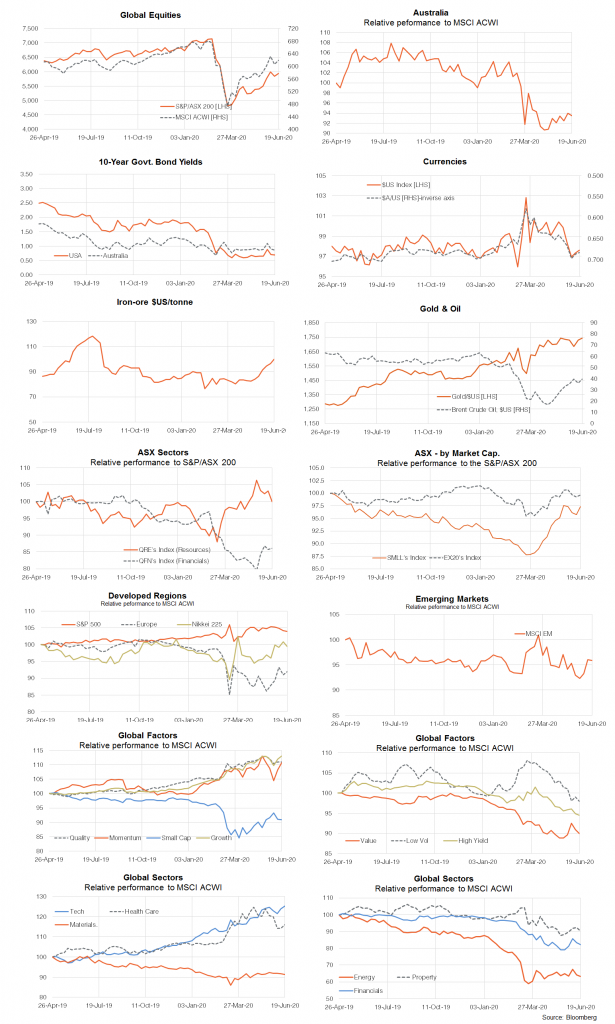