Global equities continued to remain focused on re-opening hopes last week, disregarding apocalyptic economic data from most corners of the world outside of China. The fact Wall Street could rally in the face of 20 million job losses in April, and a surge in the unemployment rate to 14%, is testament to the forward looking nature of markets. Interestingly, bond yields – unless seriously held down by central bank purchases – are not yet buying the ‘V-shaped’ recovery story, with US 10-year yields still comfortably below 1%.

As I alluded to last week, while I’m bearish (I still see a re-test of previous market lows as a 60% chance), I concede the news flow does not appear supportive of a relapse in the market anytime soon. Indeed, barring a sudden second wave CV-19 outbreak in a major economy sometime soon, we seem likely to keep basking in re-opening rays of light and even a rebound in current plunging economic data (U.S. weekly jobless claims, for example, while still shockingly high, at least appear to have peaked). And there’s still the Fed and Trump on the sidelines, prepared to throw more money at America’s problems if need be.

So why remain bearish? Because while we’ll see improvement, it still seems likely we’re only one move from our current depression to severe recession – rather than the halcyon pre-CV era – as restrictions will be only gradually removed and, either way, the CV shock will likely curtail the previous debt-fueled binge in consumer spending and share buybacks. The risk of a second wave also remains until such time as a vaccine is readily available.

Meanwhile, while at a stretch the S&P 500 could possibly be considered fair value at its current forward-PE ratio of 20 (given very low U.S. bond yields – see chart below), there’s less possible justification once a further anticipated decline in forward earnings pushes it up to around 25 later this year – even if equity prices stop rising. [Of course, I have to concede bonds yields could yet hit zero, which could push the bubble in both bonds and equities to further extremes. Indeed, it’s interesting that despite the Fed’s protestations, the market is starting to price in a negative Fed funds rate by year-end!]. 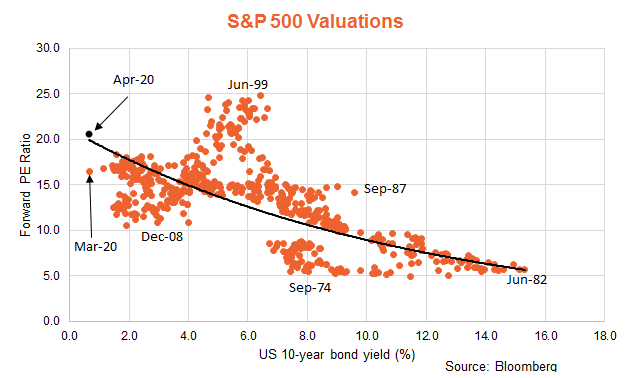 But until the data starts to settle down, and the V-shaped bubble is burst, markets could continue to push higher. The next test for the S&P 500 is whether it can break through its April 29 closing high of 2,939 (only 10 points away) and eventually break above 3,000. But the market is also starting to face key technical resistance levels around the highs of mid-2019 and the 61.8% Fibonacci.

There’s not likely to be much in terms of global economic data this week that will sway markets either way – with U.S. jobless claims and retail sales on Thursday and Friday respectively.

As a ‘risk-on’ currency, the $A has rebounded in line with equities, although – dragged down by our top-heavy financial sector – the local equity market has lagged the global recovery to date. Resources and small/mid-caps, however, have joined the global re-opening party.

If global markets remain positive, this could be the week the S&P/ASX 200 also breaks above recent resistance around 5,500! If the U.S. is anything to go by, the market seems unlikely to flinch when around 500,000 job losses and a surge in the unemployment rate to around 8% are reported in Thursday’s April labour market report. Perhaps of greater market importance will be whether either business and/or consumer sentiment rebound much, after last month’s major slumps, when NAB and Westpac measures of each are released on Tuesday and Wednesday respectively. Will our relative success in containing the virus outweigh the dire economic headlines? We’ll find out soon.