The "correction" is over - BetaShares
Home > Insights > The “correction” is over

A better than feared US earnings reporting season and continued “Goldilocks” economic reports saw Wall Street break to new market highs last week, officially classifying last year’s market slump as yet another correction in a long (albeit maturing) bull market.  While on the basis of intra-day pricing the S&P 500 Index did drop by 20.2%, it was 19.8% on a daily-close basis and only 17.5% on a weekly-close basis.  The market has recovered these losses since lows set around Christmas.

This once again demonstrates the reality that deep and sustained bear markets (i.e more than 20% declines) are hard to achieve without a US recession – and there’s certainly no sign of that anytime soon.  The clock resets.

As noted the earnings reporting season is proving a touch better than expected so far, though it’s still consistent with the first annual earnings decline since 2016 – there’s still 50% of S&P 500 companies set to report in coming weeks.  US Q1 GDP was a better than expected 3.2%, and while there was some market concern at underlying weakness in consumer spending and business investment, I’d note US retail sales appear to have bounced backed nicely in recent months and business investment was still fairly solid – albeit not as strong as Q4’s blockbuster result.  Further reassurance on inflation, moreover, came from the only muted gain in consumer prices.

US new home sales also rose nicely last week in a sign that the market is benefiting from the Fed’s about-face on interest rates. More generally, US data is once again outperforming that of laggards Europe and Japan.

In Australia, the highlight was the weaker than expected Q1 CPI result which has raised expectations the RBA could cut rates as early as next week. That’s certainly possible, though I still feel it should be signs of clearly weaker economic growth, rather than weaker inflation per se, that should require the RBA to drop rates to even further below the ludicrously low levels they already are.  Indeed, in many respects weakness in inflation reflects positive supply side forces that are helping households alleviate their often headlined “cost of living” pressures. We should rejoice – not bemoan the fact – that inflation is so low and instead reconsider whether the RBA is behind the game with an outdated inflation target.

Of course, the $A took a hit with the heightened rate cut frenzy, and would be clearly below US70c now were it not for the impressive ongoing strength in iron-ore prices.

US earnings and economic data seem likely to continue to buoy global market sentiment this week.  In particular, Friday’s US payrolls report is expected to show further healthy jobs growth (180k) and only a modest lift in annual wage inflation (from 3.2% to 3.3%). Manufacturing and non-manufacturing ISM surveys should also remain robust even as the Fed sits firmly on its hands at its next meeting on Wednesday.

Locally, RBA Watchers have a further week to wait for the RBA’s post-CPI reaction.  Meanwhile, data on house prices, home building approvals and housing finance this week will remind us that this once boom sector is now undergoing a difficult – but nonetheless necessary – adjustment. 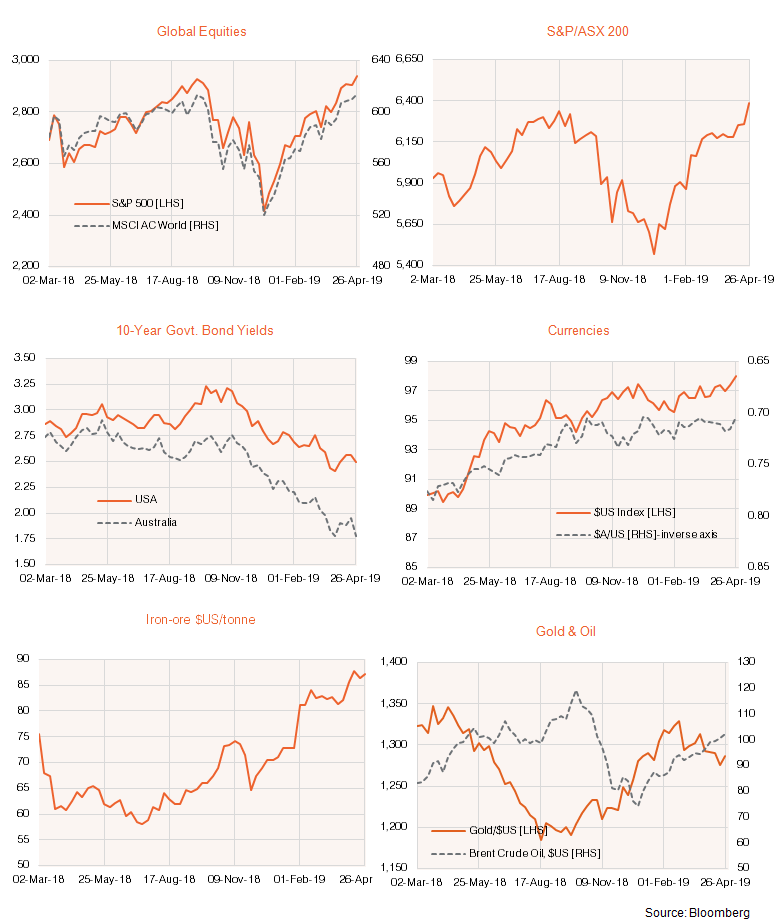