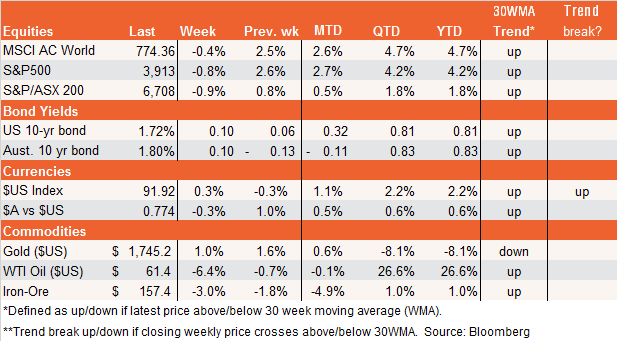 Global equities wilted under under the onslaught of further bond yield increases last week, with the Federal Reserve opting not to respond with bond supportive policy measures in last week’s meeting. Indeed, under pressure from Democrats not to water down banking regulation, the Fed announced on Friday that it would proceed with the planned end-March expiry of ‘temporary’ COVID-related capital relief, whereby banks did not need to hold capital against their Treasury holdings.

While the actual impact on bank balance sheets is estimated by most to be fairly marginal, anticipation of this decision – and associated risks around the month-end transition – has potentially contributed to the rise in bond yields in recent weeks. The Fed has, however, indicated that capital provisions remain under review, and is keen to avoid any market strains as a result of huge ongoing issuance to fund America’s now enormous budget deficit.

In terms of the Fed’s ‘dot plot’, it was notable that seven Fed members now envisage a rate increase in 2023 – up from only five back in January. Of course, only 12 of the 18 members who contribute to the dot plot actually vote, and we don’t know who is behind each of the dots! Word on the street is the Fed is thinking of ditching the dot plot as it risks creating confusion (especially if, as could be possible, a majority soon pencil in a rate rise in 2023 even though Powell publicly argues otherwise). Watch this space.

Last week’s U.S. economic data, for a change, was also on the soft side – reflecting challenging winter weather in February and lingering COVID-related restrictions in some cities. Retail sales and industrial production were both weaker than expected, and weekly jobless claims ticked up rather than down.

In other news, there were more reports of greater Chinese scrutiny of its leading tech firms, which along with the broader global rotation from growth to value stocks has hurt the Chinese tech sector in recent weeks. BetaShares’ Asia technology ETF (ASIA) ended Friday 14% off its recent peak on 15 February. That compares with an 11% correction in the Betashares currency-hedged NASDAQ-1oo Index (HNDQ) from 16 February to 8 March, though the recent rebound now has the ETF only down 7% from its recent high. Meanwhile, the Betashares Global Banks ETF (BNKS) has lifted 10% from 16 February thanks to rising long-term bond yields (which helps net profit margins) and the global value rotation.

Indeed, perhaps surprisingly, the overall global equity market has held up reasonably well in recent weeks despite the steep lift in bond yields – rather what we’ve seen is a rotation between sectors.

There’s little in the way of major global data this week though U.S. Fed chair Powell will speak several times. On one occasion he’ll be accompanied by Treasury Secretary Janet Yellen when the pair confront Congress. While both are likely to downplay the risk of inflation, and to promise to keep policy very expansionary, markets may instead focus on the extent to which either expresses any concern with the rise in bond yields. A lack of concern potentially could see bond yields rise further. On Friday, the U.S. consumer price deflator is released for February – while it’s likely to show contained inflation (the jump due to base effects will happen next month), markets will be attentive to any upward surprise.

In terms of global trends, the overall S&P 500 Index continues to broadly tread water despite the lift in bond yields. The U.S. dollar, meanwhile, appears to be firming somewhat – as is the gold price – which could reflect broader investor caution. That’s also consistent with a pullback in oil prices in the past two weeks. 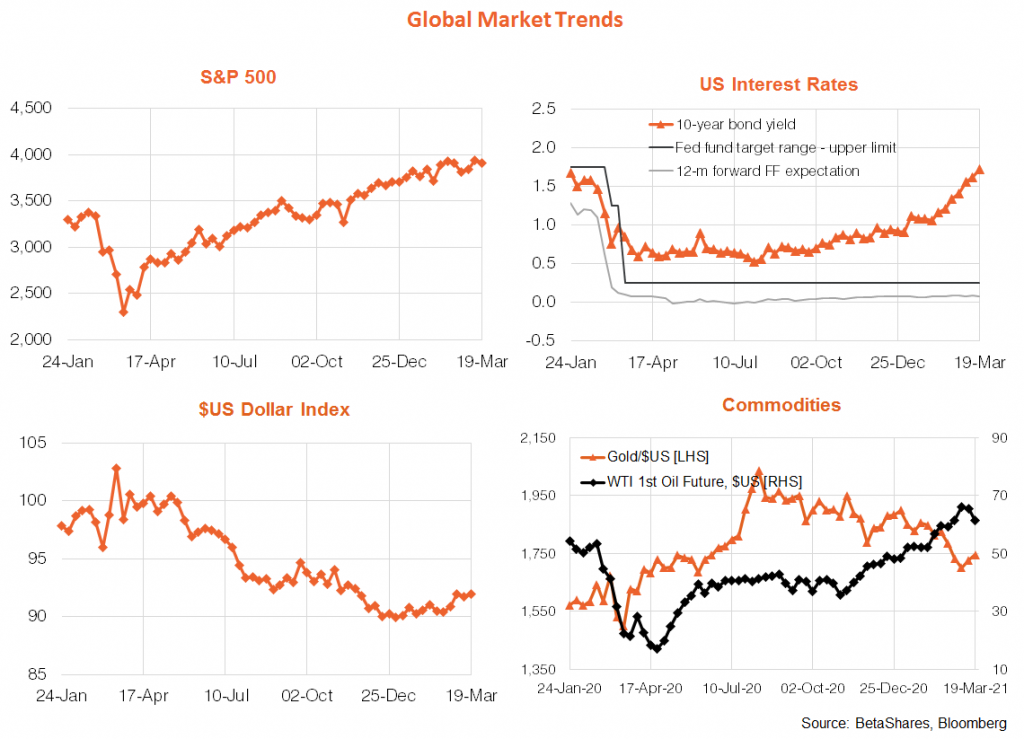 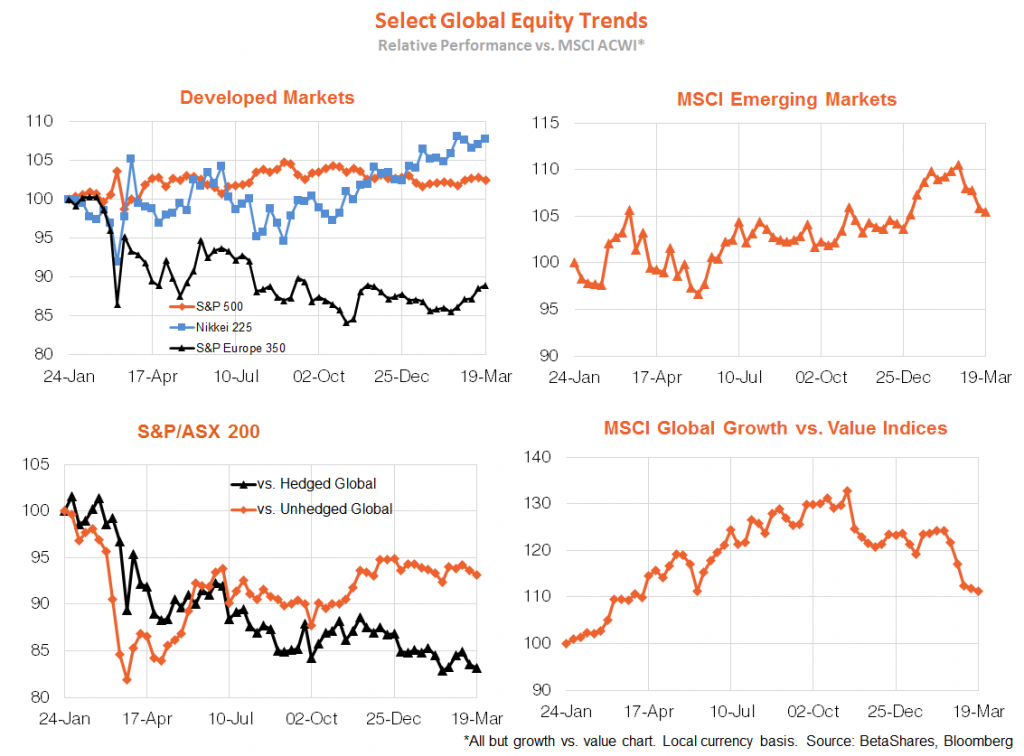 The obvious local highlight last week was the blow away labour market report, with a further 90k jobs gained in February and the unemployment rate plummeting to 5.8% from 6.3%. The value-orientated financial sector is also holding up well relative to growth (e.g. technology), while resources have eased back in line with a pullback in iron-ore prices. 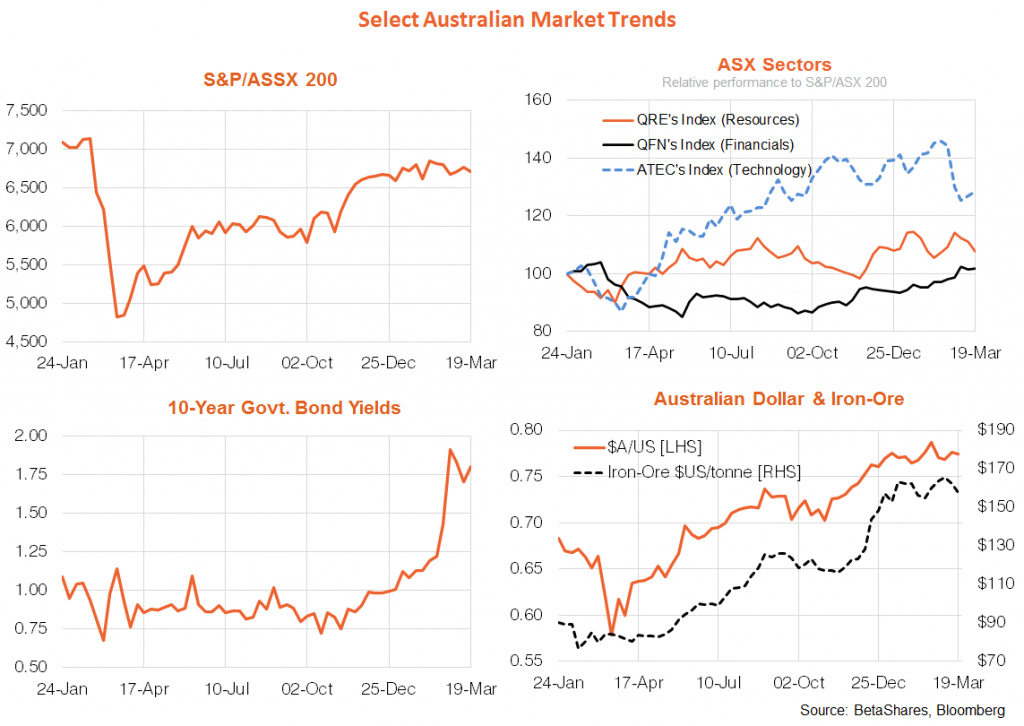 Despite the much stronger than expected run of local economic data, the Reserve Bank remains steadfast in suggesting it won’t need to raise interest rates until 2024. To my mind, however, the market is right to at least question this commitment, given the unemployment rate now appears likely to hit – much earlier than expected – the level where the RBA expected wage growth to eventually lift.

As recently as the August Statement on Monetary Policy, for example, the RBA was still anticipating the unemployment rate would not drop below 6% until at least 2023! Unless it anticipates the labour market will stop improving sometime soon, or the Phillips curve has suddenly flattened, it is not consistent (credible?) to keep the same policy commitment in the face of a rapidly changing outlook. 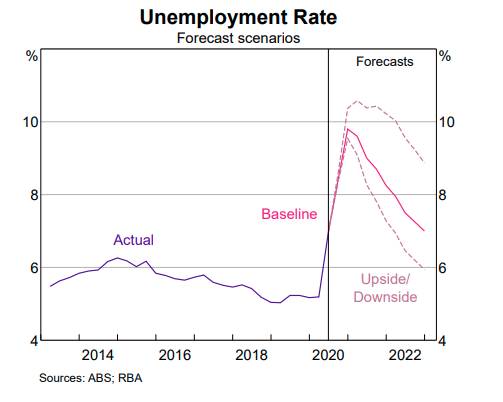 It should be a very quiet week locally, with no major data releases or Reserve Bank commentary. It will be a week of watching global developments, especially the trend in bond yields.