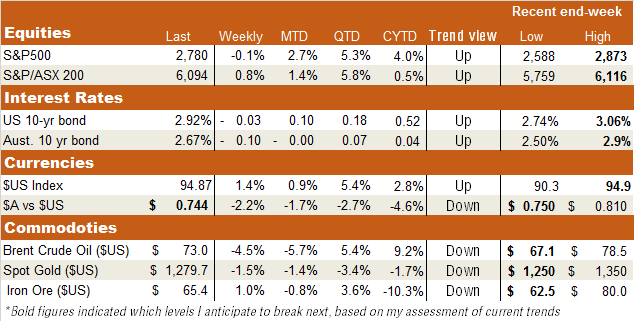 It was a generally soggy week for global equities thanks to Trump’s renewed trade war with China and a hawkish Fed Reserve meeting.  While the S&P 500 was flat last week, however, the tech heavy NASDAQ-100 rose 1.4% and continued to push to new record highs.  US tech has been a favourite of mine for some time, as evident most recently here.

As expected, the US-North Korea summit came and went with little lasting market impact – as negotiations are likely to drag on for some time.  Instead, the real highlight was the Fed’s “dot points” which now suggest America’s central bank is thinking of two further rate rises this year instead of only one.  This knocked stocks but pushed up the $US, weakening commodity prices (including gold) and emerging markets in its wake.  The $A also dropped, ending at its lowest weekly close since June 2017.  Trump’s decision to impose US $50 billion worth of tariffs on Chinese imports – and China’s quick retaliation – initially hurt US stocks on Friday, though they largely recovered as traders concluded this was just another negotiating tactic. 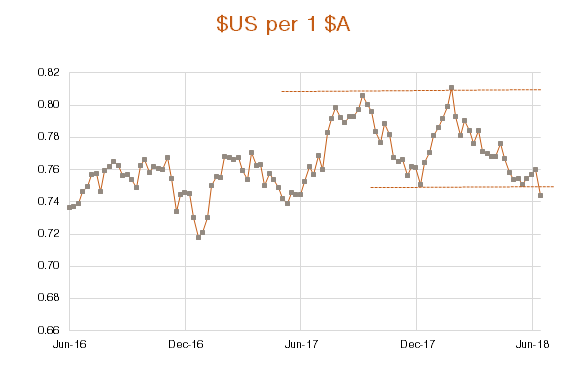 Adding to the $US’s strength was the European Central Bank’s policy meeting, which while confirming that the ECB’s bond buying program would end in December, also seemed to push out the timing of its first rate rise until Q4′ 2019.  Although US economic data remains strong, EU growth indicators have slowed so far this year which together with Italian jitters has left the ECB even more cautious about tightening policy. China’s monthly “data dump” was also on the soft side, with slowing industrial production and retail sales growth, which helped keep iron ore prices subdued.

In Australia, meanwhile, RBA Governor Lowe continued to bemoan our weak pace of wage growth and indicated rates are likely to remain on hold for some time. The RBA is likely quite happy to see the $A weakening as commodity prices soften and our interest-rate differential with the US narrows further.  Economic data was mixed: although the NAB Index of business conditions dropped, it remained at a high level, while home lending and employment growth continued to ease.

It’s a relatively light week in terms of economic data, suggesting US President Trump’s trade tactics could be a focus of investor attention. Any further escalation in the “war of words” between China and the US could be taken negatively by the markets.  Ironically, such a “risk off” move could be further $US supportive, though further undermine the $A.

Locally, the ABS is likely to confirm on Tuesday what Core-Logic monthly data has already revealed – namely house prices went backwards in the March quarter, thanks especially to weakness in the Sydney market.