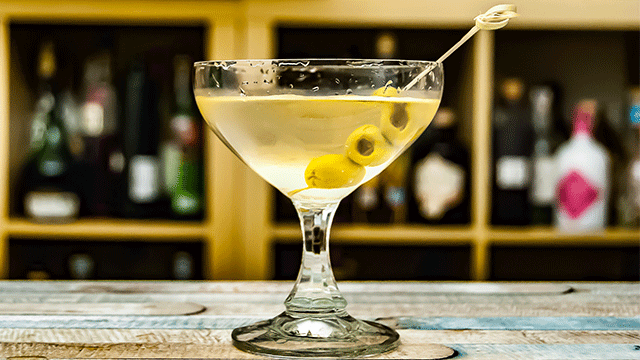 The current equity market slump, including ‘Shocktober”, has once again shown the value that bonds can play in investors’ portfolios in terms of offering some downside protection. While this may be obvious to some, what is perhaps less obvious is that compared to the traditional benchmark bond indices which are generally heavily weighted to low-yielding government bonds, some longer-duration and higher yielding corporate bond exposures have historically managed to offer even better protective benefits in these periods, whilst still offering greater income returns over time.

Fixed-Rate Bonds: The benefits of negative correlation with equities

One of the attractive features of owning fixed-rate bonds is that they generally tend to do best when equity markets are doing poorly, i.e. the returns of these two major asset classes tend to be negatively correlated.  The reason is that, as seen in the chart below, equity markets tend to be weak when the economy and corporate earnings are weak, which also tend to be periods when interest rates decline – due to reduced demand for credit and interest rates cuts from central banks. Declining interest rates, in turn, tend to boost the market value of fixed-rate bonds because the future stream of constant nominal income payments they offer are worth more in today’s dollars.  The longer the term-to-maturity or “duration” of a bond, moreover, the greater its future stream of income payments, and hence the greater sensitivity of its market price to interest rate changes. 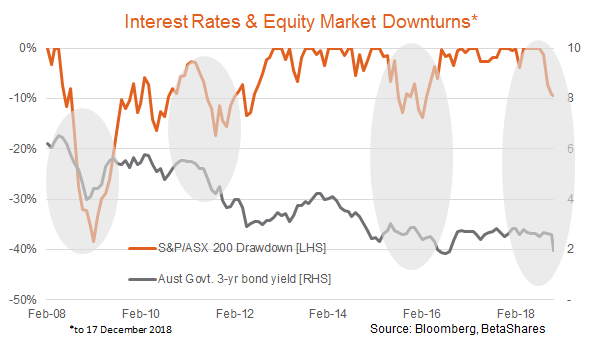 Indeed, as seen in the chart below, the Bloomberg AusBond Composite Index (BACI) – one of Australia’s most widely followed benchmark bond indices – has produced positive returns during each of the recent periods of equity market decline.   The BACI is weighted by bond issuance in the Australian market, and accordingly tends to be heavily weighted to Government bonds.  As at end-October 2018, the BACI had 90% exposure to government or government related bonds, an overall “duration” of 5.2 years and offered a yield-to-maturity of 2.5%. 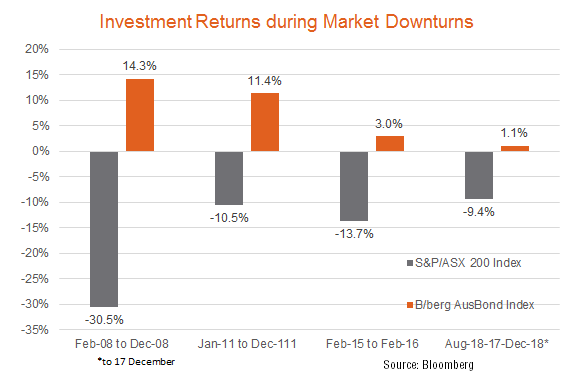 Due to their higher risk of default, corporate bonds – issued by some of Australia’s leading companies – tend to offer higher yields and income returns than Government bonds over time.  Reflecting these risks, as seen in the chart below, the yields on government bonds tend to fall relative to those of corporate bonds (for a given duration) during equity market downturns, i.e. “credit spreads” widen.  Indeed, interest rates on some higher risk corporate bonds can even increase during equity market downturns if widening credit spreads more than outweigh a broader decline in market interest rates. 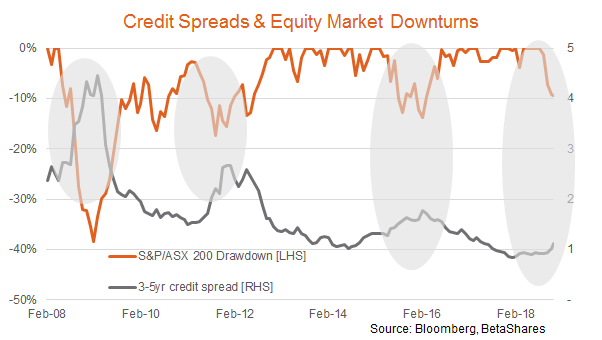 That said, as seen in the chart below, the Index of reasonably high quality long-duration Australian corporate bonds – that the BetaShares Australian Investment Grade Corporate Bond ETF (ASX Code: CRED) aims to track has nonetheless demonstrated a capacity to not only hold up well in value during recent equity market downturns, but even often outperformed the returns from the widely followed BACI. 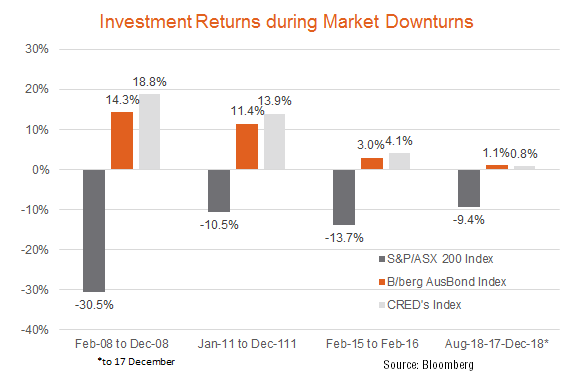 In fact, the Index of corporate bonds which the CRED ETF aims to track produced returns of 18.8% during the depths of the global financial crisis, outperforming the 14.3% return from the BACI. CRED’s Index also modestly outperformed during the downturns of 2011, 2015-16 and has produced a similar return during the more recent equity downturn in recent months.

Why has CRED’s Index performed well compared to the BACI in equity market downturns, despite widening credit spreads?

What’s more, CRED’s Index specifically targets relatively long duration bonds whose capital value, as noted above, should benefit most from the decline in interest rates typically associated with equity market downturns.  As at end-October 2018, for example, CRED’s Index had an average duration of 6.3 years, or just over one year longer than the BACI Index.

The potential negative impact of widening credit spreads, moreover, is sought to be limited by the fact that only corporate bonds meeting minimum liquidity and credit rating hurdles can be included in CRED’s Index. All bonds must have a minimum investment grade credit rating and have at least $250m issuance outstanding.

Note also that, unlike CRED’s Index – which specifically targets only corporate bonds of minimum credit rating and term-to-maturity – the duration and credit exposure (and hence performance over cycles) of the BACI can vary over time depending on the nature of issuance by Government and corporate entities.

All up, given the potentially attractive income and diversification features of the CRED ETF, it may be worthy of consideration not just as a niche corporate bond exposure within multi-asset portfolios, but potentially as a core bond exposure in its own right.

Compared to the BACI, CRED’s Index has tended to offer better income over time and downside protection during equity market downturns that is at least as good and often better.

Unlike the BACI, moreover, CRED’s Index also targets a specific credit and duration exposure within the bond market, meaning its composition and performance over economic cycles aims to be  relatively more stable.

*Roll return is profit derived from the process of maintaining a target average duration for bonds within a portfolio, with estimated one-year return potential based on the assumption of an unchanged and upward sloping yield curve over the following twelve months.  Profit is earned because at longer durations, a bonds’ capital price tends to initially rise as it’s term to maturity begins to shorten.  As a result, a strategy of buying, say, 10 year bonds and selling after their remaining term to maturity has shortened to 5 years (and replacing them with new bonds with 10-years to maturity) will tend to produce a profit on these sales, which can be distributed back to investors as extra income each year.