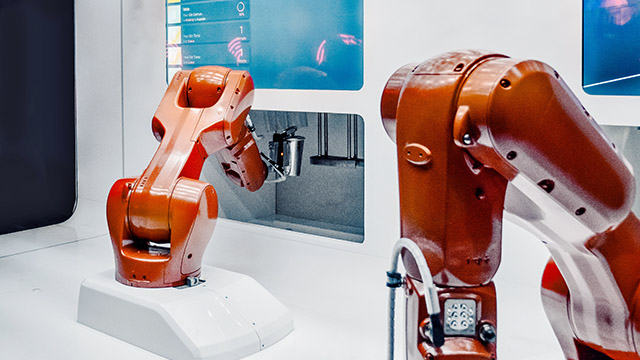 We are becoming more accustomed to the presence of robots in our daily lives, whether that be through automated vacuums or the involvement of robots in completing our online shopping purchases – robots are moving to the mainstream. However, have you thought about how they are shaping the way we work?

Given ageing demographics, robots are becoming an increasingly vital cog in the global supply chain, replacing simple manpower with supercharged robotic productivity. Robots are beginning to enhance and replace the labour force in developed industries all over the world – “a megatrend that is transforming the economics of manufacturing and reshaping the business landscape”.1

The scope of the investment wave in robotics is enormous – total spend on robotics worldwide is predicted to jump from $26.9 billion in 2015 to approximately $67 billion by 20252 (see chart below). Driving the growth in this sector is a combination of falling prices and performance improvements – allowing robots to do traditionally manual work, at a much lower cost and in a more efficient manner. The cost of precision robots and components is dropping rapidly, whilst the chips that run the robots are getting faster. “As robots become cheaper, smaller, and more energy efficient, they gain flexibility and finesse, increasing the breadth of potential applications”.3 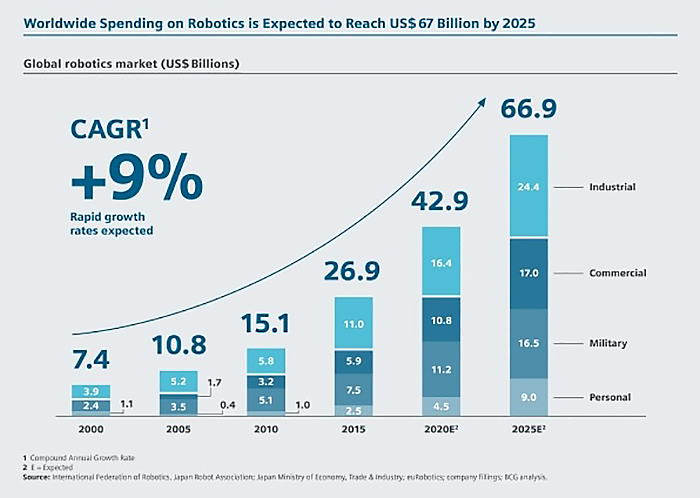 Changing worldwide demographics are another key factor driving growth in the sector.

According to the United Nations, the world’s population continues to age at an unprecedented rate, creating labour supply concerns for the world economy. The global population aged 60 years or over numbered 962 million in 2017, more than twice as large as in 1980 when there were 382 million older persons worldwide. The number of older persons is expected to double again by 2050, when it is projected to reach nearly 2.1 billion.4

Interestingly, it is established economies such as China, Germany, Japan and South Korea5 considered likely to suffer the most from ageing populations, posing a threat to their competitiveness in the global marketplace. Given this trend, the scope for the robotics sector to increase global production, whilst circumventing the need for traditional labour inputs, begins to look very promising. Economies that can produce goods cheaper and more efficiently, without needing to increase the workforce, will likely prosper.

The chart below shows that countries with a greater reliance on ageing workers are adopting industrial automation via robotics at much faster rates.

Researchers find that countries that are undergoing rapid population ageing (meaning that they are experiencing a greater proportional decrease in the number of middle-aged workers relative to older workers) invest significantly more in robotics throughout the supply chain. They are more likely to develop new technologies and manufacture robots, and to deploy these robots into production.6 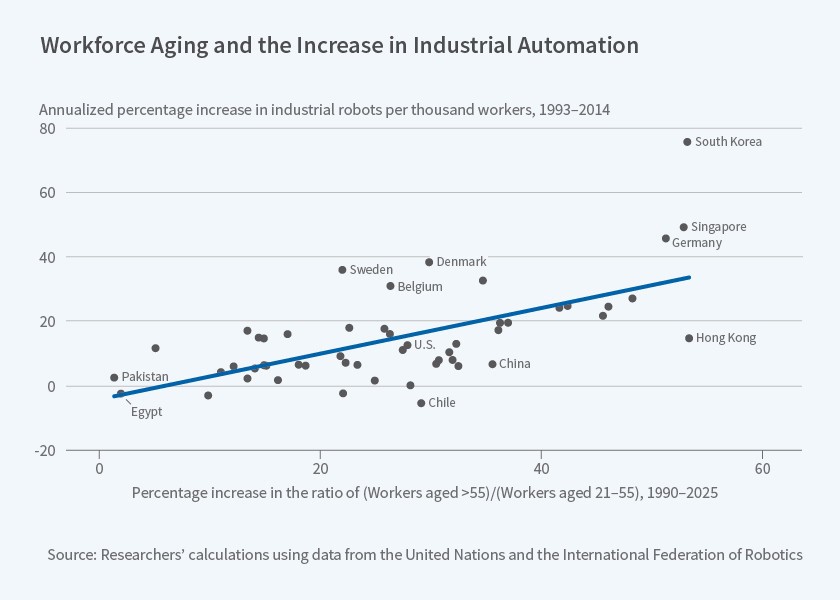 Given that ageing demographics and cost pressures are replicated the world over, it is easy to see the growth potential for the robotics sector on a global scale. As populations continue to age, growth in the supply chain is going to rely heavily on robotics to fill labour shortages and usher in a new era in the global workforce.

With growth of 15.34% this year to date, RBTZ shows that the robotics thematic offers investors plenty of potential for growth.7

RBTZ provides simple and cost-effective exposure to the leading companies expected to benefit from the increased adoption and utilisation of Robotics and A.I. The Fund invests in companies involved in Industrial Robotics and Automation, Non-Industrial Robots, Artificial Intelligence and Autonomous Vehicles and Drones, and offers a convenient way for investor to gain access to what could be a transformational technological megatrend.