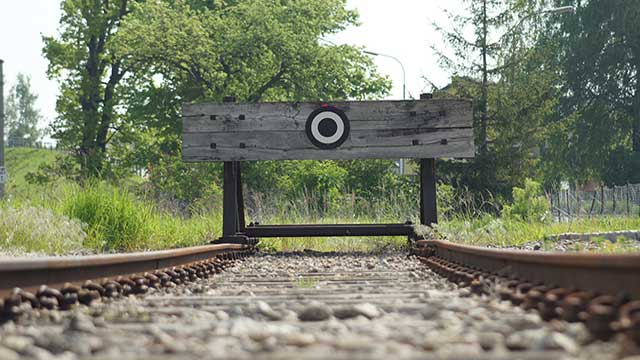 Investing success is often not just about picking the right asset class or securities – but also avoiding the poor investments.  In the current global economic environment, out of the world’s major asset classes, it’s hard to go past global bonds as having potentially the lowest likely return over the next year or so. Let me explain why…

The rally in risk markets since the global financial crisis has benefited from a major tailwind – extraordinary monetary stimulus from central bankers who, despite the recovery in global economic growth and employment, have remained resolutely accommodating so as to try and lift still unusually low rates of inflation.

As seen in the chart below, this has led to a decline in global bond yields – as represented by the prevailing yield on the Bloomberg Barclays Global Aggregate Bond Index – all through the post-crisis global equity rally so far.  As it stands, the yield on the benchmark global bond index is now only around 1.6% p.a.  In turn, this reflects very low bond yields around the world, with the yield on US, German and Japanese 10-year government bonds presently around 2.3%, 0.4% and 0% respectively. 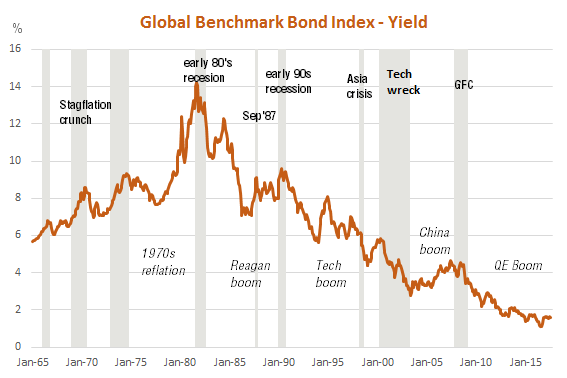 What’s more, given this bond index is comprised of fixed-rate bonds (both government and corporate), the low yield means that even if interest rates don’t change further, the best annual return one could hope for from this Index (which is an important component of most diversified investment portfolios around the world) is around 1.6% p.a!  That’s not much compensation for the rate of inflation or for the volatility in capital returns on fixed-rate bonds as interest rates fluctuate over time.

What’s more, depending on the period over which this Index is held and the speed of the change in market interest rates, returns may be even lower than 1.6% p.a. should, as seems likely, global bond yields eventually return to more normal levels.

As we have previously explained, the capital value or “price” of fixed-rate bonds moves inversely with movements in the level of interest rates.  This sensitivity is greater, moreover, the longer the duration of the bonds in question. In the case of the Bloomberg Barclays Global Aggregate Bond Index, the average term-to-maturity of the bonds it contains is relatively long (around 7 to 10 years), such that a 1% general rise in interest rates is estimated to produce a 7% decline in capital values over the period in which the rise in yields takes place (and vice versa).

Indeed, the ongoing decline in bond yields since the bottom of global equity markets in early 2009 has delivered investors, up until end-September 2017 – a handy 7% p.a. return as measured by the global benchmark bond index. But while global central banks have been a boon to bond holders over recent years, the reverse is likely to be case over the next few years. Already the US Federal Reserve has started lifting official interest rates and will begin net-reductions in its substantial bond holdings this month.  The European Central Bank is also inching toward policy tightening, and is likely to announce in the next month or so a reduction in its bond buying program for 2018.

By way of example, should the yield on the Bloomberg Barclays benchmark global bond index rise from say 1.6% p.a. to 2.6% p.a. over a given year, the implied total return from the Index (ignoring hedging costs) would be negative 5.4% (1.6% income return, less 7% loss in capital value).  Even if such a rise in yields were to take place over two years, it would still imply negative annual returns over this period of around 2% p.a.

In short, when and if global bond yields start to rise, investors in the global bonds benchmark index should expect negative returns for a time. At the very least, given the ongoing recovery in global economic growth and corporate earnings, and the fact the Reserve Bank will likely lag other central banks in tightening monetary policy, global bonds may well under perform other major asset classes such as local bonds, global and local equities and even many commodities over the next year or so.

Accordingly, at least in terms of major asset classes, in my view global bonds are currently potentially one of world’s worst investments.

Given that local bond yields also tend to closely track global rates, a rising bond yield environment would also not be great news for the Australian fixed-rate benchmark bond index – even if the Reserve Bank resists following other central banks in tightening policy over the coming year.  While the local Bloomberg AusBond Composite Bond Index might outperform the global benchmark, returns would still likely be quite low, and even potentially negative for a time. Indeed, in the year to end-September already, this Index produced a negative 0.7% return – due to a rise in its average yield from 2% to 2.6%.

Against this backdrop, as we’ve previously outlined, in this environment the BetaShares QPON ETF appears well placed to deliver a potentially better risk-return outcome than funds which aim to track the widely followed AusBond Composite Index. After all, due to the floating rate nature of its bond investments, not only will QPON benefit from higher interest payments as and when the RBA lifts the cash rate, it should also not suffer the extent of potential capital losses the Bloomberg AusBond Composite Index will be exposed to as bond yields rise.