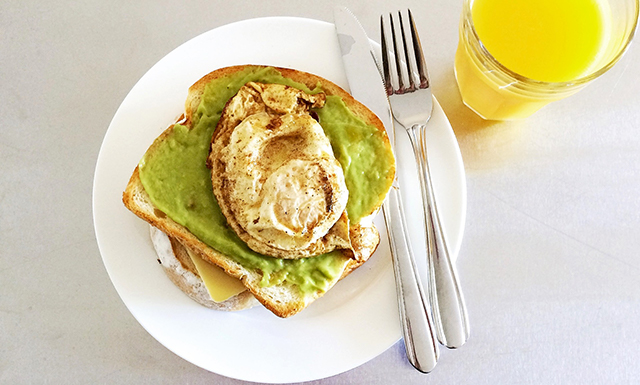 Media commentary has been dominated in recent weeks by talk of Australia’s growing “housing bubble.” This note attempts to provide a factual perspective. It suggests that while Sydney house prices are now starting to reach past peaks in terms of mortgage (un)affordability, they are still a little below their average long-run premium to national house prices. In other states, moreover, house prices valuations are far from extreme.

As seen in the chart below, the national house price-to-income ratio* has risen strongly in recent years to be now well above the past peaks in 2004, 2007 and 2010.  In a sense, therefore, this could be considered a “bubble”. That said, it is also apparent that mortgage interest rates are now notably lower than they were in past house cycles, such that mortgage (un)affordability** is still below the peaks in 2007 and 2010, and only broadly in line with the peak in 2004.   All this suggests it is still interest rates that largely account for the lift in house prices nationwide – rather than fancy new theories associated with tax distortions, foreign purchasers or self-managed super funds (SMSFs). 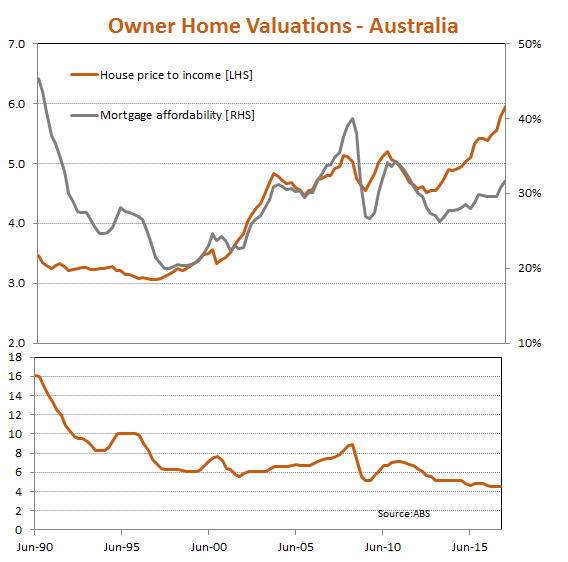 There is no such thing as a “national” housing market

The chart below details house price affordability trends across Australia’s eight major capital cities. It should be noted that the cyclical swings in house price-to-income ratios tend to be quite disparate across these cities over time. Each city dances to the beat of its own drum.  That said, house prices relative to income lifted across all cities since the mid-1990s, due to the structural decline in national mortgage interest rates. Beyond this national factor, the role of mining boom and bust is also evident.

As seen, it is only in Sydney that mortgage (un)affordability has now reached past historical peaks. Of course, given the decline in mortgage interests rates, this affordability limit has now been reached at a much higher house price-to-income ratio than seen in the past. 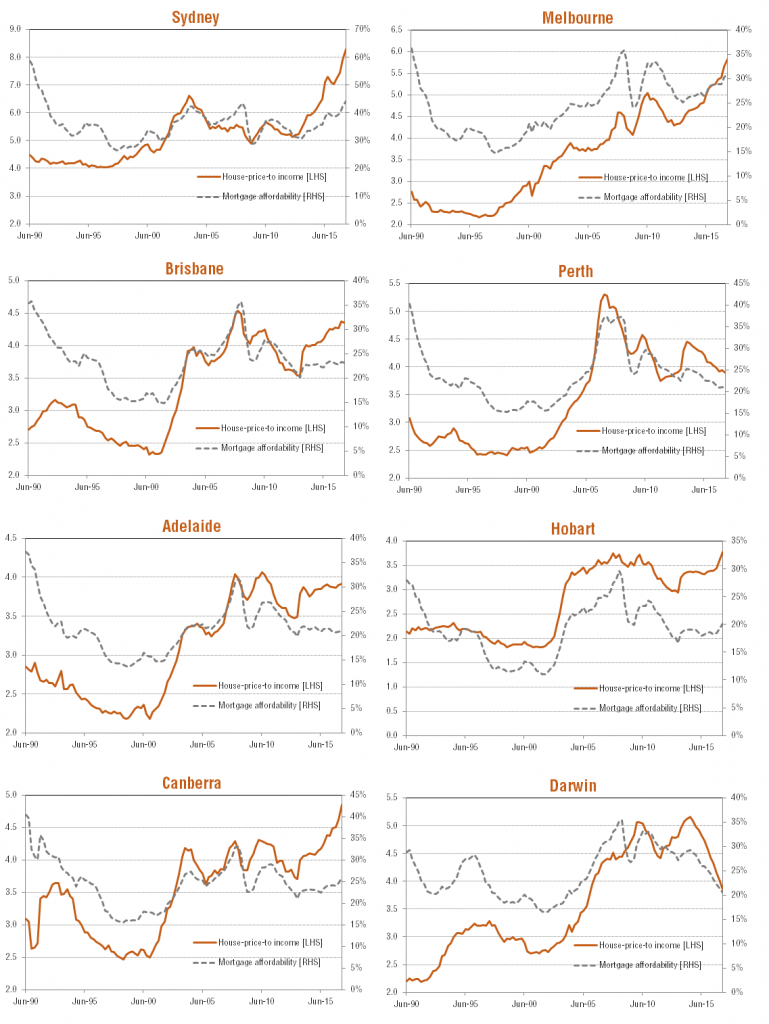 House price-to-income ratios are also above the past peaks in Melbourne, Canberra and Hobart and (perhaps surprisingly) also not far from previous peaks in Adelaide and Brisbane.  Note house price-to-income ratios remains well below past peak levels in Perth and Darwin – though their previous peaks seemingly reflect of true “bubble” conditions at the height of the mining investment boom. Importantly, however, in all cities outside of Sydney, mortgage (un)affordability remains comfortably below past peaks – and in many cases broadly in line with (and even lower than) the average over the past decade or so. 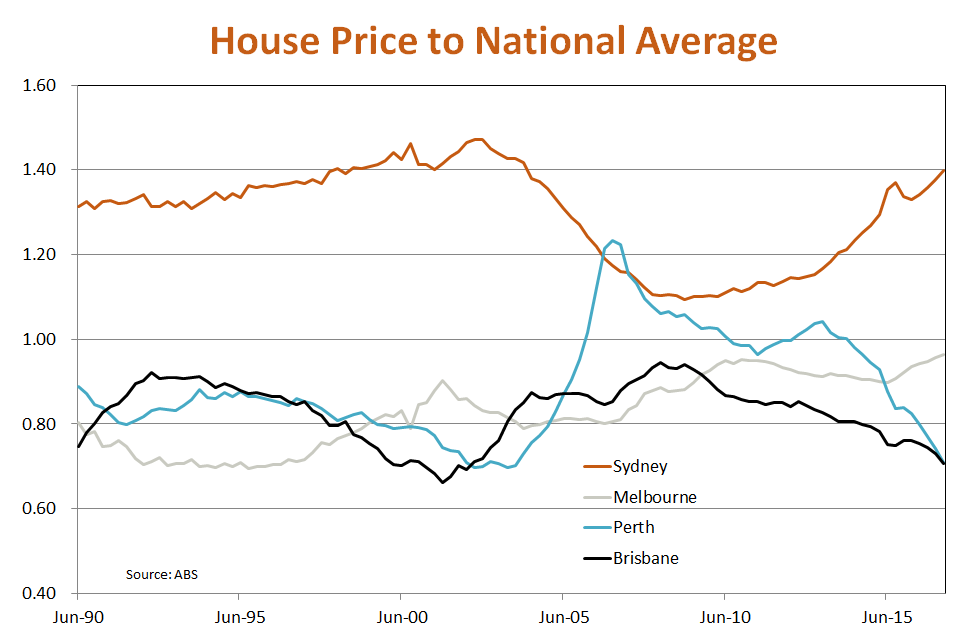 Of course, with the strong rise in Sydney house prices, there is growing talk of an eventual price “collapse”.  As seen in the chart below,  however, nominal declines in Sydney house prices are not unusual – and have historically usually coincided with rising mortgage rates and mortgage (un)affordability near current levels.   That suggests that when mortgage rates do eventually rise in earnest, another period of nominal Sydney house price declines could follow. That said, the largest correction in recent years was between 2003 to 2006, though even this was a fairly moderate 9.5%, which did little to threaten the nation’s financial stability. 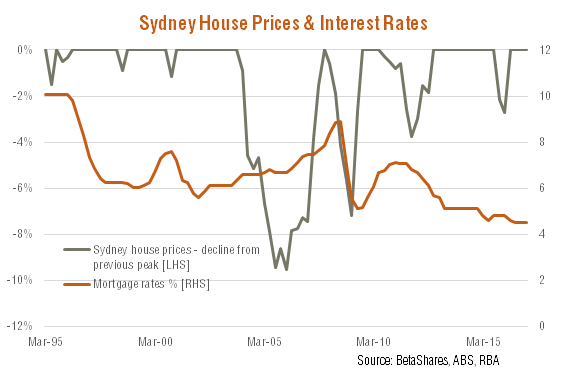 Note, moreover, that the level of Australian house prices to household income is not that unusual by global standards – especially as compared to other smaller countries with populations highly concentrated in only one or two major cities. The real outlier – though a country we most often compare ourselves to – is the United States, where high population dispersion across a multitude of medium-sized cities has allowed house price-to-income ratios to remain relatively low. 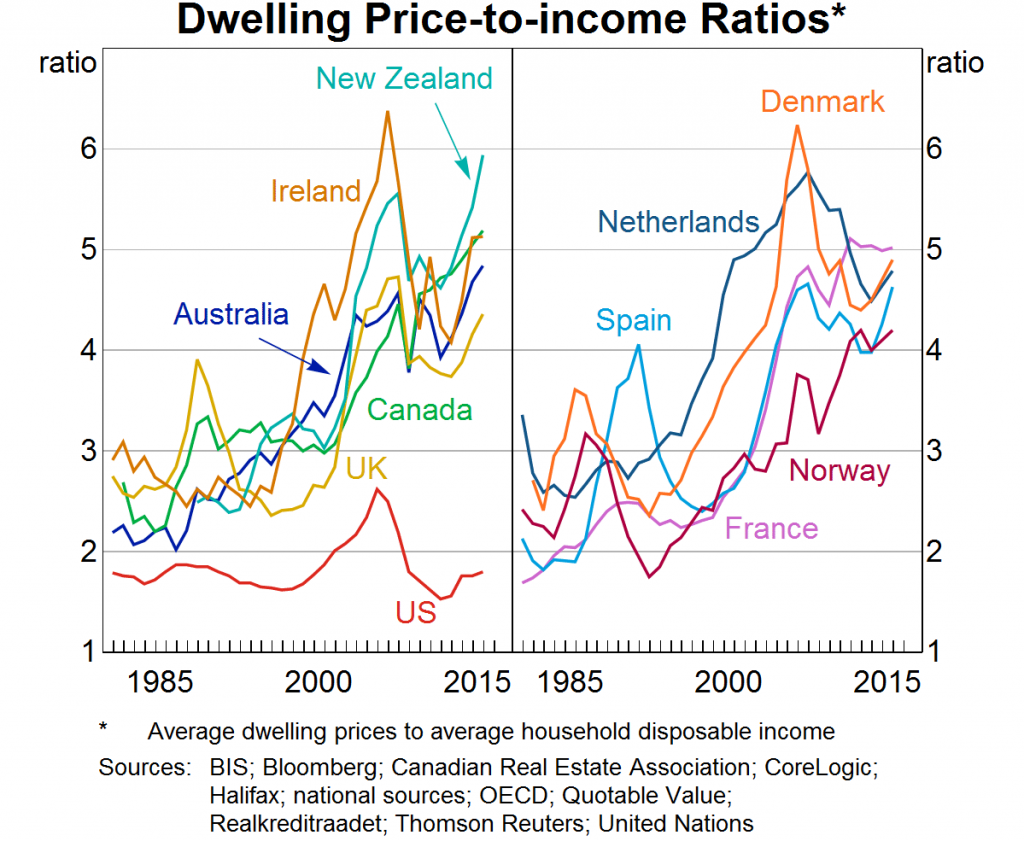 Last but not least is the issue of bank exposure to potential prices declines for inner city apartments in Melbourne, Brisbane and – to a lesser degree – Sydney, due to fears of overbuilding.  This issue was addressed by the RBA in its October 2016 Financial Stability Review report.  The reports suggest up to around 5% of bank mortgage books is exposed to inner city apartments – or around $60 billion – across these three cities. On this basis, it is estimated by the RBA that an increase in default rates to around 5 to 15% on these apartments – of the magnitude seen during the financial crisis – would still result in only quite small losses for banks.   For a more notable impact on banks – approaching collectively several hundreds of millions in dollars – would require a spike in default rates to the 30 to 50% rates seen, for example, in Spain and Ireland. 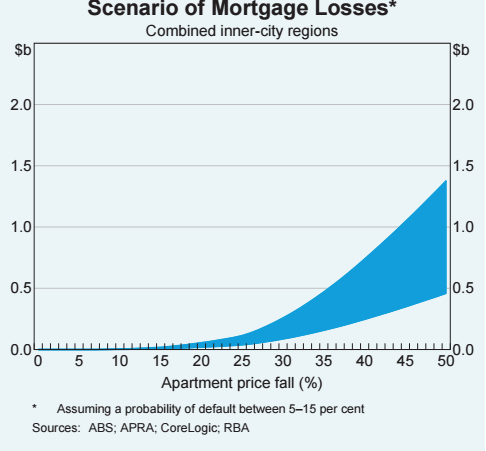 According to the RBA, however, “Australia is not facing the same economic and financial headwinds as Spain or Ireland did during the financial crisis, where the extent of overbuilding was much greater and prevalent across their entire countries.”  Instead, the RBA argues “more likely, any oversupply in Australia would be more localised to certain geographic areas, and potential price falls tempered as the population moved to absorb the new (and cheaper) supply of housing in these areas over time.”

**This estimate is based on the capital city weighted average national median established house price as estimated by the Australian Bureau of Statistics in December 2016, with earlier values derived from the ABS established house price quarterly percentage change series for each capital city. Core-Logic quarterly price increases as used for the March quarter 2017. Income is based on the after-tax household income for a male and female couple average full-time ordinary earnings in each State. Income growth is extended to the March quarter 2017 using the average quarterly gain in each State over the previous four quarters.

**Mortgage affordability is defined as the percentage of income required to service a mortgage on the median priced house assuming a 25 year loan, 20% deposit and the prevailing bank discounted variable mortgage rate.