While hopes of a stabilisation in trade tensions and more policy stimulus (with talk of a US payroll tax cut and German fiscal action) helped to buoy equity markets early last week, all that was dashed by Friday’s tit-for-tat escalation in the trade row.

China’s long threatened retaliatory move came on Friday, with a 5-10% tariff on $US75b of US imports.  This was met with fury by US President Trump, who tweeted threats of further moves and “hereby ordered” US companies to seek alternatives to China.  Trump then announced – after Wall Street’s market close – that he would add a further 5% to all actual and planned tariffs this year.

The question now is – how will market’s react to Trump’s new tariffs? Will China retaliate further and when? And how then would Trump react? Some even suggest Trump could call a state of emergency and severely cut trade and investment ties with China immediately. Given such uncertainty, it would not surprise if global markets suffered further sharp declines in the next few days. S&P 500 futures are already pointing to a 1.1% further fall on Monday.

As it stands, there is simply no light at the end of the tunnel.

Meanwhile, there were tentative signs of stabilisation (at albeit weak levels) in European manufacturing and service sector PMI indices last week – but US PMI’s ebbed ever lower, with the manufacturing index dipping just below 50.  The earlier evident weakness in Asian and European manufacturing is slowly but surely catching up with America, which will ratchet up the pressure on the US President.

My sense is China will not relent, and the question now facing global markets is if and when Trump caves and aims to strike a face-saving deal. My concern is that economic conditions may need to get a lot worse before he crosses that bridge, which is not great news for equity markets and likely means the Fed will be forced to cut rates by at least 50bps at its September 17-18 policy meeting.

On Friday, Powell reiterated the Fed would “act as appropriate” though conceded monetary policy has its limits in the face of massive trade uncertainty. At present, markets fully anticipate a 0.25% US rate cut next month, though only attach a 35% chance to a 0.5% move.

Given this uncertainty, actual current economic data hardly matters.  That said, US durable goods orders tonight will indicate if US capital spending is still holding up – a negative read on this volatile indicator could be taken very poorly by a fretful market. The market will also be hoping that US consumer spending and the Chicago manufacturing index hold up reasonably well on Friday.

The Reserve Bank tried to sound hopeful in the released minutes of its latest policy meeting last week, with hope that recent tax and interest rate cuts could bolster growth over the coming year. The ongoing bounce in Sydney auction clearance rates also suggests that the negative wealth effect on consumer spending from the two-year house price slide are clearly behind us.

That said, with the global outlook appearing ever more negative, further local rate cuts still appear firmly on the table.  Indeed, it remains the case that home building continues to slide and – given global risks – hopes for a decent lift in business investment appear to dim by the day. 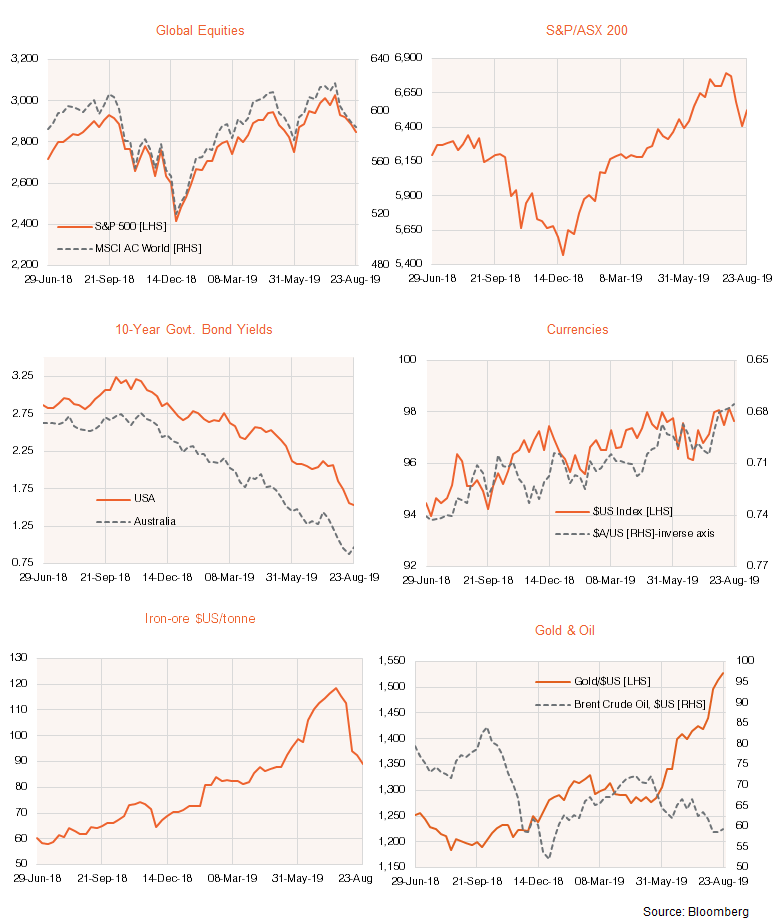 Buckle up – but try and have a great week!