Global equities enjoyed another positive week thanks largely to confirmation that the US and China will engage in another round of trade talks next month. Bond yields pushed higher and gold eased as ‘risk-on’ sentiment tentatively prevailed in markets.

Despite weakness in global manufacturing data, service sector surveys in both Europe and the US last week remained positive – as did the US payrolls report – which has eased fears of a gathering global recession (for now at least).  While Chinese exports and imports remained weak, key surveys of manufacturing and non-manufacturing surprisingly strengthened a little in August. Despite this, China decided to added further stimulus to its economy on Friday through the third cut in bank reserve requirements this year – and the seventh since early 2018.

As regards the trade war, White House Economic Adviser Larry Kudlow appeared to play down expectations for an all-encompassing near-term trade deal, noting it may take a decade to achieve all the trade elements the US wants.  That said, Kudlow was still hopeful for some “near-term results”.  That possibly suggests the US is hoping to secure at least an interim deal of sorts in coming months, if only to help bolster business and investor sentiment – and reduce the risk of recession as Trump heads toward the next election. Of course, we’ll have to see whether Trump can contain his rage and avoid jacking up tariffs yet again if the Chinese prove to be tough negotiators.

Sticking with the US, Fed chair Powell reiterated in a speech that the Fed would “act as appropriate” which suggests it’s quite likely to cut interest rates again at next week’s meeting, though only by 0.25%.

Also helping global sentiment last week was an easing in other global political tensions in the UK, Hong Kong and Italy. Most notably, although the UK outlook remains highly uncertain, what seems clearer is that a “no-deal” UK Brexit is now less likely than was feared – barring a new election and surprise conservative majority victory.

There’s little in the way of major global data this week, aside from US retail sales on Friday. Also on the radar, however, will be the European Central Bank meeting on Thursday, where a new round of stimulus has long been promised by outgoing President Mario Draghi – and so is likely to be delivered.

Australia’s equity market shared in the global rebound last week even though local data was far from inspiring. The $A firmed and local 10-year bond yields rebounded a chunky 0.2% – to push back above 1%.

At 0.5%, Q2 GDP growth was soft, though at least not worse than expected. Annual growth is now at its weakest since the financial crisis, though as yet the unemployment rate has remained remarkably well-contained.  Monthly retail sales, however, were abysmal – declining by 0.1% in July.  The great hope is that recent interest rate and tax cuts will boost flagging private demand sometime soon, and an easing in trade tensions can come through quickly enough to avoid a cut back in already only modest business investment plans.

In this regard, key readings on business and consumer sentiment through the NAB (Tuesday) and Westpac (Wednesday) surveys will shed light on the extent to which stimulus in the pipeline is at least raising ‘animal spirits’.   So far at least, there’s not been much of a bounce in either sentiment indicator, though fatter tax returns are only now filtering through to consumer wallets.

My base case remains that the RBA will hold off cutting rates in October, if only to save ammunition and allow a little more time to assess the impact of recent monetary and fiscal stimulus. As tradition demands, however, I think the RBA will be busy on Melbourne Cup day. 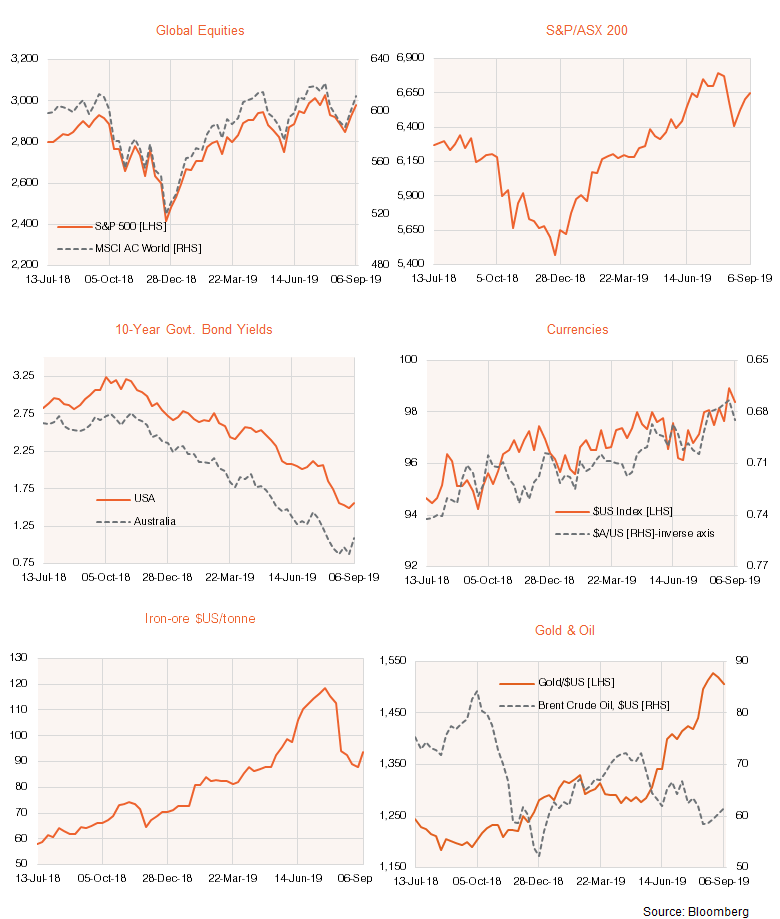