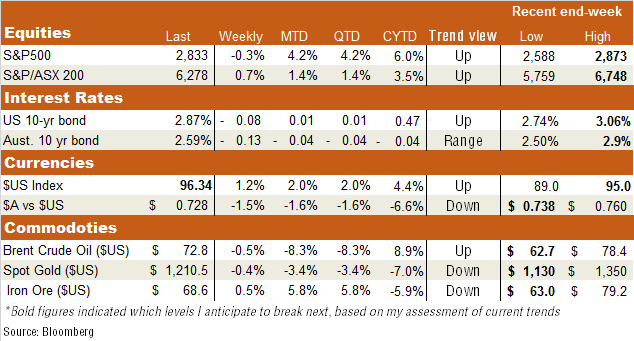 It was a mixed week for global markets with lingering optimism over the US economy tempered by concerns surrounding emerging markets in the wake of financial volatility in Russia and Turkey. US sanctions have unnerved investors in these markets, culminating in Turkish President Tayyip Erdogan even cajoling his citizens to buy up the beleaguered Turkish lira. They appeared to do the opposite, with the lira dropping a further 20% last week against the $US.

Data wise, the highlight last week was the US July CPI, which revealed core inflation (i.e excluding volatile food and energy) rose at an annual rate of 2.4%. Although in line with market expectations, it nonetheless marked a further acceleration in the annual rate from a recent low of only 1.7% in August last year. As seen in the table below, the two key major measures of US underlying inflation are now hovering around the top-end of their respective ranges of recent decades – the key issue now is whether annual inflation starts to level off (which I expect) or accelerates further. Note, the latest median forecast (among Fed voting members) is for core annual PCE inflation to end the year at a relatively benign 2%, or only a touch higher than the last reading of 1.9% in June.

Either way, US inflation is firm enough to suggest the Fed is almost certain to raise rates again in September, and most likely in December also. In turn, the $US has technically broken out in recent weeks, pushing beyond its previous peak level in late-2017. The $A has accordingly also technically broken down, pushing below US 73c, with the next critical test of support around US72c.  With the RBA last week affirming it expects inflation to rise only slowly – and rates could remain on hold for potentially at least a year longer – the $A seems unlikely to get local interest rates support anytime soon.

A weaker $A, in turn, could further support the local sharemarket given the importance of offshore earnings to many companies. Although it’s early days, the local earnings season so far has been encouraging, with CBA’s result last week in particular being better than feared.

China’s monthly “data dump” – covering investment, industrial production and retail sales – will attract attention today, though it seems unlikely to suggest anything other than the economy is holding up reasonably well. In Australia, another benign reading on wage inflation (annual rate close to 2%) is likely when the wage price index is released on Wednesday, while Thursday’s labour force report is likely to show the unemployment rate is struggling to push much lower (thanks to rising labour force participation and high immigration) despite solid underlying employment growth. The RBA last week forecast the unemployment rate would drop to 5% (from 5.4% at present), but not before the second half of 2020!

Globally, US retail sales on Wednesday should show that consumer spending in the world’s largest economy will continue to hum along nicely.