Confidence returned to global equities last week – after a modest pull back over the previous week – largely due to reassuring US economic data.  US retail sales rebounded nicely in January – after worrying softness in Q4 – while the US CPI also remained comfortably benign.  Lurking in the background is growing confidence that the US and China will eventually settle their trade differences, although there is no longer an explicit deadline in place. Even more important than the actual deal itself is growing recognition that neither side appears to have the appetite to escalate tensions further – through tit-for-tat tariff increases.  In terms of key market moves, US and Australian 10-year bond yields broke to new lows in the downtrend that has been in place since late last year.

Economic news was less reassuring elsewhere.  German industrial production was weaker than expected in January, though temporary factors like strikes and model change-over disruptions were blamed. China’s monthly “data dump” was also soft, with ongoing weakness in retail sales and industrial production – though again hope springs eternal that the Government is set to re-stimulate the economy.

There’s little major economic data in the United States this week, with the key focus being Wednesday’s Fed meeting.  Specifically, Wall Street is hoping the median expectation for policy tightening this year among voting Fed members (as revealed in the updated quarterly “dot plot” diagram) is revised from two rates hikes to only one or none.   Recall that back in December the Fed’s dots were revised to show only two rate hikes this year instead of three – and more recently Fed chairman Powell has indicated he’ll be “patient” before deciding to lift rates again. The market has already priced out any risk of further policy tightening this year and now attaches a small chance to a year-end rate cut.

Given America’s still reasonable economic outlook I suspect the Fed will either stick with the currently projected two rate hikes, or scale back to only one.  The former would be disappointing to the market, while the latter could provide a market boost.  While the Fed could remove all projected policy tightening, that could perversely cause stocks to drop due to fears about what the Fed “must know” about the growth outlook.  Also important in this meeting will be any further clarity on when and if the Fed will halt its balance sheet rundown program later this year.

In Australia we’ll get RBA minutes and the ABS quarterly measure of house prices on Tuesday, and the employment report on Thursday.  The RBA is likely to stick with its new neutral outlook, while we can expect more negative house price headlines when the ABS data merely confirms what we already know from the more timely Core-Logic monthly data.  Despite a gradual weakening in lead employment indicators, moreover, the February labour market report is likely to remain reasonably solid – with moderate employment growth and a steady unemployment rate of around 5%.

Have a great Week! 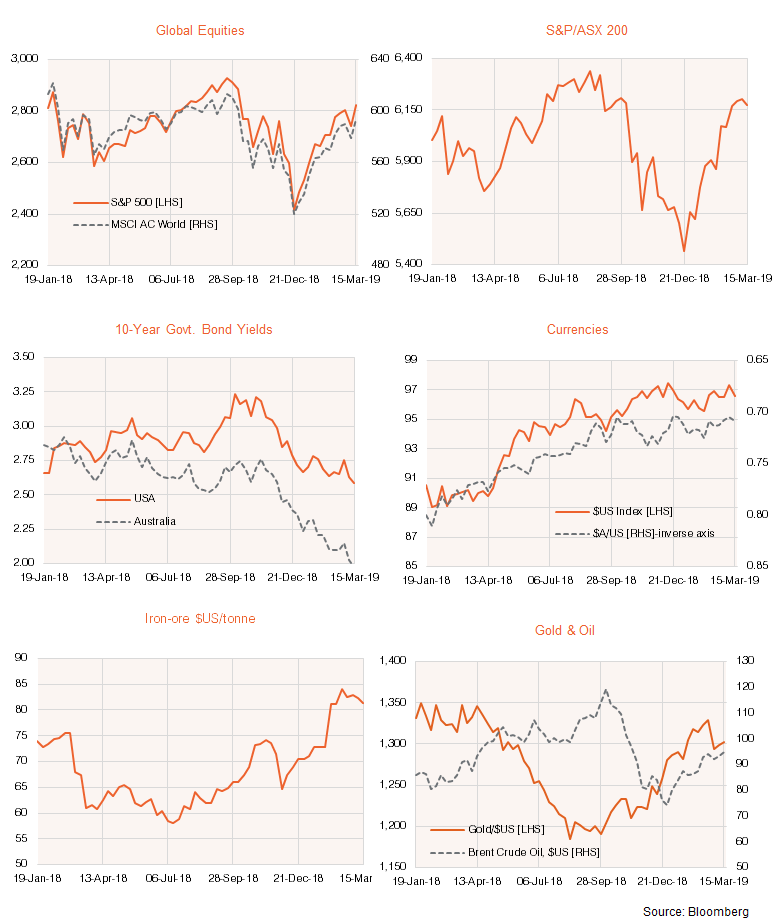