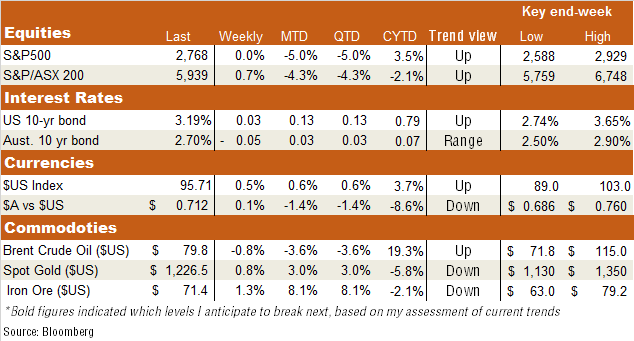 An “uneasy calm” is perhaps the best way to characterise global markets last week – with little in the way of major events and investors only left with their nerves to deal with.  The release of the latest Fed minutes only affirmed its intent to keep raising rates – which supported the $US – while tensions between Italy and the EU also added to investor caution.

While oil prices eased due to a strong US inventory build, new doubts also emerged over whether Saudi Arabia is willing (and able) to boost supply in coming months to make up for the sanction-induced looming reduction in Iranian exports.

Although early days, America’s earnings reporting season also remained encouraging – according to FactSet, of the 20% of S&P 500 companies that have so far reported, 80% have beaten expectations.  Given investor nervousness, however, these results were dulled by growing talk of a possible post-tax cut slowdown in US earnings growth in 2019.

In Australia, the highlight was a larger than expected drop in the unemployment rate to 5.0%, which led to chatter about a potential bring-forward of RBA rate hikes.  Given interest rates remain at very low levels, and the $A is now a lot more competitive, to my mind the RBA would likely be contemplating higher rates – potentially by year-end – were it not for the risk that this, along with tightening lending conditions, could combine to destabilise what still remains an “orderly” correction in Sydney and Melbourne house prices.

That said, if the economy retains its current momentum (which is partly dependant on the home building pipeline), a rate hike by February 2019 is not out of the question. After all, if the unemployment rate has fallen much faster than the RBA expected, it follows that the timing of the inevitable lift in official rates could also be earlier than previously anticipated.  Watch this space!

Global highlights this week include US Q3 GDP, which is expected to show economic growth slowed to a (still firm) 3% annualised rate from 4.2% in the June quarter.   The US earnings reporting season also rolls on, with critical reports from some tech darlings – Microsoft, Amazon and Alphabet – due mid-week.   Last quarter, tech earnings remained very strong, which brought some relief to nervous investors at the time. We’ll also need to keep tracking developments in Italy and Saudi Arabia.

With little major economic data in Australia, local interest will be focused on the corporate outlook gleaned from a slate of annual general meetings.