Inversion of a key US yield curve measure (the gap between US 10-year and 2-year Federal Government bond yields) sent jitters through Wall Street last week, as did further signs of softer economic growth in Europe and China. The global stock pull back continued as did the rally in bond and gold prices.

As I’ve previously argued, I think the inversion of the US yield curve is not necessarily sending a signal of impending recession or bear market – and even if it were, history suggests we’ve got at least a year to keep dancing.

That said, other concerning news was a negative print for German Q2 GDP and much weaker than expected industrial production and retail sales in China.  US manufacturing output was also weak in July.  As a major capital goods exporter into Asia, Germany is among those most exposed to ongoing trade tensions, especially given growing signs of postpone in corporate investment plans.  China’s slowdown is also trade induced, though new emissions standards appears to be at least temporarily also hurting car sales.  Importantly, both the European Central Bank and Chinese authorities last week signalled further policy stimulus may be in the pipeline.

Of course, the good news globally last week was US President Trump’s decision to at least postpone some planned tariff increases (on voter sensitive consumer electronics) until mid-December.  US July retail sales were also stronger than expected – highlighting the fact that US consumers remain the mainstay of the economy.

Global highlights this week include Fed minutes on Wednesday and a speech by Fed chair Powell on Friday.  I expect Powell to hint at a likely further rate cut at the September policy meeting, which should provide at least some comfort to the markets in the face of clearly weakening global industrial activity. 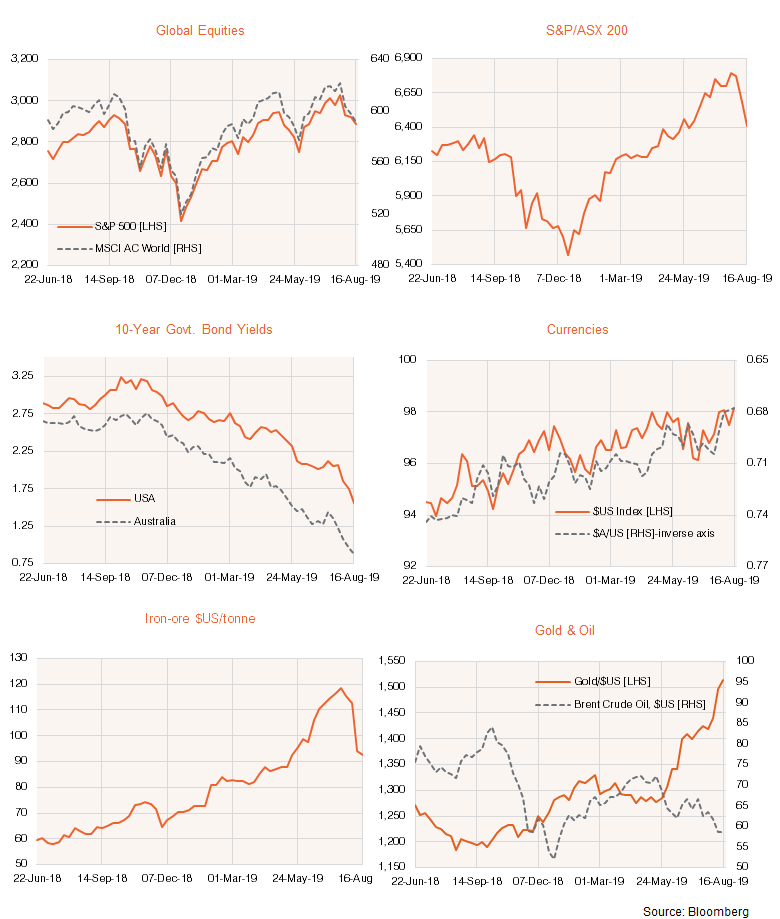 The drop back in iron-ore prices and ongoing global concerns saw the local equity market give back further ground last week. Local 10-year bond yields are now comfortably below 1%, while the $A dropped to new 6-monthly lows. The S&P/ASX 200 equity index is down 5.7% from its end-week high of 6,793 on 26-July.

That’s despite last week’s news that employment rose a stronger than expected 41K in July and the unemployment rate held steady at 5.2%.  The ongoing underlying strength in employment remains impressive but increasingly at odds with the weakness in lead employment indicators and domestic demand.

All up, however, the lingering strength in the labour market suggests the RBA is likely to wait at least a month or two longer before contemplating another cut in rates (possibly on Melbourne Cup day!).

There’s little key data in Australia this week, with a focus on a spate of corporate results from the ongoing year-end earnings reporting season. As might be expected given the sluggish economy, however, expected growth in overall Australian corporate earnings remains fairly muted, especially compared to the still encouraging US outlook.